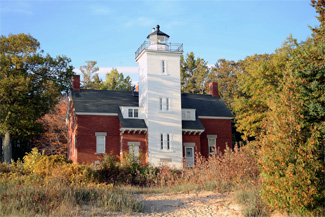 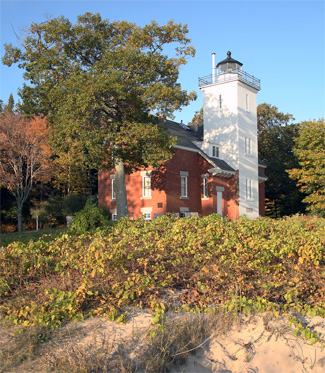 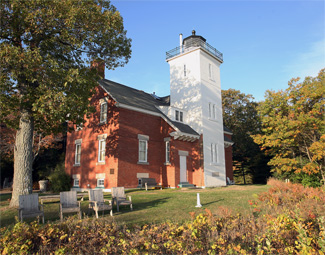 Hammond Bay on Lake Huron is located roughly forty miles southeast of Mackinaw City, and in 1890, the Lighthouse Board recommended Forty Mile Point, just east of the bay, as the site for a lighthouse. Cheboygan and Presque Isle light-houses are about 50 miles apart, wrote the Board, with no aid to navigation between them. Considering the magnitude and value of the commerce of this vicinity the distance unmarked by a light is far too great. A light-station is needed about midway between the two. It should have not only a fog-signal, but also an efficient coast light.

After repeated requests, Congress finally provided $25,000 for the station on August 18, 1894. Negotiations for the nearly twenty-seven-acre lighthouse parcel started in September, and the deed for the site was finalized the following June. Contracts to supply the fog signal boilers and metalwork for the station were made in 1895, and on July 5, 1896, the tender Amaranth landed a work party and construction materials at the site. A 120-foot-long landing dock was built that was topped by a tramway whose rails would lead to the fog signal building and on to the lighthouse.

A redbrick fog signal building, with a hipped roof covered in corrugated iron, was constructed near the shore to house ten-inch steam whistles. The lighthouse, also built of red brick, featured a twelve-foot-square tower centered on the lakeward face of a two-story duplex. Each of the lighthouses mirror-image apartments had six rooms and an iron door that led into the tower, where a circular, cast-iron stairway provided access to the octagonal lantern room. The tower stands fifty-two feet tall and originally housed a fourth-order, L. Sautter lens. Equipped with six bulls-eye panels, the lens revolved once every minute to produce white flashes spaced by ten seconds. The lighthouse was finished in October, and during November, the fog signals were piped and tested. After work wrapped up on November 23, 1896, a custodian was placed in charge of the station for the winter.

Forty Mile Point Lighthouse is very similar to Big Bay Point Lighthouse, which was also built in 1896. Besides the lighthouse and fog signal building, the station at Forty Mile Point was also equipped with a frame boathouse , a wooden barn, an oil house and two privies built of red brick, and a well, equipped with a windmill and water tank. Pipe was laid to carry water between the windmill and the cellar of the duplex, but by 1910, the windmill had blown over, and water had to be carried from the lake for use in the dwelling.

Keeper Xavier Rains transferred from Round Island Lighthouse on St. Marys River to become the first head keeper at Forty Mile Point, and on April 30, 1897, he wrote the following in the stations log: We got everything ready and lit up at sunset. Raining all day and night, blowing almost a gale from the North. The station was staffed by two keepers, and Edward J. Lane was transferred from Devils Island Lighthouse to serve as the stations first assistant keeper.

On October 19, 1905, the wooden steamer Joseph S. Fay was downbound on Lake Huron with the schooner-barge D.P. Rhodes in tow. Both vessels were loaded with iron ore and were bucking heavy seas. When the ships rolled in opposite directions, the strain on the towline became too great, and the Rhodes broke free, taking a portion of the Fays stern with her. The captain of the Fay quickly turned the steamer landward, hoping to reach shore before sinking. When the Fay struck a sandbar, the forward portion of the vessel tore free and washed ashore with the captain and ten crewmen safely inside. The following account of the shipwreck was recorded in the keepers log at Forty Mile Point Lighthouse: At 8:30 p.m. last night the steamer, J.S. Fay, came ashore here in a sinking condition. She soon broke up. Most of the crew came ashore on the Pilot House. Three men swam ashore, the mate was drowned.

Keeper Rains served until 1911, when John E. Smith, who was serving as his assistant, was promoted to head keeper. Rains was reportedly transferred elsewhere, but in 1912, he was back at Forty Mile Point serving as Smiths assistant, a position he held until retiring in 1921 at the age of seventy. Keeper Smith was awarded the efficiency flag for having the districts model station in 1912, 1913, and 1925.

On July 20, 1914, the illuminant was changed from oil to incandescent oil vapor, greatly increasing the intensity of the light. The characteristic of the light was altered on May 15, 1919 to occulting white, showing fifteen seconds of light followed by a fifteen-second eclipse through the introduction of a new Fresnel lens. In 1942, the light was electrified, and the period of the occultation was reduced from thirty seconds to ten seconds. A fixed, fourth-order Fresnel lens, manufactured by Henry-Lepaute, is used in the lighthouse today.

The steam whistle was typically in operation about 225 hours per year and consumed roughly seven tons of coal. In 1905, the iron smokestacks for the boilers were replaced by a three-foot-square brick chimney. A modern compressed air plant, operated by diesel engines and linked to type F diaphones, replaced the steam boilers and whistles in 1931. This change made the fog signals immediately available during periods of thick weather.

To determine the efficacy of the new fog signal, the following experiment was conducted on July 15, 1931:

The tender Amaranth left the station on a course for Spectacle Reef, 22 ½ miles distant. This course was held throughout the test and was at an angle of about 70 degrees from the axis of the resonators. The wind was light southeasterly, weather clear, and no sea. The diaphone was operated on its regular schedule, a 3-second blast every 30 seconds. The blasts were divided into a 1-second high note and a 2-second low note.

Close to the station the low note seemed to have less power than the high. While the tender proceeded on her course the high note was heard to a distance of 7 miles, only one blast being heard beyond that point. The low note was carried 11 miles, only two blasts being missed in that distance. For nearly the entire distance the intensity of the low note was such as to require no special attention to hear it.

Clarence P. Tupper served as the final civilian keeper of the lighthouse. His last entry made on December 31, 1943 reads: Keeper working on inventory a.m. Went to town to get car from garage. The following day, Coast Guard personnel took charge of the lighthouse.

The lighthouse was automated and de-staffed on January 1, 1969. After subsequent vandalism, the Coast Guard quickly moved to dispose of the property. All of the station, save 2.4 acres surrounding the lighthouse, was transferred to Presque Isle County on August 16, 1971 as part of a Legacy of Parks program. The deed to the lighthouse itself was awarded to the county on November 23, 1998, and since then the county and 40 Mile Point Lighthouse Society have restored the stations structures.

Guest Lighthouse Keepers, who reside nearby in their own RVs, give tours of the lighthouse and operate a gift shop in the stations barn. Visitors can also tour the pilot house from the 1912 steamer Calcite, which sailed on the Great Lakes until being scrapped in 1961, and walk up the beach to view the remains of the wooden steamer Joseph S. Fay. The fog signal building is currently used as a pavilion.

For a larger map of Forty Mile Point Lighthouse, click the lighthouse in the above map.

Forty Mile Point Lighthouse and outbuildings are open every day but Mondays from 10 a.m. to 4 p.m. from Memorial Day weekend to mid-October. The lighthouse is home to a museum. The tower is open for climbing during visiting hours.