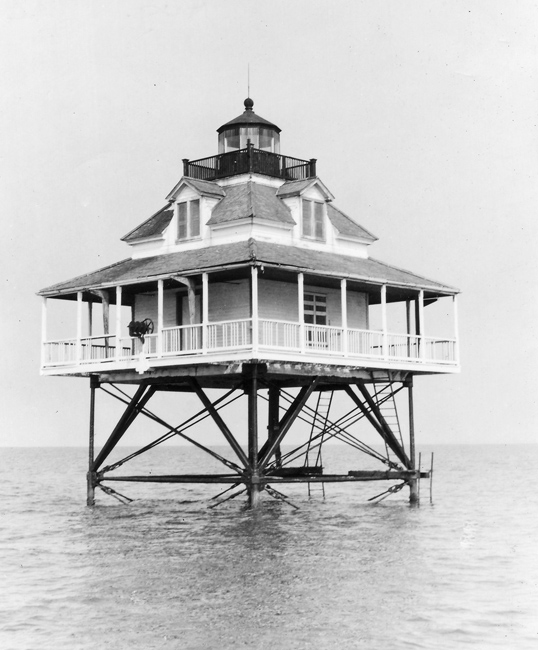 1857  The Merrill's Shell Bank light-vessel occupies an important position on the line of steamers and sail vessels; but as it is necessarily kept up at the usual expense of light-vessels without affording as reliable a light as a permanent structure, and as this is an old vessel, requiring frequent and extensive repairs, it is respectfully submitted that it would be great economy to substitute a small iron screw-pile foundation light at a cost of about $12,000.

1860  A screw pile light-house has been erected on Merrill's Shell Bank, as a substitute for the light-vessel formerly at that place, and the light was exhibited for the first time on the night of 10th August last.

1863  The screw-pile structure at Merrill's Shell Bank was found in measurably good condition. A new illuminating apparatus was provided, the necessary repairs made, and the light re-exhibited.

1866  The illuminating apparatus at Merrill's Shell Bank light-station has been changed from a fifth order to a fourth order lens, the wants of navigation of the locality rendering the change advisable.

1869  Merrill's Shell Bank, Mississippi Sound.A fog-bell has been furnished during the year. A cooking-stove and rope for boat-hoisting tackles supplied.

1880  Merrill's Shell Bank, Mississippi Sound, Mississippi.The shingle roof of this station caught fire in June, and burned slightly, doing but little damage. Orders have been given for its repair. The station is in good order.

1881  MerriIls Shell Bank, Mississippi Sound, between Cat Island, Saint Joseph's, and Grand Island, Mississippi. The station was painted throughout and the wood-work was repaired. The iron foundation-piles were scaled, scraped, and coal-tarred. The station is in good order.

1884  Merrills Shell-Bank, north side of main channel of Mississippi Sound, between Cat Island, Saint Joseph's Island, and Grand Island, Mississippi. This structure was burned on the morning of September 6, 1883, when everything was completely destroyed, leaving only the five iron piles upon which the superstructure was built. A new house was erected on the old iron piles, after the style of the Northwest Passage light-house, modified to fit the iron piles already driven. Material was ordered and work was commenced on the new house in September, and the new light was exhibited on November 20,1883. The new structure has a slate roof, is furnished with a cistern of 1,360 gallons capacity, and it has one of the Luckey boat hoisters. This station is complete and in good order.

1892 - 773. Merrill Shell Bank; between Cat Island, St. Joseph Island, and Grand Island, Mississippi.The iron ladder from the water to the first landing was renewed with one taken from South Pass depot. The old gutters were renewed with galvanized iron gutters and pipe. Various repairs were made.

1929  Charles H. Carlson, keeper of Merrill Shell Bank Light Station, Miss., rendered assistance on July 29 to two persons who were adrift in a disabled motor skiff. He towed them into Pass Christian that night, returning to the station the next morning.

For a larger map of Merrill's Shell Bank Lighthouse, click the lighthouse in the above map.