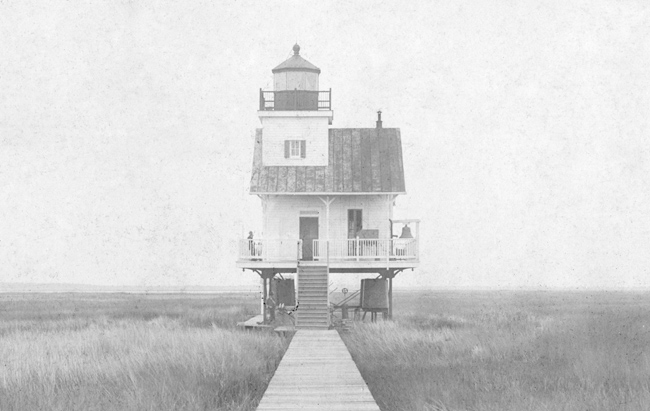 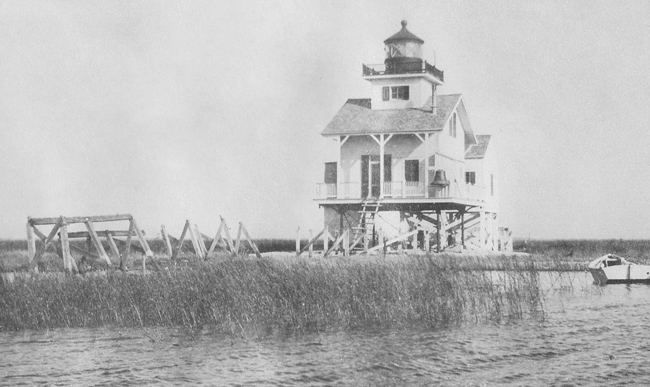 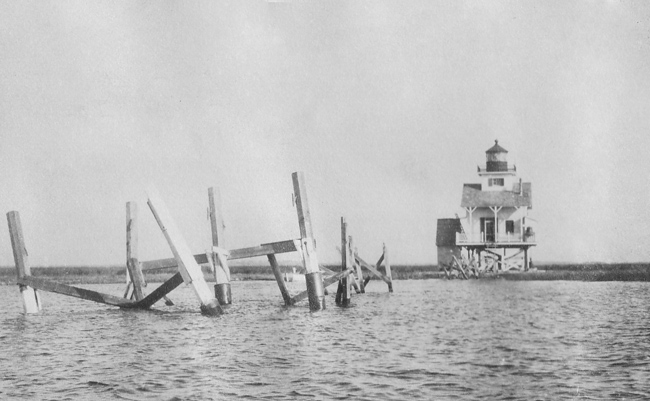 1889  Lake Borgne, on south end of Lower Point Clear, entrance to Lake Borgne, Mississippi.Work on this station is begun; the foundation is in and the frame up. It is probable the station will be completed in two months or less.

1890  Lake Borgne, near the southern extremity of Lower Point Clear, about 100 yards from the beach and 500 yards from the north edge of Grand Island Pass, entrance to Lake Borgne, Mississippi Sound, Mississippi. This structure has a screw-pile foundation, surmounted by a wooden dwelling containing seven rooms, with a fifth-order lantern on a tower on the end of the dwelling, displaying a fixed white light, the focal plane of which is 42 ¼ feet above mean low water. The lantern is painted black, the dwelling white, with green blinds, and the roof of the dwelling brown. The iron foundation piles and cisterns underneath the dwelling are painted brown. A fog-bell of 800 pounds weight is placed on the gallery on one side of the dwelling and is struck by Stevens' clockwork machinery one blow every 20 seconds. The dwelling is connected with a small wharf, built on creosoted piles, by a walk 382 feet long, 5 feet wide, and 3 ½ feet above mean high tide. The light was first displayed on September 1, 1889.

1894  Lake Borgne, entrance to Lake Borgne, Mississippi.  The tine roof was blown off in the storm of October 1, 1893, and the boathouse and wharf were carried away. The station was put in repair.

1900  Lake Borgne, near Lower Point Clear, Mississippi.A platform was built under the keepers dwelling. The foundation was scaled, scraped, and painted. A new plank walk 2 feet wide and 48 feet long was laid. The planking on the wharf was taken up; 60 gas-pipe piles were taken up, the ends plugged and put down again, and the capping, braces, and planking were renewed. The boathouse was repaired.

1901  Lake Borgne, near Lower Point Clear, Mississippi.Some twenty-one pine piles were driven under the wharf and coppered from 2 feet below the bottom to 2 feet above mean high water. Various repairs were made.

1902  Lake Borgne, in the marsh near the southerly point of Lower Point Clear, Mississippi.Three new cisterns were built. A boathouse was built. A plank walk 323 feet long, leading from the boathouse to the dwelling, was built. About 260 feet of plank walk was built between the dwelling and the bayou. A space 50 by 50 feet under and around the dwelling was filled with oyster and clam shells and earth to a depth of 3 feet and graded. Various repairs were made.

1908  Lake Borgne, Mississippi.Amount appropriated, act February 15, 1908, $7,000. Plans and specifications for rebuilding the station were prepared and bids solicited by poster and circular-letter advertisement. A contract was entered into with the lowest bidder and materials were delivered and work of construction begun June 21, 1908.

1911  Lake Borgne, Miss. - The act of February 15, 1908, appropriated $7,000 for rebuilding the lighthouse, fog signal, wharf, and quarters for keeper at the Lake Borgne light station, Miss. The station was rebuilt in 1908, and an acetylene lens lantern light has since been shown therefrom. During the past fiscal year a fifth-order circular iron lantern was purchased for this station for the purpose of exhibiting an oil light and abandoning acetylene, and this will shortly be installed. Up to June 30, 1911, $6,664 had been expended on this work; the unexpended balance on June 30, 1911, was $336.

1912  Lake Borgne, Miss.The act of February 15,1908, appropriated $7,000 for rebuilding the lighthouse, fog signal, wharf, and quarters for keepers at the Lake Borgne Light Station, Miss. The station was rebuilt m 1908, and an acetylene lens lantern installed. On October 31, 1911, a fifth-order circular iron lantern was installed in place of the acetylene lens lantern, and a fifth-order oil light is now being shown, completing the project at a total cost of $6,899.49.

1915  Frederick A. Schrieber, keeper, maintained light under trying conditions during hurricane. Hurricane was on September 3 and 4, 1915.

1917  Repairing and rebuilding aids to navigation, Gulf of Mexico.The act of February 28. 1916, appropriated $200,000 for repairing and rebuilding aids to navigation damaged or destroyed by hurricanes on the Gulf of Mexico. There is given below a list of the work that has been completed and that is in progress, in addition to which there is certain work that has not yet been reached, every effort having been made to restore aids to navigation before less important work was commenced. During the fiscal year the following portions of the work have been completed: Lake Borgne Light Station, Miss.: Materials have been assembled to rebuild boathouse, wharf, walks, steps, platform, etc.

1931  The keeper of Lake Borgne Light Station, Miss., S.R. White, has just completed the work of encasing the creosoted piles between the dwelling and the boat house at that station. The entire job was completed without outside assistance and at no cost to the service except that for materials. The work extended over a period of two years and was done at favorable stages of the tide. The keeper has been commended for the work.

1931  A storm which struck the Louisiana coast on July 14 and 15 did considerable damage at several light stations. At Pass Manchac Lighthouse the breakwater bulkhead was damaged and rock which had been placed alongside it washed out. The station launch was sunk but was later raised by the tender.

At Barataria Bay Lighthouse rock which was placed last year was washed away to some extent, and there was further caving in of the earth fill on which the tower rests.

At Timbalier Lighthouse the keeper reports that heavy rocks recently placed at this station were badly washed out by the seas, and that there is now a hole under the dwelling.

At Lake Borgne Lighthouse the wharf was slightly damaged, and at South Pass East Jetty Light there was some damage. Gulfport Channel Light Buoy No. 2, Miss., sank at its moorings but was later recovered.

1931  S.R. White, keeper, Lake Borgne Light Station, Miss., picked up two men from the schooner Noll M, which went shore near the station during a gale, on July 15.

For a larger map of Lake Borgne Lighthouse, click the lighthouse in the above map.