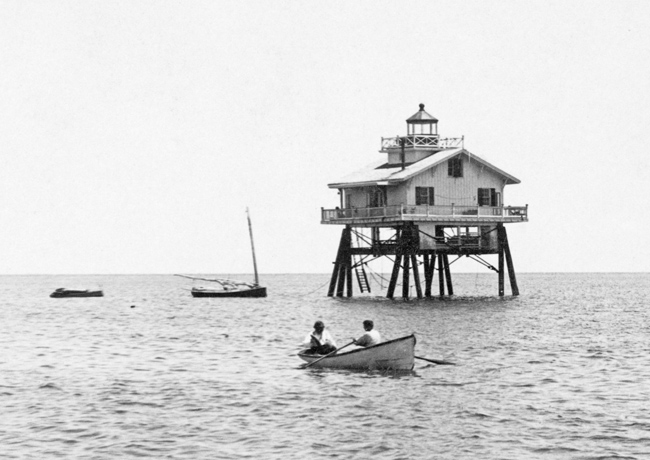 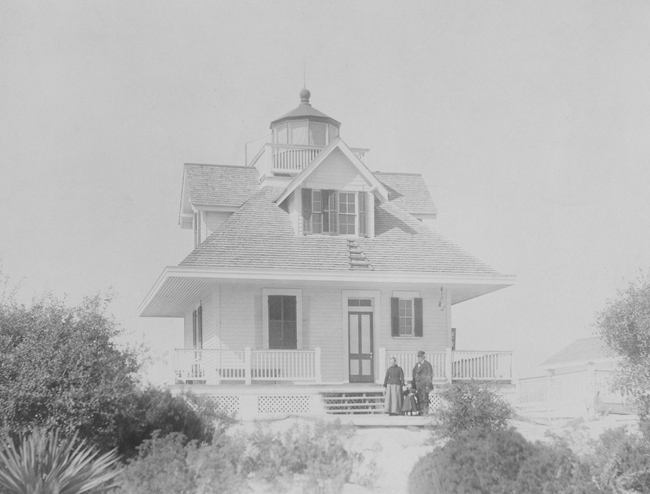 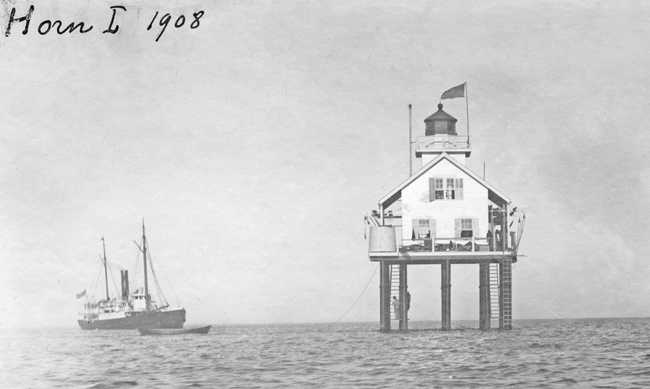 1868  The growing importance of Pascagoula river, which penetrates far into the rich pine forests bordering the northern shore of the Mississippi sound, the artificial deepening of the bar of the river and the natural deepening of the entrance called Horn Island Pass, have induced the Board to recommend, after thorough examination of the subject, the erection of a new light-house on Horn island. The ground is very favorable, being hard sand, and more elevated than Ship island. The surrounding country affords lumber and brick of excellent quality, and a brick structure is recommended as less costly than any other of sufficiently permanent character. Vessels of 14 feet draught of water can find safe anchorage in storms under the lee of this island. An appropriation of $20,000 will be required for this light-house, and the necessary estimate will be submitted.

1873  Horn Island Pass, Mississippi Hound, Mississippi.The appropriation of $22,000 asked for in the last annual report having been granted, a survey of the Pass and eastern end of Horn Island was made to decide upon a plan and location for the light-house. The result of the observations was, that a fourth-order wooden structure on iron screwpile, similar to that at Cat Island, was found to be the most suitable for the objects intended. The plans being all ready, proposals for the iron-work were invited, bids were received and opened on the 2d day of July, and the contract for the iron-work of foundation and lantern awarded to a firm in Baltimore, to be completed on or before the 21st day of October next. The superstructure will be got out by hired labor, and the building erected by the same means. It will stand on the eastern end of Horn Island, a sandy point elevated 3 feet above the water. It is expected that before the next spring the light will be in operation.

1874  Horn Island Pass, Mississippi Sound, Mississippi.The iron-work of the foundation and lantern of this light-house was prepared and delivered on board a vessel during the month of October, 1873. On its arrival at Fort Morgan, Ala., it was stored until the framing of the wood-work of the dwelling was completed. In the month of January, 1874, the entire structure was sent to the station in the light-house tender Pharos, and preparations were immediately made for putting down the foundation-piles. The breaking of all the foundation-screws caused considerable delay. They were replaced by an entirely new set. While awaiting the casting of the new screws, the working-party were employed in making repairs in another portion of the district. In the latter part of March, operations were resumed, and the five foundation piles at last successfully planted. The work was then vigorously prosecuted, and the building completely finished in the early part of the month of June, 1874. The light was exhibited for the first time on the evening of the last day of the same month. The structure consists of five iron screw-piles, upon which is placed a square wooden dwelling, surmounted by a lantern with iron parapet. The lens-apparatus is of the fourth order, showing a fixed white light, varied by red flashes.

1875  Horn Island, Mississippi Sound, Mississippi.A fog-bell struck by machinery, which was authorized by act of June 23, 1874, has been placed at this station.

1879  Horn Island, Mississippi Sound, Mississippi.The house was repainted throughout, a hanging platform put up underneath for stores and fuel, the fog-bell removed from the gallery and hung in front of a dormer on the southern roof of the dwelling.

1880  Horn Island, Mississippi Sound, Mississippi.The beach on the Gulf side of the light-house having been washed away to such an extent as to threaten the building, a brush bulkhead with projecting jetties was built for its protection. As long as the bulkhead and jetties remained in place, the shoreline was advanced about 60 feet. During the heavy weather which prevailed in March and April the entire work was carried away. A contract has been made for moving the building across the island to its north side, where it will be placed on wooden creosoted piles, each of which will penetrate about 60 feet below the surface of the sand.

1881  Horn Island, Mississippi.The light house was removed about 100 yards to the north from its former position.

1881  Horn Island, off north shore of Horn Island, Mississippi.The light-house was moved across the island, from the south to the north side, and placed on thirteen creosoted piles, each penetrating about 60 feet into the earth. The entire structure was painted inside and out, and all needed repairs were made. The station is in good order.

1882  Horn Island, off north shore of Horn Island, near its eastern extremity, Mississippi.A little more than a year ago this station was moved about 300 feet across the island, so as to be on its northern side, within the waters of the Mississippi Sound, but the island has again worked over and built up to the northward of the light-house, and the station is now again in the Gulf. As the creosoted piles on which the superstructure, stands penetrate about 50 feet into the sandy bottom, there will be little danger to the station for several years to come. Iron tension-rods were fastened to the foundation piles to stiffen the structure. Mineral-oil lamps were fitted to the station, which is in good order.

1883  Horn Island, in the Gulf, off the south shore of Horn Island, near its eastern extremity, Mississippi.The land is still being washed away in the vicinity of the light-house. The foundation-piles of the structure are now about 100 feet from the shore, in water 7 feet deep. As the piles penetrate 50 feet into the sand, the light-house is in no danger. The old iron foundation-piles were taken up and stored at the depot at South Pass. The station is in good order.

1884 - 475. Horn Island, in waters off south shore of Horn Island, Mississippi, about 1,300 feet from the extreme eastern end.There was but little if any change to the island in the past year. The beach is about 110 feet on the north side from the light-house, and the depth of water under the house is about 7 feet.

1885  Horn Island, about 1,300 feet from the eastern end of Horn Island, Mississippi.This light-house stands in water 7 feet deep, on five creosoted piles. In heavy gales the vibration of the lens is so great that it is difficult to make the revolving machinery move with regularity. This light will soon have to be again moved to insure its safety. Sundry minor repairs were made here.

1887  Horn Island, on the north shore of Horn Island, about 6,585 feet from the eastern end, Mississippi.This station was rebuilt on Horn Island. It is a one and a half story framed structure, with a lantern on top, the dwelling containing a living room and kitchen, three bedrooms, a pantry and a work-room. An oil-house and wood-shed, and a new cypress cistern with a capacity of about 4,320 gallons were built separately. The lens and illuminating apparatus were removed from the old to the new structure. The old structure on creosoted piles was dismantled, the doors and windows, lantern, lantern-glass, fog-signal bell and apparatus were all removed to the depots at South Pass and New Orleans, La. The foundation piles and old frame of the house were left as a day mark.

1889  Horn Island, on the eastern end of Horn Island, Mississippi.A barbed-wire fence, 1,000 feet long, was put up across the island to protect the grounds of the station from being overrun by cattle. The station is in good order.

1893  Horn Island, eastern end of Horn Island, Gulf of Mexico, Mississippi.A topographical survey of this reservation was made during the year.

1895  Horn Island, Gulf of Mexico, Mississippi.A second-order oil house was, in September, 1894, built by contract. Minor repairs were made.

1897  Horn Island, Mississippi.A new cistern foundation was built and a new cistern 9 by 10 feet erected. Various repairs were made.

1898  Horn Island, on sand hill near eastern end of Horn Island, Mississippi.A fence 240 feet long and 5 feet high was built around the keeper's dwelling. A platform was built in the rear of the building and one on the front of the dwelling. Minor repairs were made.

1899  Horn Island, on the east end of Horn Island, Mississippi.A set of chariot wheels was installed as repairs to the illuminating apparatus. A new cypress cistern was furnished.

1900  Horn Island, on the east end of Horn Island, Mississippi. Materials were purchased and delivered at the station. The wharf was rebuilt. The dwelling was overhauled and repaired and a new cistern was installed. Various minor repairs were made.

The hill on which the light stands is being washed rapidly. A survey shows the light to be in danger. Hence orders were given for its removal to a site in the water about 300 feet north of its present location, where it will stand on wooden piles, incased in terra-cotta pipe filled with cement mortar. All of the material has been purchased and part is being loaded on a hired schooner for transportation to the site and commencement of the work.

1901  Horn Island, on east end of Horn Island, Mississippi.This station was removed to a point 253 feet N. ½ W. of its former location and reestablished in about 2 feet of water on 17 foundation piles protected by terra-cotta pipe filled with cement mortar. The two cisterns were placed on foundations of 8 piles under the dwelling. Steps were built leading down to a new wharf, connecting with the old wharf. The platform under the dwelling is fastened to the foundation

1902  Horn Island, in 2 feet of water on the Gulf coast of Mississippi, northerly side of the easterly end of Horn Island, Mississippi.The old oil and store house was removed and rebuilt on pile foundation alongside of the wharf, about 40 feet from dwelling. The oil-room floor was covered with sheet lead. New braces were put on foundation of station and the entire foundation painted.

1906  Hurricane wipes away the eastern end of Horn Island, destroying the lighthouse and killing Keeper Charles Johnson, his wife, and his daughter.

1907  Horn Island, westerly side of Horn Island Pass, entrance to Mississippi Sound, Mississippi.Under the special appropriation of $10,000 made by the act approved on March 4, 1907, for a new lightstation to replace the one destroyed in storm of September 27, 1906, the plans for the new station were prepared, and work will be started at an early date. It is proposed to build the station by hired labor. The site has been selected.

1919  Ollie K. Clayton, assistant keeper, rescued a fisherman whose boat had capsized in the vicinity of Pascagoula River Entrance Light A, Miss. Happened on August 22, 1919.

1920  The act of March 28, 1918, appropriated $100,000 for rebuilding, repairing, and reestablishing aids to navigation and structures connected therewith on the coast of the Gulf of Mexico damaged or destroyed by hurricane. In addition to the work which had been completed, as stated in the annual reports for the fiscal years ended June 30, 1918, and June 30, 1919, there is given below a list of work which has been completed during the present fiscal year and of that in progress. During the fiscal year the following portions of the work have been completed: Horn Island Light Station, Miss.: Placed 423.6 tons rock protection under and around station.

1922  A.E. Steiner, keeper of Horn Island Light Station, Miss., on May 27 rendered assistance to a gasoline launch, No. 221-A, with 12 passengers aboard, which had become disabled in the vicinity of the station.

For a larger map of Horn Island Lighthouse, click the lighthouse in the above map.