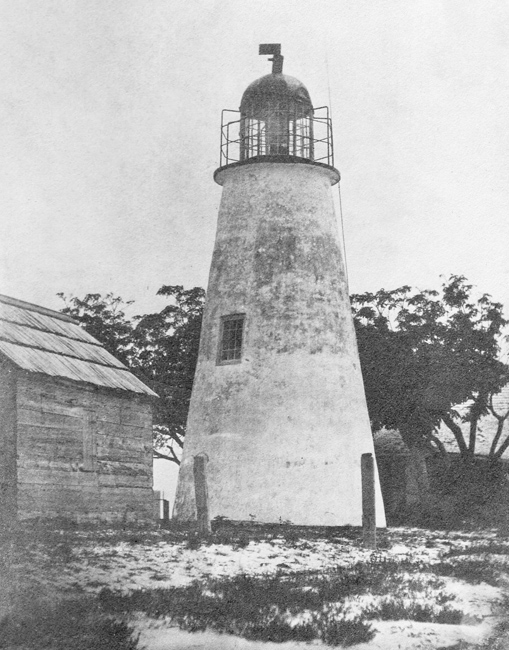 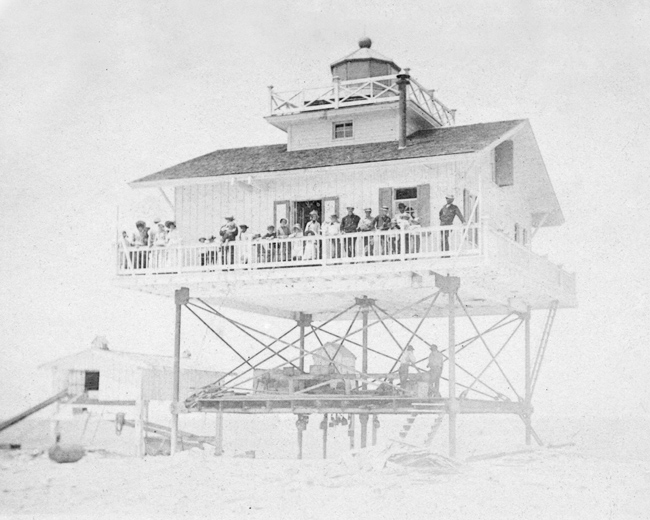 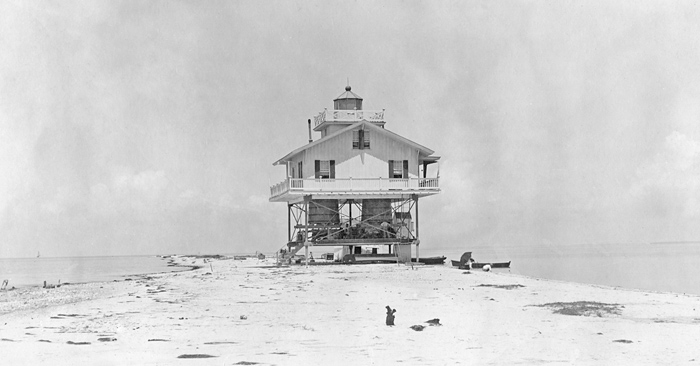 1855  The light-house at the west end of Cat Island, Mississippi, stands on a low and narrow sand spit, which was severely encroached upon by the hurricane of the 15th ultimo, and the keeper's old dwelling was destroyed. Another such storm would probably destroy the tower, and access to it at present from the keeper's new dwelling is likely to be difficult in very high tides, owing to the degradation of the spit between them by the late storm. I have to recommend that the tower be rebuilt in the edge of the wood, near the new dwelling, where the site is higher and comparatively safe. For rebuilding tower at the west end of Cat Island, on a higher site, and providing it with a 4th order lens, $12,000.

1860  Extensive repairs have been put upon the structures at Choctaw point, Cat island, and St. Mark's. In consequence of the serious damage received at the two first named light-houses, so soon after they had been thoroughly repaired, and protected as far as practicable, the board is of opinion that nothing will answer at those points but screw pile light-houses, and it has therefore to recommend that the sum of $20,000 be appropriated for the two.

1862  Steps have been taken to repair damage done to the lights at Ship island, Cat island, St. Joseph's, Pleasanton head, Proctorsville, Rigolets, Bon Tonea, Port Pontchartrain, Bayou St. John, New Canal, Tchefuucti river, and Pass Manchac, and it is hoped and expected that by the 1st of January, 1803, all of these lights will be re-exhibited. The other lights and the buoys in this district will be restored as rapidly as circumstances shall warrant.

1868  Cat island.The buildings at this place were destroyed during the hurricane of 1860. The screw-pile dwelling on the land was burnt at the commencement of the war. The lantern was subsequently taken possession of and applied to Tchefuncti light station.

This light is important as a guide to vessels through the south pass of Cat island, through Pass Marianne, and to the entrance into Cat island harbor, into which 16 feet may be carried at low tide, giving complete shelter in all kinds of weather, especially the dreaded "northers." This light will be re-established so soon as time and opportunity permit.

1869  Cat Island. Mississippi Sound.This station will be rebuilt at the earliest practicable day.

1870  Cat Island, Mississippi Sound, Mississippi.This very useful and important light in navigating Mississippi Sound between Mobile Bay and Lake Pontchartrain was destroyed during the rebellion. Congress made an appropriation for rebuilding it. Bids had been called for, and tenders were being received upon plans and specifications previously prepared to suit the site upon which it had been determined to erect the new iron screw-pile light-house, when the work was arrested by the passage of the act of July 12, 1870, causing the appropriation to revert to the treasury.

1871  Cat Island Light-station, Mississippi Sound.The iron screwpile Light house at this place is nearly completed, and the Light will be exhibited at an early day.

1872  Cat Island, Mississippi Sound, Mississippi.All material for the screw-pile light-house at this station was shipped from the North and delivered to Cat Island July, 1871. Malarial illness prostrated many of the laborers, and seriously retarded the work. The building is of the ordinary form of screw-pile light-houses, square in plan, and supported on five piles. It was lighted for the first time December 15, 1871. The illuminating apparatus is a fifth-order Fresnel lens, showing a fixed white light,varied by flashes, and has its focal plane 45 feet above the mean level of Mississippi Sound.

1880  Cat Island, Mississippi Sound, Mississippi.This station is in good order. The keeper reports a gradual but slow encroachment of the sea against the iron foundation piles.

1882  Cat Island, on the western end of Cat Island, Mississippi Sound, Mississippi.Mineral-oil lamps were fitted. Some erosion is occurring to the shore near the light-house, which is a screw-pile structure; but as the water is so very shallow on all sides, off and near the station, it is not in any present danger. The station is in good order.

1883  Cat Island, on the western end of Cat Island, Mississippi Sound, Mississippi. A wooden plat form 28 feet square was built on the top of the foundation series. The station was painted throughout, and is in good order.

1887  Cat Island, on the western point of Cat Island, Mississippi.A survey of the site was made, also tracings of the reservation and buildings.

1894  Cat Island, western end of Cat Island, Mississippi.This station, which was damaged by the storm of October 1,1893, was put in repair.

1899  Cat Island, western end of Cat Island, Mississippi.The iron foundation work was scaled, scraped, and painted three coats. A boat davit was put up on the gallery, and brace was put under the gallery, with stanchions to keep the boat from swinging under the gallery when it is being hoisted. The bell was swung from a new frame. A weight box was installed to receive the weights when the machine is running and to give them a longer drop, thus increasing the running time of the machinery. A complete set of striking machinery was installed. Various repairs were made.

1900  Cat Island, Mississippi.The keeper's dwelling and the wharf were repaired. The entire station was painted. Contract was let for rock ballast for filling under and around this station. The rock is to be so placed as to be 4 feet high all around under the dwelling and slope gradually from the foundation piles out. Some 215 tons were placed.

1901  Cat Island, MississippiThe work of placing ballast rock around the foundation of this light, which was started in the last fiscal year, was completed. Some 455 tons of rock were placed. It is piled 5 feet high under the structure around the foundation, which gradually slopes out.

1902  Cat Island, at the westerly end of Cat Island, southerly side of the westerly part of Mississippi Sound, Mississippi.The rock around the foundation was repiled. A wharf 150 feet long was rebuilt. Steps from wharf to gallery and hand rail on each side were built and painted. Various repairs were made.

1905  Cat Island, westerly end of Cat Island, southerly side of Mississippi Sound, Mississippi.Two new piles were driven under the foundation of the boathouse. Various repairs were made.

1922  Charles Bateman, keeper, Cat Island Light Station, Miss., assisted in floating a yacht whose engines had become disabled and which had grounded on a shoal in the vicinity of the light station. Happened in Feb.

1930  Cat Island Light Station, Miss., an unwatched automatic acetylene light consisting of a flasher installed in a fifth-order lens, was struck by lightning on the night of August 19. The aluminum washers in the gas pipe connections were burned out, permitting all of the acetylene gas to escape. The length of the gas pipe from the focal plane to the acetylene gas tanks is 31 feet. The floor in the watch room was splintered a little near the center column, but no other damage was done. The sun valve, flasher, and lightning rod were undamaged.

For a larger map of Cat Island Lighthouse, click the lighthouse in the above map.