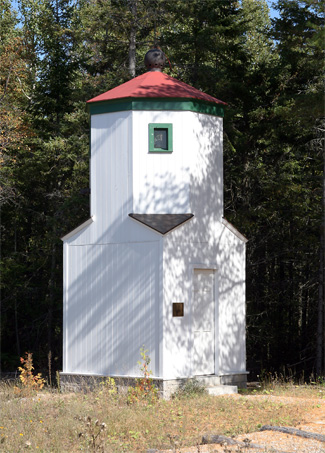 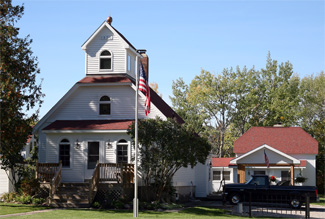 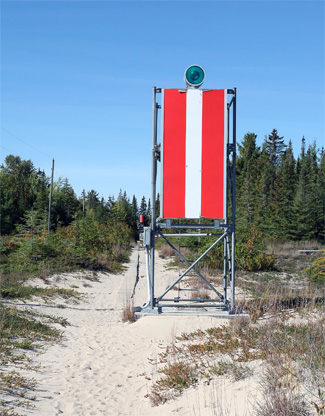 Presque Isle Lighthouse was established in 1840 to serve both as a coastal light and as a harbor light, but when its keepers dwelling needed to be rebuilt in 1868, the Lighthouse Board decided that it would be better to use the allocated funds toward building separate lights to better perform these functions. On March 3, 1869, Congress appropriated $7,500 for range lights to mark the channel into Presque Isle Harbor and followed this up with $28,000 on July 15, 1870 for a lake coast light-house at Presque Isle. Plans for the range lights were drawn up in 1869, and an eight-and-a-half-acre site for the two towers was acquired on June first of that year from Frederick Burnham for $100. Construction of the two lights wrapped up in August 1870, and Isaac Coddington, a Civil War veteran, was appointed their first keeper on September 8, 1870 at an annual salary of $540.

Separated by 1,000 feet, the range lights were located on the western shore of Presque Isle Harbor. Mariners were instructed that when approaching the harbor they should bring the two lights in range, one above the other, and continue on that line to safe anchorage. Aligning ones vessel with a pair of range lights is akin to aligning the sites of a gun on a target.

The front light was displayed from a twenty-one-foot-tall wooden tower that was painted white and stood near the shore. The bottom half of the tower is square, but the corners of the upper half are beveled to create an octagon. A lens lantern originally displayed a fixed white light through a seaward facing window, just below the towers roofline.

The rear light shone from a tower mounted atop the pitched roof of a one-and-a-half-story, five-room keepers dwelling and had a focal plane of thirty-six feet above the harbor, twice that of the front light. The range lights were similar in form to those deployed at Copper Harbor and Eagle Harbor on Michigans Keweenaw Peninsula, and at Baileys Harbor in Wisconsin.

Keeper Isaac Codington served until his death in 1875, whereupon Captain William Sims was placed in charge of the lights. Born in Ireland in 1835, Sims immigrated to the United States while young and later sailed on the Great Lakes, eventually becoming a captain. Legend has it that Sims wife Adeline overhead the proceedings of a Masonic meeting held at the lighthouse, and to keep her quiet, she was made a Mason. Adeline passed away in 1881 and was buried along the range line. Her gravestone, marked with the masonic square and compass, is adjacent to Presque Isle Range Light Park, where the restored front range tower now stands. It is claimed that Adeline is the only female Mason ever, but this is quickly disproved by a little research.

In 1903, a frame barn was added to the station, and new walks were laid between the dwelling, barn, and well. A brick oil house, capable of storing 350 gallons, was built in 1905.

On September 20, 1926, the characteristic of the front light was changed to a white flash every second, while the rear light, which remained fixed white, was mounted atop a black, pyramidal, skeletal tower at a height of thirty-three feet above the ground. In 1940, the lights were electrified and changed to fixed green, the characteristic they have today.

After having served as assistant keeper at new Presque Island Lighthouse under his father, Thomas Garrity was appointed the third head keeper of Presque Isle Harbor Range Lights in 1887. After four years, Thomas swapped assignments with his father, and Patrick Garrity, Sr. became keeper of the harbor range lights in 1891 at the age of seventy-two. Anna took charge of the lights after her father passed away in March 1903 and had her mother remain with her at the station. Anna, who never married, cared for the lights until 1927.

The front range light was replaced by a modern tower in 1967 and subsequently relocated to the beginning of the road that leads to the old Presque Isle Lighthouse. Presque Isle Township acquired the front tower in 1995 using private donations and state funds. The wooden tower was later moved to Presque Isle Harbor Range Light Park, situated alongside East Grand Lake Road and not far from the current front range light. The park includes picnic tables, restroom facilities, a sandy beach, and a swimming area. The Robert Burseky family restored the front tower in 2004.

Around 1945, Marshall and Marjorie Spencer purchased Presque Isle Harbor Rear Range Lighthouse from Gene and Ruth Cleland, good friends and former classmates at the University of Michigan, who had operated the lighthouse as a tearoom called Old Range Light Inn. The Spencers used the lighthouse as a summer home for a few years before deciding to live there year-round.

In 1964, a mallard duck, which the family named Charlie, took up residence in a pond behind the lighthouse. Charlie became somewhat of a tourist attraction after he started chasing the Spencers Cocker Spaniel, nipping at his ears and often jumping on his back for a ride around the yard. The lighthouse remained in the Spencer family until it was sold sometime after 1995.

For a larger map of Presque Isle Range Lighthouse, click the lighthouse in the above map.

From Rogers City, travel south on Highway 23 14.5 miles to County Highway 638. Follow Highway 638 until it ends and turn left onto Grand Lake Road. The range lights are located alongside Grand Lake Road before Presque Isle Marina.