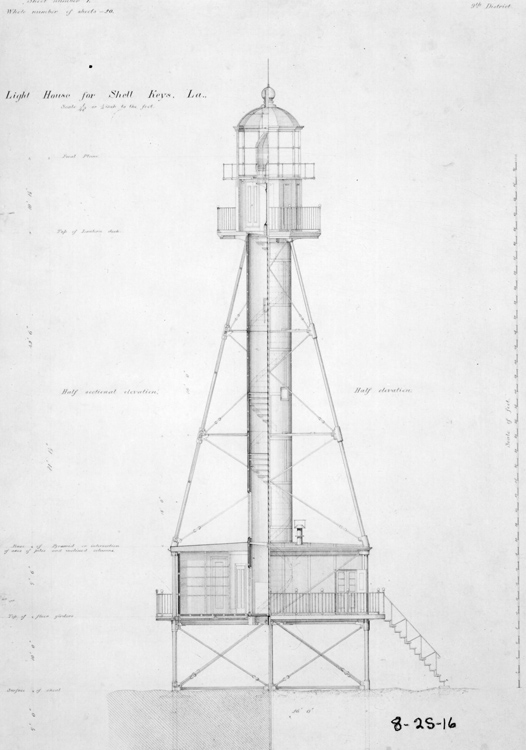 1856  The sites for the Ship Shoal and Shell Keys light-houses have been examined, and the necessary steps taken for commencing the works at the earliest practicable day.

1857  No titles have been obtained to the sites of the small lights authorized at Saluria, Corpus Christi, and at the mouth of the Rio Grande. Steps will be taken as speedily as possible for the erection of the lights authorized on Shell keys and in Atchafalaya bay, on southwest reef, to serve as a substitute for the Point de Fer light-house, and for the Atchafalaya light-vessel.

1858  Shell Keys light-house will be completed during the coming winter.

1859  Information has been received at this office from Lieut. W. H. Stevens, U. S. A., Engineer of the Ninth Lighthouse District, that the new screw pile lighthouse recently constructed by him on Shell Keys, Louisiana, will be ready for lighting on the 1st of June next; notice is therefore given that this light will be regularly exhibited on and after that day. The light is a fixed white light, and the illuminating apparatus is of the third order of the system of Fresnel. The building is on screw piles, on the extreme southern end of the Keys; 81 feet 1 ½ inch high; focal plane is seventy-one feet 1 ½ inch above sea level; keeper's dwelling nine feet six inches high. The whole presents the appearance of the frustum of a skeleton pyramid, with a cylinder in its axis. Latitude (approx.) 29° 20' N.; Longitude (approx.) 91° 49' west from Greenwich. Point de Fer light bears E., distant 24 miles. Entrance to Atchafalaya Bay E. by N. a little northerly, distance 18 miles. Lighthouse on Ship Shoals bears about E. S. E., distant 53 miles.

1859  The iron screw-pile light-houses at Shell keys and Southwest reef have been completed, and were lightedthe former on June 1st, and the latter on 1st of September last.

1865 -The following stations have been repaired and refitted during the year, and are now in operation: Ship shoal, Shell keys, Southwest reef, St. Joseph's, Round island, (Miss.,) Sand island, Bolivar Point and Padre island; and others are in course of refitting, and it is expected that in a few months most of those unlighted will be in full course of useful operation.

1867 -Shell Keys.This iron screw-pile light-house was thoroughly repaired and painted during January and February last. The hurricane just referred to seemed to be most furious at this point, and the light-house was totally destroyed by it. There are now about four feet of water where it stood. There was but one keeper in the light-house at the time, and he undoubtedly perished, so that no particulars concerning its destruction can be given. An estimate of the probable cost of replacing the light-house is submitted.

1868  Shell Keys.This structure was entirely destroyed in the hurricane of 1867, and has not been rebuiltthe appropriation asked for at the last session of Congress not having been granted. The absence of this light is very much felt by vessels trading between Berwick's bay and the Texas coast, and its early reconstruction is strongly recommended.

1869 - For a new lighthouse at Shell Keys, to replace the one destroyed in the hurricane of the fifth and sixth of October, eighteen hundred and sixty-seven, sixty thousand dollars.

1869  Shell Keys, Louisiana.This structure, which was completely destroyed by the tornado of October, 1867, will be rebuilt, at the earliest practicable day, out of the appropriation already made.

For a larger map of Shell Keys Lighthouse, click the lighthouse in the above map.