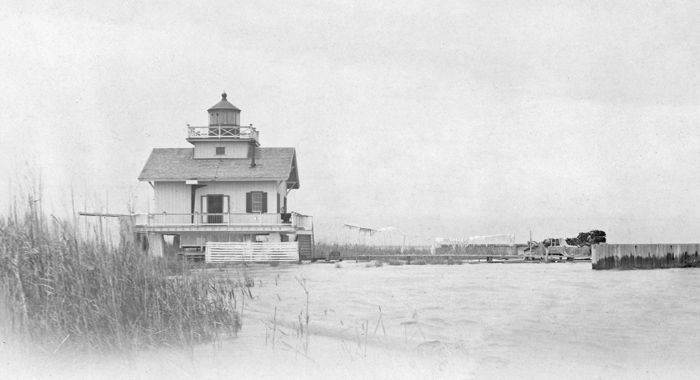 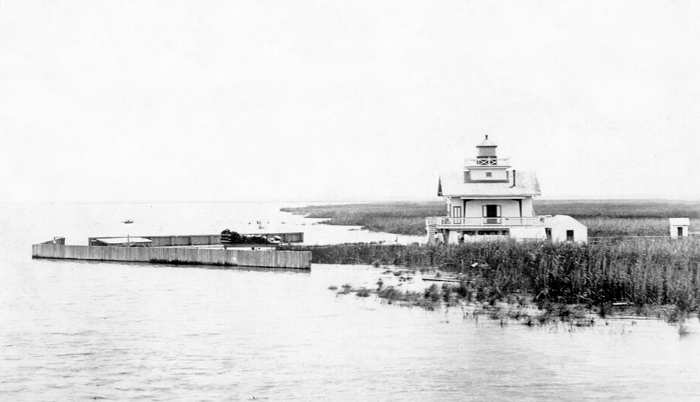 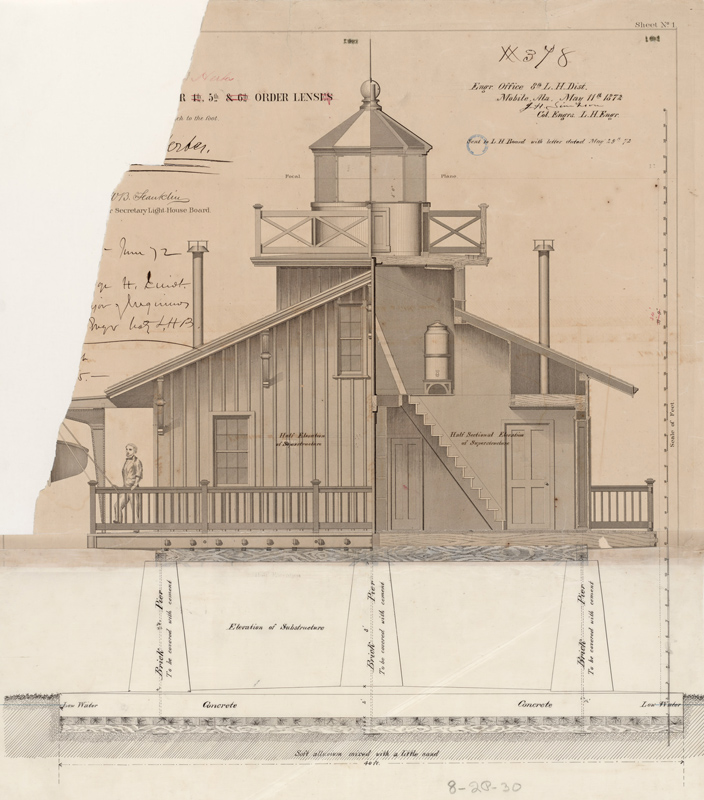 1870  Pointe aux Herbes, Louisiana.The appropriation for a light-house at this place having reverted to the treasury under the operation of the act of July 12,1870, steps towards purchasing the site and perfecting the title were arrested. The owner of the land had agreed to sell the necessary quantity of land at $10 per acre, but until a reappropriation is available no engagement can be entered into with the owner tor it.

1872  Point aux Heroes, Lake Pontchartrain, Louisiana.A fifth-order light has been authorized, but the site for the purpose has not yet been secured. Plans and estimates have been prepared, preparatory to commencing work as soon as the purchase of the site shall have been effected. The light-house will be a wooden building 28 feet square, surmounted by a lantern, with lens of fifth order, and in design, the same with all screw-pile lighthouses built in this district. The substructure, however, instead of being of iron, will be five brick pyramidal piers, 4 feet square at the base, and a little over 8 feet in height, resting on a bed of concrete 18 inches in depth at the center, which will overlay a grillage of two courses of timber, each 6 inches in thickness, the sub-soil of the site being considered too soft and yielding to permit the use of screw-piles. An appropriation of $15,000 is available.

1873  Pointe Aux Herbes, Lake Pontchartrain, Louisiana.The erection of a light-house at this point has not yet been undertaken, the title to the land on which it is proposed to build not having been acquired, though the officers of the Light House Establishment have done all in their power to forward it. The plans are all ready.

1874  Pointe aux Herbes, Lake Ponchartrain, Louisiana.Considerable delay has been experienced in procuring the land necessary for the site of this light-house. This has at last been accomplished. Plans have been prepared, and the work will be undertaken at an early day.

1875  Point aux Herbes, Lake Pontchartrain, Louisiana.Considerable delay was experienced in procuring title to the necessary land for the site of this light-house. This having been accomplished, the work was commenced during the month of February, 1875, and prosecuted until May 15, when it was found necessary to withdraw the working-party because of the non-arrival of the iron-work. After an absence of eleven days, occupied in making repairs at the light-stations in the immediate vicinity, the party returned to the station, and work was resumed. The structure is now nearly completed, and the light will be ready for exhibition on the evening of August 1, 1875.

1876  Point Aux Herbes, Lake Pontchartrain, Louisiana.This structure was completed during the month of July, and the light exhibited for the first time August 1, 1875.

1877  Point Aux Herbes, Lake Pontchartrain, Louisiana.A breakwater of heavy sheet-piling has been constructed at this station during the year, to the northeast and eastward of the light-house, to protect it from the encroachments made by the water of the lake.

1880 - Point aux Herbes, Lake Pontchartrain, Louisiana.This station is in excellent order. A plank walk was laid to the dwelling. There is required here a small wood and wash house in the rear of the residence.

1881 - Pointe aux Herbes, 7 nautical miles WSW. Of West Rigolets, Louisiana.The dwelling was painted throughout. A wash-house and storeroom were built on brick piers in the rear of the dwelling. About 25 feet of new breakwater were built, and the raised walks, leading to the dwelling, were repaired. The place is in good order.

1889  Pointe aux Herbes, Lake Pontchartrain, Louisiana.During the storm of August 19 and 20, 1888, the plank walks were all broken up, the wooden platform, breakwater, and out-buildings were badly damaged and washed away. Some 284 feet of breakwater were rebuilt and 200 feet of plank walk. A new flight of stairs, with hand-rail, was built, leading to the dwelling, and a new wood-rack, 10 by 20 feet by 6 feet high, was put up. The sill to the dwelling was repaired; all doors, window blinds, and windows were overhauled and repaired; two bottom rails in the gallery were repaired; new base boards were put in the kitchen; and all new work about the dwelling was painted. The station is in good order.

1890  Pointe aux Herbes, Lake Pontchartrain, Louisiana.The breakwater was repaired; eleven 12 by 12 inch by 30-foot cypress piles, and twenty 3 by 12 inch by 25-foot sheet-pilings were driven, and the gallery floor was repaired. The buildings are in good condition. During the severe gale of April 21 and 22,1890, the east and northeast wings of the breakwater were badly damaged, 40 feet of the north part of the east wing were washed away, and on the balance of the eastward portion the sheet-piling is partly washed out and the large piles have all washed loose and out of shape. The whole breakwater will have to be renewed, and as this station is in a most exposed position and receives the direct force of certain gales from the lake, there are about 300 feet of the breakwater that should be solidly built. This would be a more expensive breakwater than the present one, but is the least substantial that will stand. There is one of the kind around New Canal light-station that was built in 1885 and it is in good condition now.

1894  Point aux Herbes, Lake Pontchartrain, Louisiana.Two small platforms, with steps, were built, 200 feet of plank walk were laid leading from the dwelling to the outbuildings and breakwater, and various repairs were made.

1898  Pointe aux Herbes, Louisiana.The station was put in thorough repair. Plank walks were built from the breakwater to the dwelling.

1900  Pointe aux Herbes, 7 miles WSW. Of West Rigolets, La. Materials were delivered by a hired vessel. The breakwater was extended and wings were built on the ends. The piling, sheet piles, inside and outside stringers were repaired. The boat and store house, a building 13 feet by 20 feet was rebuilt. It rests on six piles, is sheathed on the outside and the cracks battened, and it has a shingled roof. It is fitted with a window and a door. The foundation of the keeper's dwelling was repaired. The entire outside of the dwelling was whitewashed. Various minor repairs were made.

1901  Point aux Herbes, easterly end of Lake Pontchartrain, Louisiana.Repairs to the wooden breakwater were completed. A wing was built on each end 5 feet high by 30 feet long. Contract was made for placing 1,000 tons of rock, and 306 tons have been put in place. A combination boat and store house was built. A platform was built adjoining the keeper's dwelling. Various repairs were made.

1902  Pointe aux Herbes, easterly end of Lake Pontchartrain, Louisiana. About 1,430 tons of ballast rock was placed in the breakwater.

1917  Repairing and rebuilding aids to navigation, Gulf of Mexico.The act of February 28, 1916, appropriated $200,000 for repairing and rebuilding aids to navigation damaged or destroyed by hurricanes on the Gulf of Mexico. There is given below a list of the work that has been completed and that is in progress, in addition to which there is certain work that has not yet been reached, every effort having been made to restore aids to navigation before less important work was commenced. During the fiscal year the following portions of the work have been completed: Pointe Aux Herbes Light Station, La.: Rebuilding 510 feet of breakwater with cypress piles and sheet piling.

1924  Charles J. Dunn, keeper of Point Aux Herbes Light Staton, La., on April 3, rendered assistance to two men from the schooner Viola Haas, which dragged anchor and ran aground in the vicinity of the light station during a gale.

1928  Much of the stations acreage was sold to New Orleans Pontchartrain Bridge Company.

Point aux Herbes lighthouse was discontinued just after World War II, and vandals burned the superstructure in the 1950s.

For a larger map of Point aux Herbes Lighthouse, click the lighthouse in the above map.