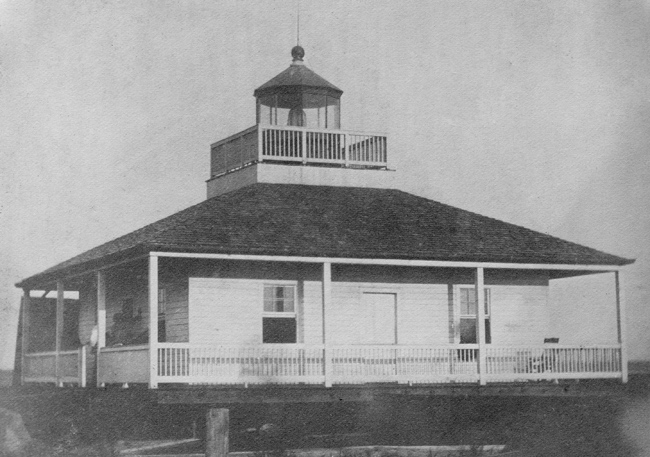 1837  A light-house on Lake Pontchartrain, at the mouth of the Bayou St. John. The several companies interested in the harbors constructed on Lake Pontchartrain, at the canal above New Orleans, at Port Pontchartrain, and at the mouth of the Bayou St. John, having granted the necessary sites, both for light-houses and keepers' houses, the collector has been directed to advertise for proposals for building three light-houses, on piers, adjoining those erected by the several companies, and for building the keepers' houses on the main land. It is expected that they will all be finished by the month of May next. These lights are intended to conduct vessels into the canals and breakwaters near which they are placed, and are to be distinguished from each other by making one a revolving light, another a deep red, and a third a pale red light.

1853  Extract from the report of Captain D. Leadbetter, corps of engineers, light-house inspector, 8th district, dated Mobile, Alabama, November 21, 1853. For the next year I am at present prepared to offer only the following project:
For new light-house at Port Pontchartrain - - - $6,000
Bayou St. John - - - 6,000
New Canal .... 6,000
For beacon-light at Proctorsville .... 3,000
With regard to the new light-houses proposed on the south shore of Lake Pontchartrain and at Proctorsville, it need only be said that those now existing are wholly worthless, and are being repaired at this time, only in the hope of making them serve till new ones can be built.

1854  The frame of tower repaired and strengthened, and the sills, floor, and all the weather-boarding, renewed. The door was re-hung, the copper on the deck repaired, dome and lantern painted, glass reset, and tower whitewashed. The lamps were also repaired.

1855  The new dwellings intended to show a light from their top, in lieu of the present wooden towers at the Bayou St. John and New Canal, have been framed and are ready to be put up.

1856  The erection of the light-house, authorized at the Bayou St. John, Louisiana, is delayed by the works of repairs upon the canal at that point.

1858  The light-house at Bayou St. John has been rebuilt, and the one at New Canal has been thoroughly repaired.

1860  By the gale of the 11th August the light-houses at Bayou St. John and Proctorsville, Louisiana, were entirely destroyed, and the light-houses at Cat island, Round island, Pascagoula, Choctaw point, Rigolets, and Mobile point, sustained considerable damage from that and the storm of the 15th of the same month.

1860 -On the 11th and 12th of September last, a heavy gale occurred on the coast of the Gulf of Mexico, destroying entirely the light-houses at Bayou St. John and Proctorsville, Louisiana, (the keepers of the latter station being drowned,) and doing much damage to the lights at Round island and Cat island, on the coast of Mississippi.

1862  Steps have been taken to repair damage done to the lights at Ship island, Cat island, St. Joseph's, Pleasanton head, Proctorsville, Rigolets, Bon Tonea, Port Pontchartrain, Bayou St. John, New Canal, Tchefuncti river, and Pass Manchac, and it is hoped and expected that by the 1st of January, 1863, all of these lights will be re-exhibited. The other lights and the buoys in this district will be restored as rapidly as circumstances shall warrant.

1863  The light-houses at Port Pontchartrain, Bayou St. John, and New Canal have been refitted and the lights put into operation.

1867  Bayou, St. John.At present there is only a temporary wooden structure at this station. It stands at the extremity of the embankment forming the entrance to the bayou of the same name. The illuminating apparatus consists of a steamer's lens. The screw-pile foundation of the former light-house is still standing, and it is proposed to renew the superstructure, and supply it with a fifth-order lens at an early day, for which purpose an appropriation is now available.

1868  Bayou St. John.The work of erecting the beacon-light upon the old screw-piles of the former structure at this place is actively progressing. The iron work has been made by contract and transported to the site. The structure will be finished in a few days.

1869  Bayou St. John's, Louisiana.The repairs to this old screw-pile foundation, and additions to fit it for the accommodation of a beacon light, were completed last March. This structure sustained no injury by the late gale. The wharf upon which the temporary light has been kept for some time was seriously damaged.

1870  Bayou St. John, iron screw-pile light-home, Louisiana.A new illuminating apparatus was put up, and the light exhibited from it on January 1,1870.

1871  Bayou St. John.The difficulty of exhibiting this Light in bad weather, by reason of the unsuitable form of the structure and the great distance of the keeper's dwelling from it, the hazardous approach to it, over an embankment and rotten wharf of the canal company, which, in heavy weather, are washed by the sea, has been brought to the notice of the Board. The most economical, suitable, and lasting structure would be a screwpile structure, on the plan of those recently ordered for Matagorda Bay. The rise of Lake Pontchartrain, in hurricanes, may be estimated at fully five feet above ordinary high water. On this assumption the floor of the new Light-house should not be less than nine feet above ordinary high water, for the reason that the sea, backed up, first, by the easterly and northeasterly hurricane winds, and then acted upon by the free sweep of the norther, or northwester, over a space of twenty-two miles, will rise in waves of prodigious height, to which severe gales, in ordinary stages of the water, afford no comparison. During the inundation of June last the water rose within a couple of inches of the storm level of 1860, the effect of gales from the east ward, which did not reach the lake itself. But for this fortunate circumstance, the destruction of the Pontchartrain Railway wharf would have been imminent, and the embankments of the new and old canal would have received severe damage. It is deemed of great importance to provide against these extraordinary storms, which, though rare, are nevertheless to be expected from time to time, by establishing structures of such strength and elevation as to render them capable of resisting the force of wind and waves, and giving the requisite security to the inmates.

1876  Bayou Saint John, Lake Pontchartrain, Louisiana.The keeper's dwelling at this station was badly damaged during a gale in the month of March, 1876. As the building was old, the violence of the gale rendered it utterly uninhabitable, and a small wooden building has been erected for the temporary accommodation of the keeper. On the 4th of May the platform and small store-room at the base of the shaft, which supports the lantern of this light, was completely destroyed by fire. A new platform and store-room have been constructed to replace those burned.

1879  Bayou Saint John, Louisiana.The Orleans Navigation Company having cut a new entrance into their canal, opening to the northeast and at some distance from the present light-house, the light is no longer of service as a guide into the canal. The masters of vessels prefer using the new opening on account of greater draught of water and a wider channel-way. It is therefore recommended that the present light be abolished, and the entrance into the canal be marked by two small lights placed in such a manner as to mark the entrance to both openings. The keeper's dwelling was badly damaged by a storm in 1876, and is untenantable. A small temporary dwelling was erected for the accommodation of the keeper, but is not sufficient. An appropriation of $4,000 is recommended.

1880  Bayou Saint John, Lake Pontchartrain, Louisiana.The dwelling is uninhabitable. The small light there marks approximately the entrance to the canal. As this canal charges toll to all vessels using it, it is practically a private affair. If the light is to be maintained, a new dwelling is absolutely necessary. One can be put up for about $2,500.

1882  Bayou Saint John, at east side of mouth of Bayou Saint John, Lake Pontchartrain, Louisiana.The old, dilapidated brick dwelling was uninhabitable, was torn down, and a handsome but inexpensive two-storied frame cottage, raised 4 feet from the ground, with galleries on three, sides, was erected instead, the brick from the old structure being used for the foundation piers and chimney of the new. A new cistern was made, new fences were built, and the platform of the light at the outer end of the canal was rebuilt. The station is now in fine order.

1886  Bayou Saint John, entrance to Bayou Saint John, Louisiana. Material was ordered for rebuilding the foundation of this light, building a walk from the light to the bank of the bayou, and for repairs of the outbuildings about the dwelling. The work will be commenced early in July.

1887  Bayou St. John, 5 miles north of New Orleans, on the west jetty 150 feet from the entrance to Bayou St. John, Louisiana.A survey of the site was made, also tracings of the reservation and buildings. Four boundary stones were placed to mark the reservation. All the old outbuildings were removed, and a new store-house was built, 15 feet by 20 feet in plan and containing two rooms, one of which is ceiled throughout. The platform between the dwelling and kitchen, the gallery floor to the kitchen, and 80 linear feet of plank walk in the yard from the dwelling to the out-buildings were renewed; the fence was repaired; the new store-house was painted inside and outside; the fence and outbuildings were whitewashed; an elevated walk, 980 feet long and 3 feet wide, connecting the revetment of the canal with the light-house was built; the platform of the light, 30 feet by 32 feet, was rebuilt; the watch-room was repaired, and all new work was painted.

1890  Bayou St. John, 5 miles north of New Orleans, Lake Pontchartrain, Louisiana.A new cypress cistern, measuring 8 by 10 feet, was put up on a brick foundation; 306 feet of picket fence were rebuilt; all new work was painted and various other repairs were made.

1896  Bayou St. John, Louisiana.Material was delivered and extensive repairs were made to the dwelling, kitchen, tower, walks, and other buildings.

1897  Bayou St. John, Lake Pontchartrain, entrance to Bayou St. John, Louisiana.Some 60 feet of new decking was laid. The wharf was made 2 feet wider on the east end of the house. A fence 7 feet high with a gate in the center was erected across the plank walk at the entrance to the house. The entire structure, 1,700 feet long, was repaired. Two burners were furnished for the illuminating apparatus. Various thorough repairs were made.

1901  Bayou St. John, at entrance to Bayou St. John from Lake Pontchartrain, Louisiana.A new cistern was erected and connections made to the gutters and with the house. The iron beacon was thoroughly overhauled and repaired and the entire structure scaled and painted. A second-order oil house was built. A plank walk was laid from the oil house to the main walk. Various repairs were made.

1904  Bayou St. John, southerly side of Lake Pontchartrain, Louisiana.On July 1, 1903, the intensity of this light was increased by changing it from a sixth-order to a lens-lantern light. Various repairs were made.

1920  The act of March 28, 1918, appropriated $100,000 for rebuilding, repairing, and reestablishing aids to navigation and structures connected therewith on the coast of the Gulf of Mexico damaged or destroyed by hurricane. In addition to the work which had been completed, as stated in the annual reports for the fiscal years ended June 30, 1918, and June 30, 1919, there is given below a list of work which has been completed during the present fiscal year and of that in progress. During the fiscal year the following portions of the work have been completed: Bayou St. John Light Station, La.: Renewed gutters; repaired roof of dwelling and painted station.

For a larger map of Bayou St. John Lighthouse, click the lighthouse in the above map.