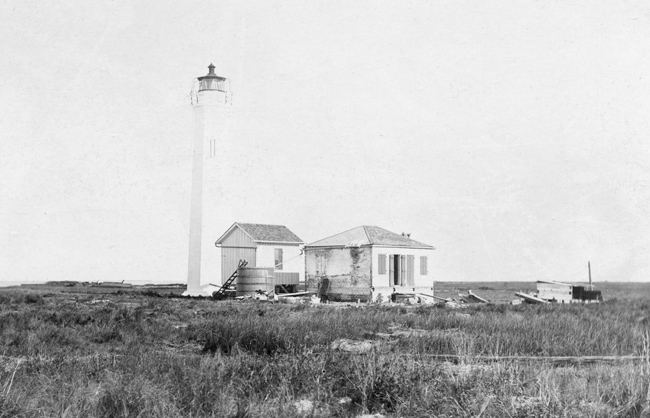 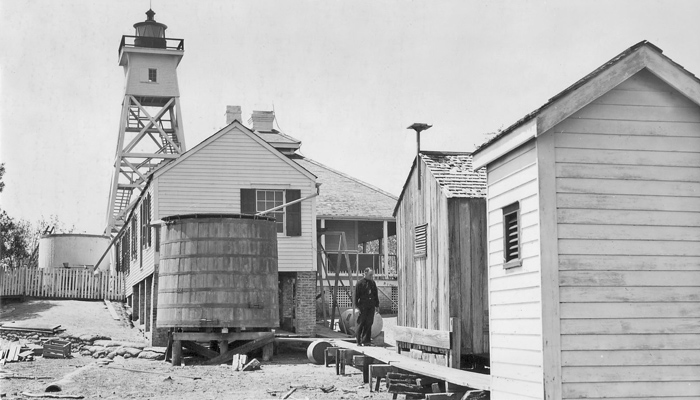 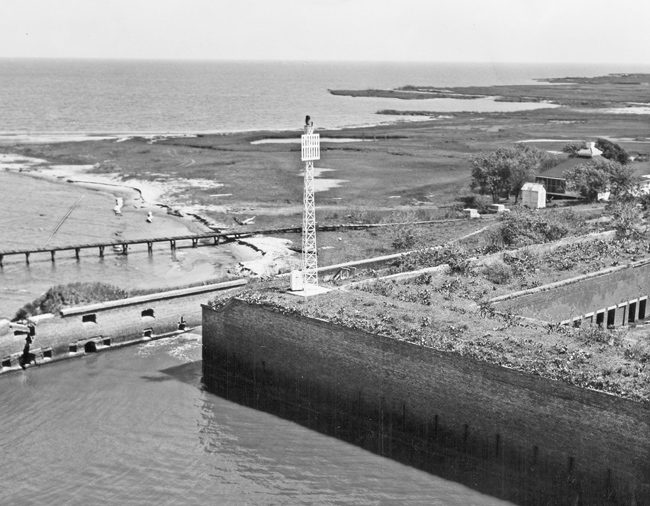 1856  The light-houses at the mouth of Sabine river and at Barataria bay, and the beacon on the bar at Galveston, are in progress.

1857  The light-houses authorized to be built at the entrances to Barrataria and Timballier bays, and at the Sabine Pass, have been completed and the lights exhibited.

A fixed white light of the fourth order catadioptric of the system of Fresnel, has been exhibited from the octagonal tower recently erected inside of Fort Livingston, on the Isle Grand Terre, at the east side of the entrance to Barrataria Bay, Louisiana. The tower is built of brick, 55 feet high, and white-washed. The focal plane of the light is 60 feet above the mean level of the sea, and the light should be visible, in ordinary states of the atmosphere, 13 nautical miles from the deck of a vessel 15 feet above the water. Approximate positionLat. 29° 16' 44" North. Loo. 89° 54' 30" West of Greenwich.

1859  Congress at its last session having empowered the department, upon the recommendation of the Light-house Board, to discontinue from time to time such lights as may become useless by reason of mutations of commerce and changes of channels of harbors, and other causes, the following lights have been dispensed with, viz: Barrataria, Bay, Louisiana.

1864  The re-establishment of the light at Barrataria (discontinued in 1859) having become a measure of considerable importance to the army and navy, by reason of the occupation of Fort Livingstone, and the consequent frequent intercourse between that point and other stations on the coast, was authorized. This light is, moreover, a convenient point of departure for the numerous transports, &c., going westward by the inside passage at Ship shoal.

1867  Barataria bay.The general condition of this station is good. A few slight repairs to the lantern and keeper's dwelling are required.

1869  Barrataria Bay, Louisiana.This station is in good condition. <>1874  Barrataria Bay, Louisiana.This station not having been repaired for some years, the dwelling-house was in a dilapidated condition. The entire roof of the dwelling-house was renewed, a new kitchen was built, and the station put in order.

1875  Barrataria Bay, Louisiana.A petition has been received from the owners and masters of the various vessels frequenting the waters of this bay, asking that the light at this station, which at present only illuminates 270 degrees, be so changed as to light the entire horizon. This change will be made to take effect on July 31,1875.

1876 - Arc of visibility increased so that the light can be seen from around the entire horizon. Date of alteration: July 31, 1875.

1887  Barataria Bay, Grande Terre Island, entrance to Barataria Bay, Louisiana.The kitchen was rebuilt; a new fence was constructed around the dwelling and tower; the walk from the dwelling to the tower was renewed; a new boat-house, 12 feet by 20 feet in plan, with 55 running feet of boat ways, was built, and the outbuildings were renewed; all new work was painted or whitewashed; the grounds were cleared up and various repairs were made.

1888  Barataria Bay, entrance to Barataria Bay, Louisiana.A survey of the site and tracings of the reservation and buildings and some slight repairs were made. A new boat was supplied to replace one worn out.

1890  Barataria Bay, Gulf of Mexico, Louisiana.A severe hail-storm broke many lights of window-glass and did other slight damages, all of which were repaired.

1891  Barataria Bay, on Grande Terre Island, at the entrance to Barataria Bay, Louisiana. The structures were thoroughly overhauled and put in good order.

1894  Barataria Bay, entrance to Barataria Bay, Louisiana.The keeper's dwelling, outbuildings, and cisterns were thoroughly overhauled and repaired; 360 feet of iron fence was placed around the dwelling; 425 feet of 5-foot wharf, and 570 feet of plank walk were constructed, and repairs were made to the boathouse, oil house, and minor repairs to the tower. This station was almost completely wrecked in the storm of October 1, 1893, and the repairs and extensions were difficult to make, as it is in an out-of-the-way place. It is proposed to move the tower to the cover face of the fort as soon as it can be conveniently done, as the land in the vicinity of the tower is being very rapidly washed away.

1895 - 856. Barataria Bay, Gulf of Mexico, Louisiana.Minor repairs were made to the illuminating apparatus.

1897 -953. Barataria Bay, Gulf of Mexico, Louisiana.The erection of a new frame light tower on the cover face of Fort Livingstone was begun. It consisted of the removal and reconstruction of the old tower. Contract was made and the work was begun on January 6, 1897, and completed in the early part of March. The lantern was lit in the new tower on March 13, 1897, for the first time. The new tower is a square pyramidal frame tower, painted white, with the focal plane 76 ½ feet above mean high water. The light is visible 14 ½ miles. The light is fixed white, of the fourth order.

1898  Barataria Bay, entrance to Barataria Bay, Louisiana.A wharf was built 450 feet long by 7 feet wide, of cypress, resting on 3-inch galvanized iron pipe piles and 7-inch flanges, extending from the lighthouse to deep water in the bayou. A boathouse was built at the end of the wharf, with steps leading to the water. Boat davits and five mooring cleats were put in boathouse. A slip was built for hauling out the boat, and a boat winch was put up. Various repairs were made.

1901  Barataria Bay, easterly side of entrance to Barataria Bay, Louisiana.A cistern was erected. A new picket fence, with three gates in it, was put up, filling was wheeled in, and a space 116 feet by 386 feet filled to a depth of about 18 inches, after which it was sodded. Some 200 feet of plank walks were built. New boat ways were built. Various repairs were made.

1920  The act of March 28, 1918, appropriated $100,000 for rebuilding, repairing, and reestablishing aids to navigation and structures connected therewith on the coast of the Gulf of Mexico damaged or destroyed by hurricane. In addition to the work which had been completed, as stated in the annual reports for the fiscal years ended June 30, 1918, and June 30, 1919, there is given below a list of work which has been completed during the present fiscal year and of that in progress. During the fiscal year the following portions of the work have been completed: Barataria Bay Light, Station, La.: Renewed sills under dwelling, screens, and repaired windows, doors, and blinds; painted station.

1931 - A storm which struck the Louisiana coast on July 14 and 15 did considerable damage at several light stations.

At Barataria Bay Lighthouse rock which was placed last year was washed away to some extent, and there was further caving in of the earth fill on which the tower rests.

Formerly located at Fort Livingston on the southwesterly end of Grade Terre Island, marking the eastern side of the entrance to Barataria Bay.
Latitude: 29.273162, Longitude: -89.945688

For a larger map of Barataria Bay Lighthouse, click the lighthouse in the above map.