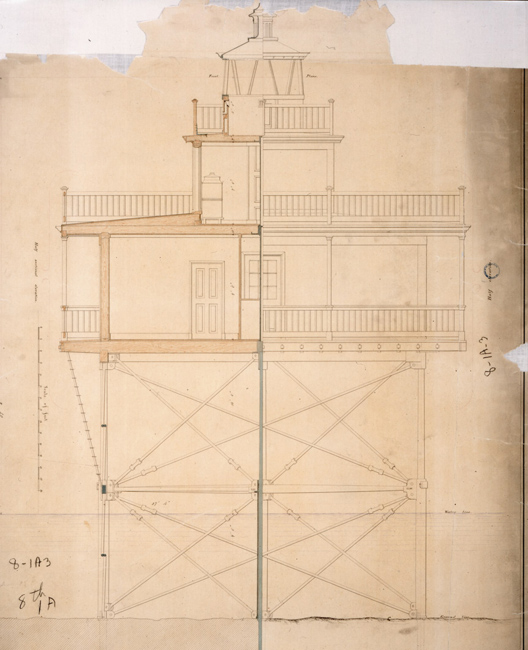 Swash Lighthouse in Matagorda Bay was a white screwpile lighthouse

1855  I would, however, recommend a beacon light at or near the head of the "Swash," abreast of "Alligator Head," in Matagorda Bay. This is recommended by Lieutenant DeHaven, United States Coast Survey, to take the place of a proposed light on or near "Gallinipper Bar," which has been deemed unnecessary; in which opinion I am sustained by Lieutenant De H. For this beacon there should be appropriated $10,000

1857 -The materials for the light-houses at Ship shoal, Swash opposite Alligator Head, and at Half Moon reef, have been prepared, and these structures will, it is expected, be completed during the coming winter months.

1858 -Half Moon Reef, Alligator Head, and Saluria light-houses have all been completed and lighted.

1868  Swash.Of the former structure only the screw-piles of iron remain, and which will answer for a new superstructure, an estimate of the cost of which will be submitted.

1869 - 361. Swash, Matagorda Bay, Texas.There is an available appropriation for the re-establishment of this light, but as it is an interior navigation light, the necessity for its being relighted is not so great as to justify the neglect of other works at this time.

1870 - 353. Swash, Matagorda Bay, Texas.This is one of the light-houses which was destroyed during the rebellion, and for which an appropriation was made for rebuilding it, but before the work could be done the passing of the act of July 12, 1870, carried the money back to the treasury. An estimate of $15,000 has been submitted for its reconstruction upon the old site.

1871 - 383. Swash.The screw-pile Light-house for this point is under construction at the North.

For a larger map of Swash Lighthouse, click the lighthouse in the above map.