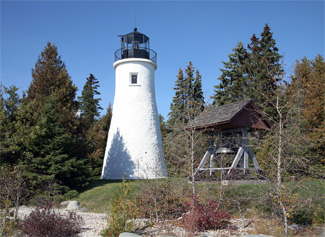 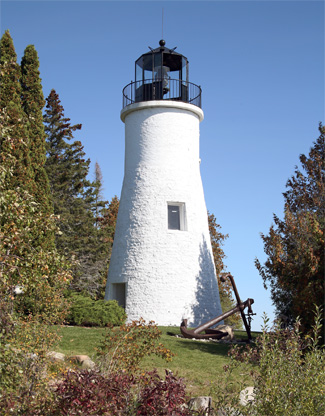 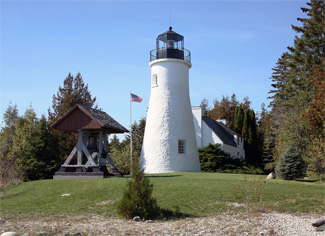 The name Presque Isle, French for almost an island, has been applied to a few Great Lakes peninsulas that are linked to the mainland by a narrow neck of land. Situated nineteen miles north of Alpena, Lake Hurons Presque Isle helps form Presque Isle Harbor to the south and North Bay to the north.

In 1837, the Board of Navy Commissioners appointed Lieutenant G.J. Pendergrast to select lighthouse sites that would yield a systematic arrangement of lights throughout the Great Lakes. After inspecting Presque Isle Harbor that year, Pendergrast reported:

This is an excellent harbor, and ought to be provided with a light, to show vessels how to enter it in a stormy night. All the steam boats bound up or down the lake stop here for wood. The light, if erected, ought to be a colored one.

On July 7, 1838, Congress appropriated $5,000 for a lighthouse at Presque Isle. That same summer, Lieutenant James T. Homans selected a point of land on the northeast side of the entrance to Presque Isle Harbor as the site for the lighthouse and indicated the spot by driving a stake and marking nearby trees. Homans noted that the harbor, being the only safe haven on the route between Fort Gratiot and the Straits of Michilimackinac, a distance of 240 miles, was frequented for shelter during storms by all classes of vessels on Lake Huron.

Jeremiah Moors, who erected Thunder Bay Island Lighthouse in 1832, was awarded the contract for Presque Isle Lighthouse on August 26, 1839. Built to guide vessels into the harbor and also serve those passing up and down Lake Huron, the lighthouse has walls of brick and stone that taper from a thickness of three-feet, two inches at the ground, where the diameter of the tower is twelve feet, to one feet, four inches, at the lantern room, where the diameter is six feet. The tower stands thirty-one feet tall and has stone stairs that lead up to the lantern room where a revolving array of eleven lamps set in fourteen-inch reflectors originally produced a flashing light.

A one-and-a-half-story, brick dwelling, measuring thirty-five by twenty feet, was built just north of the tower, and on September 23, 1840, Henry Woolsey was appointed the first keeper of Presque Isle Lighthouse at an annual salary of $350. Lemuel Crawford, an interim keeper and owner of the harbors wooding station, had kept the light from August 27, 1840 until Woolsey arrived at the lighthouse.

A fourth-order Fresnel was installed atop the tower in 1857, changing the characteristic of the light to fixed white. In 1867, the Lighthouse Board noted that a new dwelling would be built at Presque Isle, but then the following year, it announced a change of plans.

After due consideration of the subject, it was determined to recommend the removal of this light to a site about one mile north of the present one, so as to make it answer the purposes of a much needed coast light, instead of being a mere harbor light as it now is. Owing to the character of the entrance to the harbor, the light is of little value to guide vessels into it. If the removal of the light is made as contemplated, its power must be increased, which involves the necessity for an additional appropriation, which should also provide for the establishment of range lights to guide into the harbor.

Range lights to better mark the course vessels needed to follow to safely enter the harbor were completed in August 1870, and the new coastal light went into service on the opening of navigation in 1871. No longer needed, the old Presque Isle Lighthouse was discontinued and its lantern room and lens removed for use elsewhere. Patrick Garrity, Sr., the last keeper of the lighthouse, moved his wife and five children just up the road to take charge of the new Presque Isle Lighthouse.

The abandoned lighthouse was retained by the government for nearly three decades before being sold at public auction in 1897 to Edward O. Avery of Alpena. A few years later, Avery sold the property to General Duffield.

In 1911, Bliss Stebbins, a successful milliner from Lansing, began construction on Grand Lake Hotel, situated a few miles south of Presque Isle Harbor on the eastern shore of Grand Lake. Soon after the hotel was opened, Stebbins purchased the old Presque Isle Lighthouse at a tax sale for $70 with plans to use it as a picnic spot for his hotel guests.

By the time Bliss Stebbins sold the lighthouse property to Francis B. Stebbins, his nephew, in 1930, the roof of the dwelling had collapsed from lack of maintenance. Francis Stebbins planned to use the dwelling as a summer cottage, but finding it too deteriorated, he demolished it and built the current residence on its foundation in 1939. After purchasing a larger summer home nearby, Stebbins decided to refurbish the tower in the 1950s and operate the property as a museum. Stebbins acquired a fourth-order Fresnel lens at a Coast Guard auction and then had a replica lantern room fabricated and installed atop the tower in 1961 to house his new lens.

According to a 1960 newspaper article, the lighthouse had become quite a museum, displaying a Civil War cannon, a ships capstan, an anchor from a lumber schooner, a circular saw blade from Beaver Island, the wreck of the barque Fame, and a 3,245-pound bell from the clock tower of Lansings old city hall. A second fourth-order Fresnel lens Stebbins acquired from the Coast Guard was displayed outside the dwelling during the day. After acquiring Beaver Island Lighthouse in 1975, Charlevoix Public Schools inquired if James Stebbins would be willing to sell them one of his lenses. James decided to donate the lens instead, and it was soon relocated to Beaver Island Lighthouse, where it remains today.

After Francis Stebbins died in January 1968, the lighthouse passed to his son James. James Stebbins hired college-aged girls to dress in 1800s-style dresses and give tours of the lighthouse during the summers, before deciding to hire George and Lorraine Parris, a retired couple, to run the place in 1977. George, who was known for his entertaining tours of the lighthouse, passed away in January 1992. The following May, Lorraine was returning to the lighthouse after an enjoyable dinner at her daughters house and thinking it would have been nice if George had been there to share it with them, when she saw a light glowing atop the tower. Lorraine knew what she was seeing was impossible, as the light had been permanently disconnected years before, but yet somehow the light was on.

Lorraine thought she was going crazy when she first started seeing the light, but she soon grew to accept it. I started to feel as if it was just Georges way of keeping the spirit of the lighthouse alive, she said. I used to be afraid of it, but now it gives me a lot of comfort. Lorraine isnt the only person who has seen the mysterious light. Some have attributed the glow to distant lights reflecting off the lantern room glass, and while that may be true, others hold fast to the belief that there are some spirits whose affection for lighthouses doesnt die when their bodies do.

In 1995, James Stebbins sold the lighthouse to Presque Isle Township, which has since operated the site as a museum and gift shop. A major renovation of the lighthouse in 2002 included repairing windows in the lantern room, repainting the tower inside and out, and applying new bonding material to hold the stonework together.

For a larger map of Presque Isle (Old) Lighthouse, click the lighthouse in the above map.

From Rogers City, travel south on Highway 23 14.5 miles to County Highway 638. Follow Highway 638 until it ends and turn left onto Grand Lake Road. The road that leads to Old Presque Isle Lighthouse will be on your right after 0.8 miles and just after you pass Presque Isle Marina.

Old Presque Isle Lighthouse is open from late May through early October. Check out the lighthouses website for visiting hours. The keepers dwelling houses a museum, and visitors are allowed to climb the detached tower, which contains a fourth-order Fresnel lens. For more information, call (989) 595-9917.


A short blurb that appeared in various newspapers in 1947 claims that the old lighthouse was built by Jefferson Davis during a tour of duty in 1838 and that the lighthouse is now a shrine to the president of the Confederacy. There are just a couple problems with the statement. First, the lighthouse was not built in 1838, and second, it wasn't built by Davis.

On June 23, 2012 a life-size sculpture of Keeper Patrick Garrity, crafted by Dawn Barr, was unveiled at the entrance to old Presque Isle Lighthouse as a tribute to all lighthouse keepers.