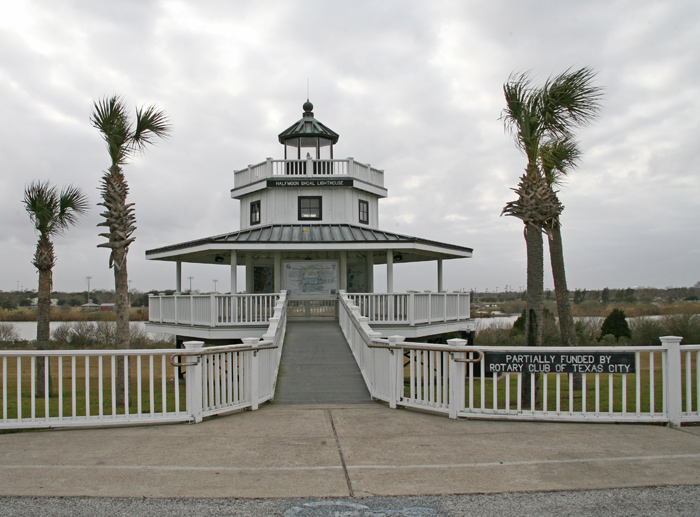 1853  The three lights authorized to be placed in Galveston bay, on Halfmoon shoal, Red fish bar, and Clopper's bar, are under construction by contract, and will, it is hoped, be ready for lighting by the time the illuminating apparatus is received from France, which has already been shipped.

1854  On the 9th February I inspected and received the three screw-pile beacons in Galveston bay; since which time I have been engaged attending to current repairs and expenditures in different portions of the, district.

1868  Half-moon shoal.The exigencies of the service have prevented any steps toward re-establishing this station, beyond ascertaining its condition.

1869  Half Moon Shoal, Galveston Bay, Texas.This station was thoroughly repaired, and the light would have been exhibited in the month of September but for the fact that a steamer ran into it and damaged it seriously. The owners of the steamer have agreed to make good the damage, and the light will be exhibited at an early day.

1881  Half-moon Shoal, in Galveston Bay, between Pelican Island and Dollar Point, Texas.The dwelling was painted and new tin gutters were erected; all the iron-work was coal-tarred; and the gallery floor, rails, and doors were repaired. The station is in good order.

1882  Half-moon Shoal, in Galveston Bay, between Pelican Island and Dollar Point, Texas.A new lens and mineral-oil lamps were fitted, and various repairs were made.

1885  Half-Moon Shoal, Galveston Bay, Texas.A new tin roof was laid, the illuminating apparatus was adjusted, a new floor was laid in the old store-room, and various minor repairs were made.

1892  Half moon Shoal, Galveston Bay, Texas.The lower section of the iron braces was renewed. A new column was put in under the keeper's dwelling. The platform and ladder under the dwelling were repaired. All new work was painted.

1899  HaIf moon Shoal, in the bay between Pelican Island and Dollar Point, Texas.Materials were delivered for repairs.

1900  Half moon Shoal, Galveston Bay, Texas.A platform 20 feet square was built under the dwelling. This platform supports the oil house and two iron water tanks. The fog-bell striking machinery was overhauled and repaired. Various repairs were made.

1900  During a hurricane on September 8, 1900, a freighter broke free from its mooring and was driven into the lighthouse, demolishing the structure and causing the keeper to drown.

1902 -1170. Halfmoon Shoal beacon light. Texas.This beacon was built to replace the old light-station which was carried away in the storm of 1900. It stands in 5 feet of water about 50 feet NNW from the center of the old light. It is a black, square pyramid covered with horizontal slats on iron-cased piles, and bears a white lens-lantern light 40 feet above mean high water.

1904 - Reimbursement of the heirs of Light-Keeper Bowen for losses sustained during the hurricane of September 8, 1900.The following is a copy of a letter dated December 7, 1901, from the Secretary of the Treasury to the Speaker of the House of Representatives:

This Department has the honor to state, at the instance of the Light-House Board, that during the hurricane of September 8, 1900, the light-station at Halfmoon Shoal, Texas, was demolished and that the light-keeper. C. K. Bowen, was drowned.

A claim of $450.50 having been presented by the temporary administrator of the estate of the late keeper at that light-station for the value of the property he had properly at the light-house, the loss of which was occasioned by this storm, the Board, at its session of November 4, 1901, examined into the merits of the claim and decided that the heirs of Mr. Bowen ought to be reimbursed for the losses thus sustained.

Formerly located on Halfmoon Shoal in Galveston Bay, four miles west of the entrnace to the channel between the jetties.
Latitude: 29.401155, Longitude: -94.848884

For a larger map of Halfmoon Shoal Lighthouse, click the lighthouse in the above map.

No light exists on Halfmoon Shoal today. A replica of the lighthouse is located on the Texas City Dike, just west of where the historic lighthouse stood.