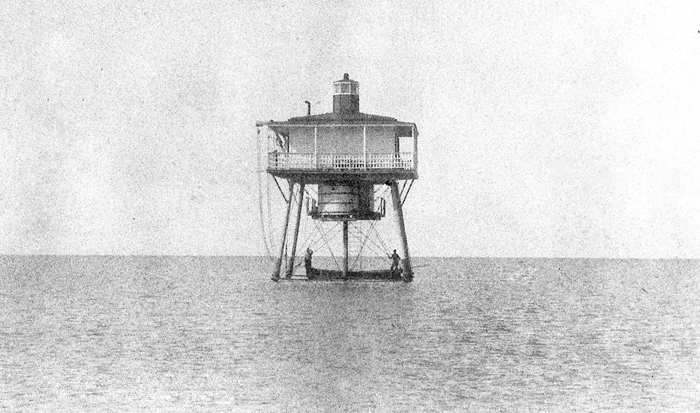 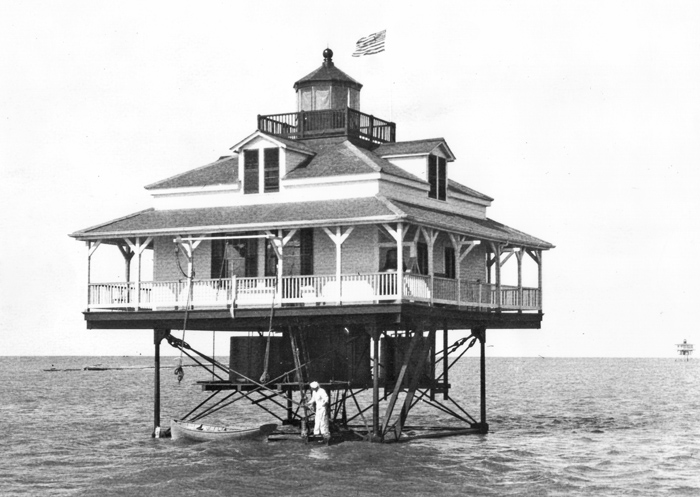 1853  The three lights authorized to be placed in Galveston bay, on Halfmoon shoal, Red fish bar, and Clopper's bar, are under construction by contract, and will, it is hoped, be ready for lighting by the time the illuminating apparatus is received from France, which has already been shipped.

1854  On the 9th February I inspected and received the three screw-pile beacons in Galveston bay; since which time I have been engaged attending to current repairs and expenditures in different portions of the, district.

1868  Red-fish bar.Of this structure the iron screw piles only remained, the rest having been burned during the war. A force was sent there in July last with the necessary materials, and the reconstruction of the lighthouse is progressing rapidly. The lantern is nearly finished and will shortly be sent down. It is expected that the work will be completed in about a month. A temporary light was established May 8, 1868.

1869  Red Fish Bar, Galveston Bay.This station has been thoroughly repaired, and is now in good condition.

1881  Red Fish Bar, Galveston Bay, Texas.The station was renovated and painted, and a roof was built over the gallery. The station is in good order

1885  Red Fish Bar, on Red Fish Bar, off Edward's Point, Galveston Bay, Texas.A new tin roof was laid, the illuminating apparatus was adjusted, and a few general repairs were made.

1888  Red Fish Bar, Galveston Bay, Texas.A new cistern, with a capacity of 2,074 gallons, was put up, also a new cistern pump, and various minor repairs were made.

1892  Red Fish Bar, Galveston Bay, Texas.A gallery was put up around the keeper's dwelling. A new tin roof was put on. Various minor repairs were made.

1895  Red Fish Bar light-station, Texas.This light is almost useless as an aid to navigation in its present location. A light upon the edge of the channel which has been cut through Red Fish Bar would be of much service. The buildings of the station have decayed to such an extent that it is impracticable to remove them and place them elsewhere. It is estimated that to reestablish this light on the edge of the channel, where it would be of great use to vessels going through the cut, would cost, say, $8,000, and it is recommended that an appropriation of this amount be made therefor.

1898  Red Fish Bar, on Red Fish Bar off Edwards Point, Texas.By the act approved July 1,1898, an appropriation of $8,000 was made for reestablishing this station on the edge of Red Fish Bar Cut. This work will be done as soon as practicable.

1899  Red Fish Bar, on Red Fish Bar, off Edwards Point, Texas. Under the appropriation of $8,000 for a new light, provided by the act approved July 1, 1898, an examination was made and samples were obtained of the bottom, depth of water, etc., at the site of the proposed light. Contract was made for altering, repairing, and furnishing metal work for the foundation and lantern of the new structure, and the materials for construction have all been ordered, and they, with the metal work, are awaiting transportation to the site of the work, when the station will be built.

1900  Red Fish Bar, on Red Fish Bar, Galveston Bay, Texas. This old station is partly dismantled, but as it is used by small schooners and vessels, which do not use the dredged cut, a 5-day red lens lantern light was installed, and is now maintained there. This was damaged by fire, and replaced by an 8-day lantern.

For a larger map of Red Fish Bar Lighthouse, click the lighthouse in the above map.

No light exists at this exact location today.