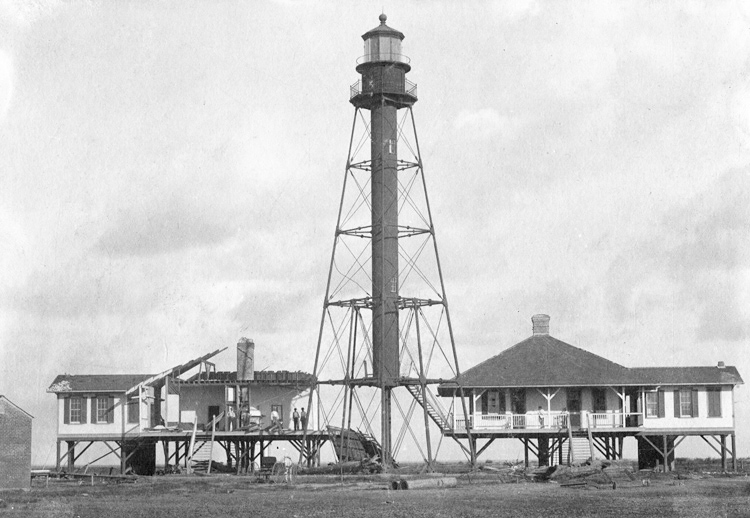 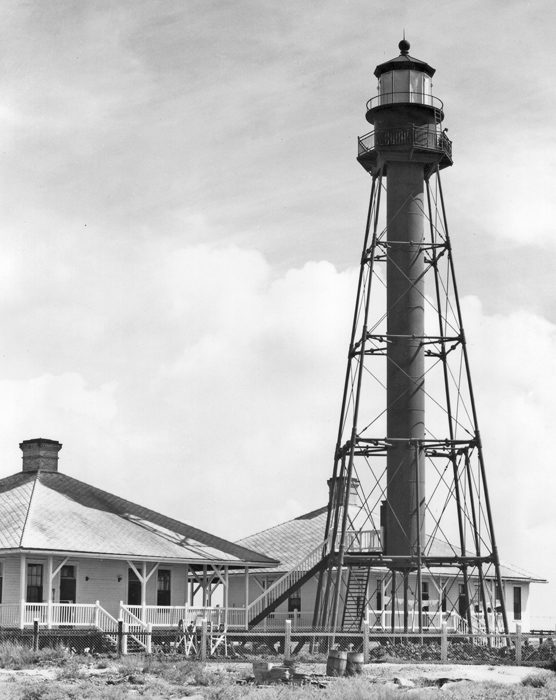 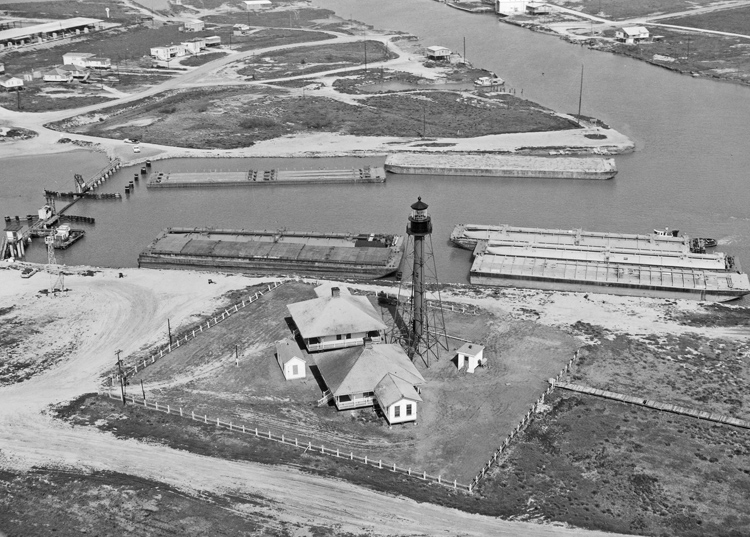 1894  Brazos River, Texas.The site originally selected for this light station was located on the banks of the canal near the mouth of the Brazos River, and borings were made in January, 1894, to determine the character of the foundation soil. It was alleged that the construction of light buildings thereon would conflict with the rights of the company owning the canal. Hence condemnation proceedings, which had been begun, were suspended and the subject of a new location is now under consideration. The plans for the light-station have been prepared. The exact location of the range beacon and fog bell has not been determined, and cannot be until the jetties are sufficiently advanced in construction to enable the beacon and fog signal to be placed near the outer end of the south jetty.

1895  Brazos River, Gulf of Mexico, Texas.The site for this station was acquired by condemnation. Plans were prepared, and proposals for furnishing the metal work and for erection were opened May 1,1895, and contract for the erection was awarded. The price asked for furnishing the metal work was not considered advantageous, so the bids were rejected and the work was readvertised. The new bids were opened on June 12,1895, and the lowest was accepted. The contract will be made at an early date, and the work will be begun and probably finished before the close of the next fiscal year.

1896  Brazos River, Gulf of Mexico, Texas.This tower was completed on May 14,1896, and turned over to a keeper on May 30, 1896. It is a skeleton iron structure, painted a dark mineral-brown color. The lantern and watch room are painted black. The tower is about 2 ½ feet above mean sea level. Its focal plane is 96 feet 7 ¼ inches above base of tower and 99 feet above mean sea level. Its illuminating apparatus is of the third order, and shows all around the horizon. It shows a revolving white light at intervals of 5 seconds, with a flash of less than one-half second. Construction of outbuildings and other incidental work remains to be done to complete the station.

1898  Brazos River Jetty light-station, entrance to Brazos River, Texas.A range beacon was built, consisting of a square platform resting on piles, surmounted by a column from which a lantern is suspended, and equipped with two small houses and a fog bell. The structure is painted black. The fog signal consists of an 1,850-pound bell struck by machinery. The structure stands in about 8 feet of water and the focal plane of the light is 36 1/2 feet above mean high water. It serves as a range with the Brazos River light in approaching the ends of the jetties.

1899  Brazos River jetty light-station, entrance to Brazos River, Texas.Two sections of 24-inch inside diameter cast-iron water pipe were installed to receive the bell weights and lengthen the time the striking machinery will run without rewinding. The hoisting rope broke after the lantern was hoisted in place and the lantern fell and was badly broken. It was replaced by a small lantern at the same height as the former light, with no cessation in the display of the light. A new lantern and steel hoisting rope were installed.

1899  Brazos River, about 1 mile inside its mouth, Texas.Materials were delivered for use in repairs.

1900  Brazos River Jetty light-station, entrance to Brazos River, Texas.A ladder 14 feet long was installed. A plank walk was laid from the beacon to the jetty. A white shelter house was built for the keeper of the fog-signal and range beacon, adjoining the beacon on the west side, and connected with it by a gallery. It consists of two rooms, with a gallery and a cistern. It has a shingle roof, and stands in the river on piles, protected by wooden jackets filled with cement mortar. Various repairs were made.

1900  Brazos River, Texas.The tower was scaled, scraped, and painted. Some 5 cubic yards of filling was placed. Some 350 feet of brick walk 3 feet wide was built. A picket fence was built in front of the station 188 feet long. The wharf was repaired. Various repairs were made to the keeper's dwelling. A brick pavement, 884 feet, was laid. Some 50 feet of sewer pipe was put down from the dwelling to the outside of the fence. The dwelling, inside and out, was painted. Repairs were made to the assistant keeper's dwelling. Various repairs were made.

1901  Brazos River Jetty, entrance to Brazos River, Texas.This station was wrecked by the hurricane of September, 1900, and a temporary light on a post was substituted for it near the location of the former light. A new structure was built by contract, but neither light nor fog-signal has yet been put into operation. It is a one-story frame building, with three rooms on the first and one on the second floor, which will contain the striking machinery of the fog-signal and the lantern. It stands on the jetty on the western side of the entrance to Brazos River, Texas, about 1,500 feet from the north end, and will form a range with Brazos River light-station and the light on the south end of the west jetty. It rests on a pile foundation, and has a gallery and a cistern standing near the southeast corner, to which it is connected with gutters and lead pipe.

1901  Brazos River, Texas.The keeper's dwelling was rebuilt. A, shingle roof was put on the assistant keeper's dwelling. A picket fence, 750 feet long and 4 feet high, was built. Some 40 feet of plank walk was built. Some 560 feet of wharf was built. It is 6 feet wide, rests on iron-pipe piles, and has a pierhead at the outer end 40 feet by 20 feet and an incline at the inner end. The pierhead is protected by 11 fender piles, braced together and to the pierhead. The frame boathouse was rebuilt. Various repairs were made.

1902  Brazos River Jetty, entrance to Brazos River, Texas. A lens lantern light was installed on this structure, and a fog signal installed ready for operation. It consists of an 1,800-pound bell struck by machinery.

1967  The United States Government conveyed the property to the Dow Chemical Company, which dismantled the skeletal tower. The lantern room was salvaged and given to the Brazoria County Museum Association along with the towers Fresnel lens.

1980  The lantern room was placed on display on the grounds of the old courthouse in Angleton.

For a larger map of Brazos River Lighthouse, click the lighthouse in the above map.

No light exists where the lighthouse formerly stood. The lantern room and Fresnel lens from the lighthouse can be seen at Brazoria County Historical Museum.