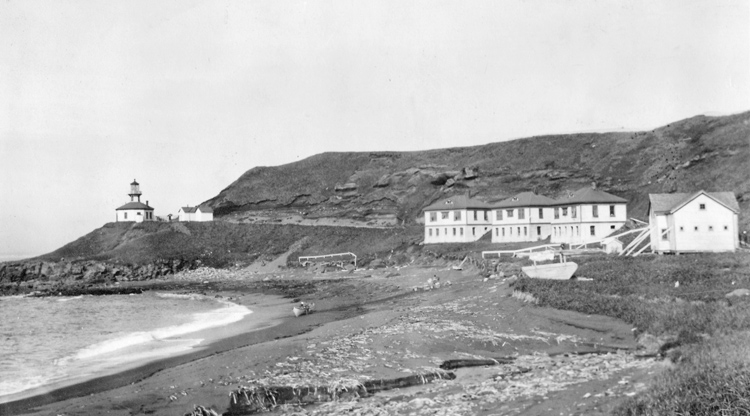 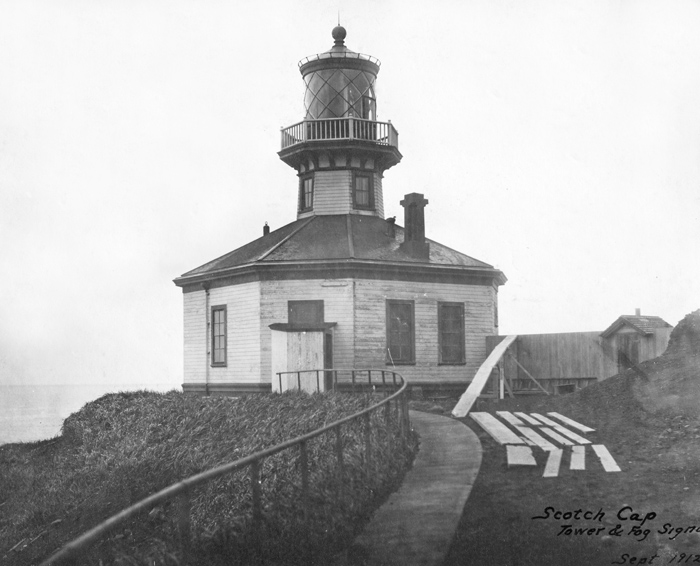 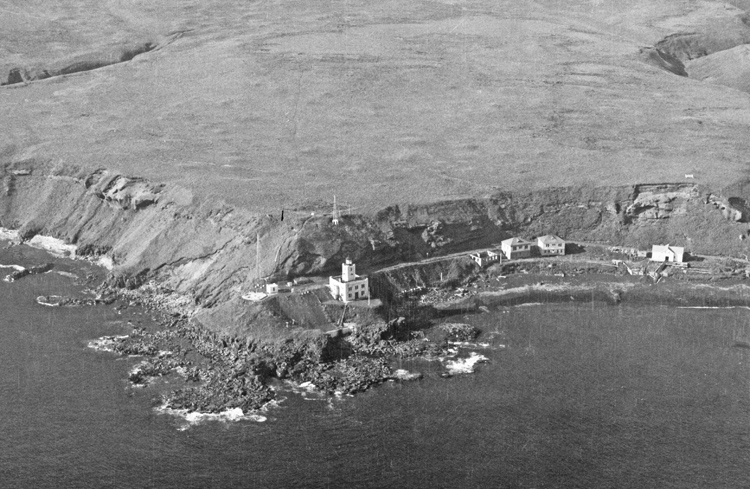 1902  Scotch Cap, East, Alaska.Plans and specifications for construction of the structures were made and proposals were opened on March 22, 1902. All bids received were so excessive that the station was built by hired labor, while material was bought by contract. The greater part of the material has been purchased. The steamer Homer of 665 tons burden, which was chartered on June 23,1902, left Seattle on June 30, 1902, with necessary men and material.

1903  Scotch Cap, Alaska.The steamer Homer, of 665 tons burden, which was chartered on June 23, 1902, and which left Seattle on June 30, 1902, with men and material for constructing the station, arrived at the site July 13, 1902, and discharged the cargo safely. The steamer made two other trips during the season, carrying material for the construction of the station. This work of construction was discontinued for the year on November 27, 1902. The fog-signal and tower were completed, with the exception of laying one of the concrete engine beds, placing hardware and lantern glass, and applying two coats of paint inside and outside. The two oil houses were completed with the exception of the last two coats of paint. The barn was completed with the exception of painting and putting in stalls. The three dwellings were completed on the outside with the exception of painting. Inside work of ceiling was placed and some of finishing work done. The steamer Homer arrived at the station on May 10, 1903, with men and material for completing the station. The painting of the buildings and installation of heating plants were practically completed. The lens was set up and the light put in operation on June 19, 1903. Some work remains to be done on fog-signal machinery, and it is expected that the signal will be ready for use on July 15,1903.

1904  Scotch Cap, Unimak Pass, Aleutian Islands, Alaska.The station was completed on July 17, but it was nearly a month earlier when it was lighted, on June 18, 1903. The fog-signal was ready on July 17, but, upon starting, all three check valves were broken, making the signal useless. New valves were procured, and the signal was made ready for use on September 16, 1903.

1904  Scotch Cap, Alaska.The 10-inch whistle was in operation some 103 hours, and consumed about 401 gallons of oil. No report for June has yet been received from this distant fog-signal.

1906  Scotch Cap, Alaska.In January a snowslide, resulting from a long and heavy snowfall, damaged the middle dwelling and the barn, and carried away the call-bell wires and handrail on the walk to the tower. Repairs are now being made.

1918  Repairs and improvements, light stations, Alaska.For repairs and improvements to existing aids to Alaska, $70,000. Note. - Owing to the increasing volume and importance of the commerce of Alaska, it is very desirable that important improvements be made in certain lights and fog signals, as urged by mariners. At Scotch Cap it is proposed to install a flashing lens in place of present fixed lens, which will increase the power of the light and render it distinctive from other fixed lights. This is an important coast station located on Unimak Pass and is made by all vessels passing from the Pacific Ocean to the Bearing Sea. Shore protection is also needed at this station, as the dwellings are threatened by encroachment of the sea, and new machinery is needed to replace that worn out in service.
Scotch Cap Light Station - Purchase new compressors and engines, install flashing lens in place of fixed lens, construct shore protection. 9,500

Complete radio telephone transmitting and receiving stations were installed at Cape Sarichef and Scotch Cap Light Stations, Alaska, by the Navy Department in 1921. Some minor difficulties were experienced during the first year of operation, due to burnouts of the motor generator and wrecking of one of the steel antenna masts by a storm. Repairs were made in 1922, and since then but little trouble has been experienced. The keepers at both stations have mastered the mechanical and electrical details of the installations sufficiently to keep them in operating order, and radiophone communication between the two stations which are about 17 miles apart, is maintained without any difficulty.

1922  The keeper of Scotch Cap Light Station, Alaska, has written the following letter to the superintendent of lighthouses at Ketchikan, Alaska:
I thought I would write and let you know how things are at the station. We have had some trouble with the phones here, and also at Cape Sarichef: for a while we got not signals from there, and I took a walk over to Cape Sarichef, where we found the trouble to be wrong wire connection. Some time afterwards our transmission got out of order. It took us a week to correct it, and now Cape Sarichef gets our signal O.K. It may interest you to know that I have done some successful broadcasting from here by putting the transmitter inside the sound box of the phonograph, then starting the dynamo. They could hear the music very plainly at Cape Sarichef. 1930  A radiobeacon has just been established at Scotch Cap Light Station, Alaska, which is located in one of the foggiest regions of the world, according to the Lighthouse Service of the Department of Commerce. In spite of its remoteness, Scotch Cap is one of the important lighthouses of the Pacific, for trans-Pacific steamships plying between our northwest coast ports and the Orient sweep northward on an approximate great circle course passing close to the Aleutian Islands; the actual great circle passes through the islands.

Scotch Cap is at the entrance to Unimak Pass, the most westerly point of the Alaskan mainland, beyond which the Aleutian Islands stretch westward toward Asia. This region is one of the foggiest in the world. Because of the prevalence of fog, the radiobeacon just established, greatly increases the efficiency of the light station, and will assist vessels in passing to the southward of, or through Unimak Pass when the light is obscured. Its great range, one or two hundred miles, provides navigators with the means of taking a bearing a number of hours before even the most powerful light could be seen.

This northern route, which is one of the shortest between the two continents, is extensively used. There have been marine disasters in the past on these bleak islands, and the radiobeacon will provide greater safety by giving a definite position in the vicinity of Unimak Pass. It not only benefits trans-Pacific steamers, but those en route to and from north Alaskan ports.

During clear weather the station sends out its signal of two dashes continuously for the first 10 minutes of each half hour. During foggy weather the same signal is send out for 60 seconds, followed by a silent interval of 120 seconds, the schedule being repeated during the continuance of thick weather. This is the first station at which this method of operating a radiobeacon has been adopted, and it has the important advantage of giving to all vessels within a considerable distance information as to the prevalence of clear weather or of fog at the Pass, according as the signal during the first 10-minute intervals is sent continuously or with silent intervals

1940  A new lighthouse, built of concrete and similar in design to Sand Hills Lighthouse in Michigan, replaced the original wooden Scotch Cap Lighthouse.

1946  On April 1, 1946, a 7.4-magnitude earthquake struck the North Pacific, at a location roughly 13,000 feet below the surface of the ocean. The earthquake spawned a tsunami that quickly traveled north to the Aleutian Islands and south, where, five hours later, it would hit Hawaii.

Hoban Sanford, who was stationed at the radio direction-finding station located on the bluff above the lighthouse, left the following account of the earthquake:

At 0130 Xray, 1 April, 1946, at which time I was awake and reading, a severe earthquake was felt. The building (CG Unit 369 - Unimak A/F station) creaked and groaned loudly. Objects were shaken from my locker shelve. Duration of the quake was approximately 30 to 35 seconds. The weather was clear and calm.

Knowing that the volcanoes to Northward of the building had been active at one time, I immediately looked in that direction for signs of renewed activity and upon seeing none, made a round of the building to see what, if any, damage had been caused by the tremor. Inspection failed to reveal any damage other than objects shaken from locker shelves. The crew were all awakened by the quake.

Intending to call Scotch Cap Light Station on the phone to ascertain if they had felt, or been damaged by the quake, I went to the phone in operations but Pitts, RM2c, who was on watch at the Light Station, had said that he was "plenty scared" and was going to call Dutch Harbor Navy Radio to see what information that unit might have regarding the earthquake.

At 0157 Xray a second severe quake was felt. This one was shorter in duration lasting approximately 15 to 20 seconds, but harder than at 0130 Xray. I again looked towards the mountains for any signs of volcanic activity, but still could see none. I made a second round of the building to see if any damages had resulted but none was apparent.

The crew was gathered in the Recreation Hall discussing the shocks, their probable cause and location when a crew member stated he had talked with Scotch Cap Light Station after the second shock and they were attempting to contact Dutch Harbor Radio for any news of the quakes.

At 0218 Xray a terrible roaring sound was heard followed almost immediately by a very heavy blow against the side of the building and about 3 inches of water appeared in the galley recreation hall and passageway. From the time the noise was heard until the sea struck was a matter of seconds. I should say retentive and ten seconds at most. Ordering the crew to get to the higher ground of the DP/DF building immediately. I went to the control room and, after a couple of calls to Kodiak and Adak Net Control Stations, broadcast a priority message stating we had been struck by a tidal wave and might have to abandon the station, and that I believed Scotch Cap Light Station was lost.

The wave which struck Scotch Cap was over 100 feet tall and obliterated Scotch Cap Lighthouse. Officer-in-charge Anthony L. Petit and the four coastguardsmen serving at the lighthouse were likely killed instantly.

At 0345 I went to edge of hill above Scotch Cap Light Station to observe conditions there. The way was littered with debris, and the Light Station had been completely destroyed. I returned to the DF Station and with DAgostino, continued cleaning up water and muck about generators. At 0550 had one generator running full power, at this time transmitted a dispatch to the DCGO 17 ND via Kodak re conditions. At 0700 went down to the site of the Light Station, the sea by this time having receded to its usual limits, and in company with several crew members searched among the debris for any signs of bodies of personnel. On top of hill behind the Light Station we found a human foot, amputated at the ankle, some small bits of intestine which were apparently from a human being and what seemed to be a human knee cap. Nothing else was found. At 0725 was informed Sarichef Beacon heard. At 0800 sent out searching parties to attempt to locate any trace of Scotch Cap personnel. Searching parties later returned and reported no trace of Scotch Cap personnel. The crew of the lighthouse was comprised of Petit CBM, Oinc; Pickering , MoMM2; Dykstra, S1c; Ness S1c; and Colvin F1c.

Search parties later recovered the body of Pau J. Ness. His remains along with unidentified portions of other bodies were buried 300 years east of Scotch Cap Lighthouse.

1950  A rectangular fog signal building with a short light tower at one of its ends was erected.

For a larger map of Scotch Cap Lighthouse, click the lighthouse in the above map.