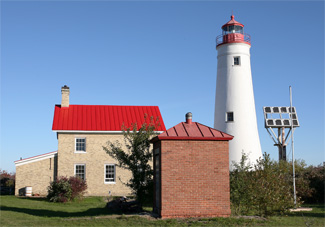 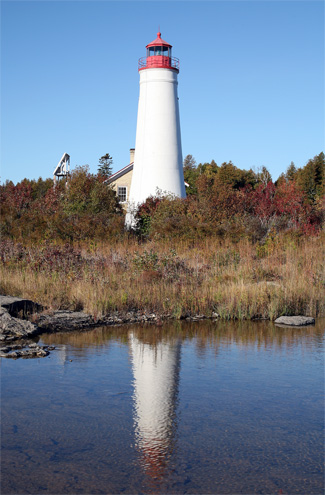 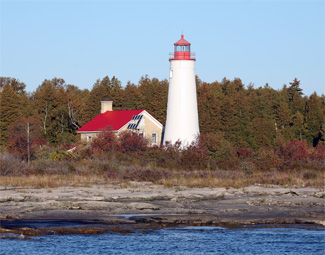 Thunder Bay Island is the largest and outermost of three islands located a couple of miles offshore from the northern entrance to Thunder Bay. While Thunder Bay served as a refuge for mariners, the surrounding reefs and islands snagged many a vessel. Thunder Bay National Marine Sanctuary was formed in 2000 largely to protect one of the countrys best-preserved and historically significant collections of shipwrecks. Ranging from an 1844 side-wheel steamer to a modern, 500-foot-long freighter, the sanctuarys shipwrecks are a microcosm of maritime commerce on the Great Lakes. On March 3, 1831, Congress appropriated $5,000 to enable the Secretary of the Treasury to provide, by contract, for building a light-house on the outer Thunder Bay Island. Henry T. Blake signed a contract on August 30, 1831 to build the lighthouse, and later that same day, he assigned Jeremiah Moors to perform the work. Moors proceeded to the island with the government agent and started building a tower on a site selected by the agent. The tower was nearly complete when a gale spawned a tremendous sea that swept across the outer part of the island. After being awash for some time, the tower toppled over.

A site farther removed from the lake was then selected, and in 1832 Moors built a roughly forty-foot-tall, rubblestone tower, using material from the destroyed tower, along with a one-and-a-half-story, stone dwelling, which measured forty by twenty-one feet. The total cost for the dwelling and second tower came to $4,094, but Moor insisted that he be paid for the mortar and labor required for the first tower. After multiple petitions to the U.S. House of Representatives, it appears Moors was finally compensated in the 1850s.

An 1837 inspection of Thunder Bay Island Lighthouse noted, This light is very well situated, and of great service to the navigator, in showing not only his situation, but also a place of shelter in bad weather. When Lieutenant James T. Homans visited the light the following year, he was alarmed at the perilous state of the station:

The base of this light-house is now nearly washed by the waters of the lake; should their present high state continue, it cannot stand long. The best means of preservation occurring to me would be, to build cribs of large timber, and fill them with stone, in such positions as to form a wall on the shore of the lakeImmediately in the rear of the present light-house buildings at this place is ground of considerably more elevation, where they would be safe; and it would, perhaps, be more economical in the end to demolish and rebuild them there.

The lake level must have soon dropped, as there is no record of any protective work being built, and the 1832 lighthouse, though modified, remains standing to this day as the second oldest lighthouse on Lake Huron. Thunder Bay Lighthouse was refitted in 1841 with eleven lamps and fourteen-inch reflectors, which produced a fixed white light visible for up to fourteen miles.

In 1852, the newly created Lighthouse Board recommended that a fog bell be established on Thunder Bay Island at the cost of $2,500. After a delay to perfect the fog-bell machinery, the fog signal was finally placed in operation in 1855. Two years later, the tower was rebuilt. The upper fourteen feet of the old tower was encased in brick, and the brickwork was extended an additional ten feet. The refurbished tower measured fifty-seven feet, from base to ventilator ball, while its outer wall tapered from seventy-nine inches at the base to twenty inches at the lantern room. A revolving fourth-order, L. Sautter Fresnel, equipped with six bulls-eye panels, was installed atop the tower in 1857 and produced a fixed white light varied every ninety seconds by a flash.

On March 2, 1867 Congress appropriated $8,000 for rebuilding the keepers dwelling at Thunder Bay Island. A new nine-room, two-story, brick dwelling, connected to the tower by a twenty-two-foot-long covered passageway, was completed in 1868.

In 1870, the Lighthouse Board noted that a fog bell was insufficient for a position of such danger and importance and recommended that funds be provided for a steam fog signal. A fog signal building was constructed on the island in 1871 and equipped with a horizontal boiler to power a ten-inch whistle. The fog signal was soon judged to have rendered excellent service, and in 1877, a duplicate fog whistle was established on the island to ensure one whistle was always operable.

In 1882, the Lighthouse Board recommend that a new tower be built after noting the current one was often damp and that its lower portion, being built of rubblestone, was difficult to keep in good repair. Two years later, the Board added that the dwelling was also damp and concluded: There seems to be no remedy for this except to rebuild on a better site. Either a remedy was found or the dampness just ignored, as not further mention of the issue was made by the Lighthouse Board.

In 1884, a 1,220-foot-long tramway for delivering coal was run from the fog signal buildings to a landing on each side of the island. Water for the steam fog signal was provided by a well blasted into the rocky island, and in 1890, a wooden tank, which was six feet deep and had a diameter of six feet, was provided for storing the water.

A brick oil house was built in 1903 to house the more volatile kerosene being burned in the lantern room. On May 21, 1913, the intensity of the light was increased from 5,600 to 50,000 candlepower by changing the illuminant to incandescent oil vapor. At the same time, the interval between flashes was reduced to thirty seconds. In 1938, the lighthouse was resurfaced and painted white to make it more visible to mariners. Prior to this, the towers daymark was yellow, the natural color of its bricks. The light was electrified in 1942, increasing its intensity to 60,000 candlepower.

At the opening of the shipping season in March 1914, Captain George Whitten, accompanied by three other men, took Keeper William R. Bennetts out to Thunder Bay Island in the fishing tug Fannie A.. After dropping off Keeper Bennetts, the tug became imprisoned by large ice floes, and the four men set off in a skiff to reach Sugar Island. Keeper Bennetts, with the aid of a telescope, spied the men abandoning the tug, but at dusk, they were still trying to make land. Though the newspaper account of this incident didnt mention if the four men survived, at least Captain Whitten did, as he was still working on a fishing tug according to the 1920 census.

Keeper Bennetts time on Thunder Bay Island from 1902 to 1919 made him the stations longest serving keeper. The station was staffed by just a head keeper until an assistant keeper was assigned in 1860 to help with the added work created by the addition of the fog bell. The position of second assistant keeper was added in 1906, the same year the brick fog signal building was built.

Keeper Bennetts began his lightkeeping career on Lake Superior where he served as an assistant keeper on Manitou Island from 1891 to 1897 and then at Whitefish Point from 1897 to 1901 before being promoted to head keeper at Thunder Bay Island. Bennetts returned to Lake Superior in 1919 to become the first and only head keeper of the newly constructed Sand Hills Lighthouse.

Thunder Bay Island Lighthouse, one of the last staffed stations on the Great Lakes, was automated and closed in 1983. Four years later, the structure was placed on the National Register of Historic Places, but with no resident keepers, the property was quickly falling into disrepair. When the lighthouse was declared excess property by the Coast Guard in 1996, local concerned citizens formed the Thunder Bay Island Preservation Society (TBIPS) to restore and preserve the structures on the island. The society signed a lease on station and set to work raising funds, clearing brush, and making repairs.

TBIPS was awarded a $110,000 Clean Water Initiative grant in 2001 to repair the cracked stucco covering on the lighthouse, but had to raise $27,500 in matching funds. The group struggled to come up with the money, but finally succeeded after being given a one-year extension. Cusack Masonry Restoration spent just over a month on the island during the summer of 2004, and the end result was a beautifully restored lighthouse.

The Coast Guard hired a contractor to perform two weeks of environmental remedial action at the lighthouse site in 2012 in anticipation of divesting the property, and the lighthouse was formally transferred to Alpena Township during a ceremony held on October 25, 2014. Thunder Bay Island Preservation Society will continue to care for and maintain the lighthouse.

For a larger map of Thunder Bay Island Lighthouse, click the lighthouse in the above map.

A boat or plane is needed to see the light. We chartered a dive boat out of Alpena. In addition to the lighthouse, we were able to see several boat wrecks.

You can get an up-close look at the lighthouse by joining Thunder Bay Island Lighthouse Preservation Society and helping with the restoration effort.