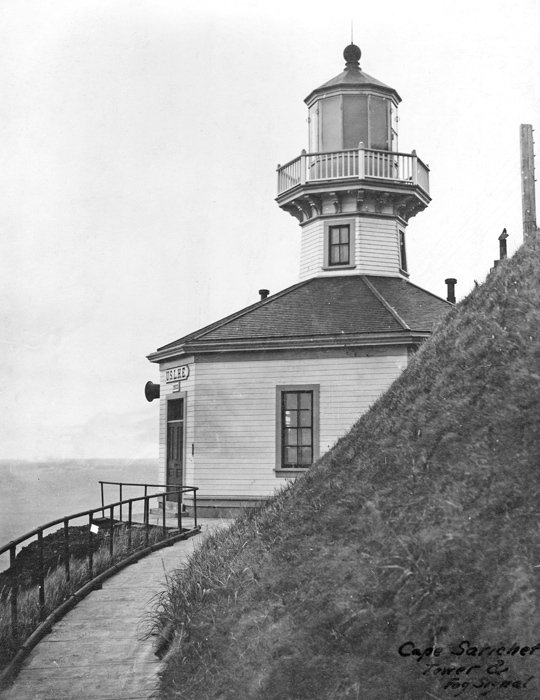 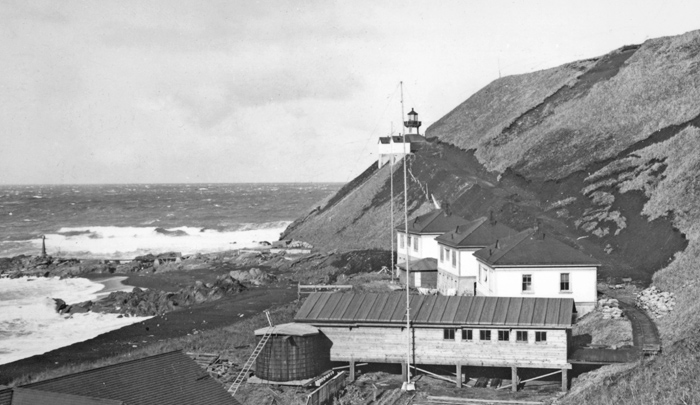 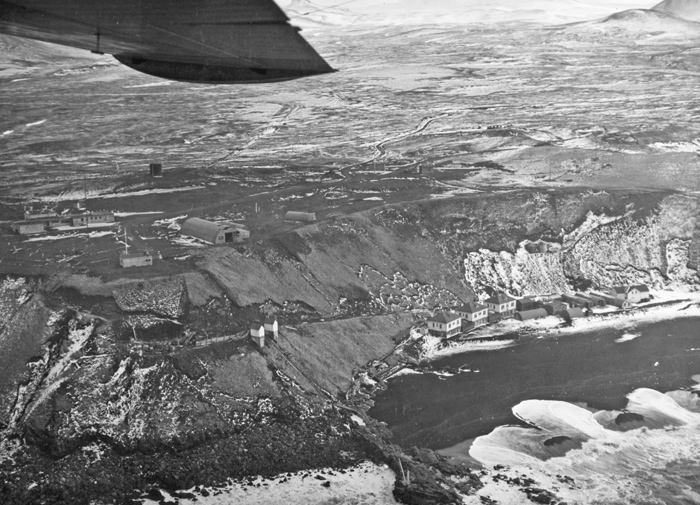 1902  Cape Sarichef, Alaska.Plans and specifications for the structures were made, and on March 22, 1902, proposals were opened. The bids were so excessive that they were rejected and the construction of the station was deferred until sufficient funds are available.

1903  Cape Sarichef, Alaska.The steamer Homer, which was used on construction of Scotch Cap light-station last year, was again chartered on April 20,1903, and left Astoria, Oreg., on April 29,1903, with men and material for constructing the station. She arrived at the site on May 13, 1903, and discharged her cargo. She returned to Portland on June 12 for another load of material and sailed for the station on June 23. The foundation walls of the dwellings were put in and much excavation was done for the fog-signal building.

1903  Cape Sarichef, Alaska.The foundation walls of the dwellings were put in and much excavation for the fog-signal building was done. The station will be ready to go into operation soon after the lantern, which is overdue, is received from the contractor.

1904  Cape Sarichef, entrance from Bering Sea to Unimak Pass, Aleutian Islands, Alaska.The station was completed on October 1, 1903, with the exception of placing the lantern. On October 1, 1903, while unloading material, the small boat capsized and one of the laborers was drowned. Men and material for completing the work were sent up to the station in May, 1904. No reports have been received since that date. It is expected that the station will be ready by July 1, 1904.

1905  Cape Sarichef, Alaska.The oil engine hoisting apparatus, located on the reef westward from the station, was damaged by storms last winter, and the engine house in which it was located was carried away. Two small portable hoists were shipped to the station, one to be used for operating the derrick and the other for hauling ears up the incline to the oil house. The air for operating the hoists is to be piped from the fog-signal building. A telephone and call bell system was installed, and the fog-signal apparatus was put in working order.

1905  Cape Sarichef, Alaska.The automatic siren was in operation some 81 hours and consumed about 85 gallons of oil.

1906  Cape Sarichef, Alaska.This first-class comprest-air automatic siren was in operation some 127 hours, June not included, and consumed some 254 gallons of oil.

1923  The most remote lighthouse of this country is that at Cape Sarichef, marking the Unimak Pass from the Pacific Ocean into Bering Sea. From the Alaska lighthouse headquarters at Ketchikan the lighthouse tender must make a roundtrip voyage of 2,700 miles to supply this station, and it can make this trip only once a year. The mail boat leaves mail when landing is possible, but a few years ago the light keepers went 10 months  from August of one year to June of the next  without receiving mail. This in the only lighthouse on the entire shoreline of Bering Sea. The keepers at this station remain on duty for three years, and then in turn are allowed a years leave of absence. To relieve the isolation, radio telephones were recently installed at this station and at Scotch Cap Lighthouse, 20 miles to the southward.
Some tragic events occur in this remote lighthouse work. In October 1914, the keeper of Cape Sarichef Lighthouse became ill. A cutter of the Revenue Service was sent to the station, and in removing him to the vessel the boat was capsized near the beach and the light keeper, a surgeon of the Public Health Service, and four men were drowned.

1923  Complete radio telephone transmitting and receiving stations were installed at Cape Sarichef and Scotch Cap Light Stations, Alaska, by the Navy Department in 1921. Some minor difficulties were experienced during the first year of operation, due to burnouts of the motor generator and wrecking of one of the steel antenna masts by a storm. Repairs were made in 1922, and since then but little trouble has been experienced. The keepers at both stations have mastered the mechanical and electrical details of the installations sufficiently to keep them in operating order, and radiophone communication between the two stations which are about 17 miles apart, is maintained without any difficulty.
Owing to lack of other radiophones in that part of Alaska, one keeper at each station has taken up the study of the telegraph code, and the keepers are now able to communicate with each other by key and are also able to exchange messages with the mail steamer at distances of up to 165 miles.
At 65 miles the voice from either station can be picked up by the steamer, even on the opposite side of the high mountains.
This means of communication has been of great service to the stations and to the mail steamer. As the boat is approaching Unimak Pass in formation is obtained direct from both stations as to the landing conditions, and no time is lost if a landing can not be effected. When a landing is impossible at Cape Sarichef, the mail bot is instructed to land the mail at Scotch Cap. It is then sent overland by one of the keepers
Both stations exchange code messages with the naval radio station at Dutch Harbor and are thus in touch with the outside world, a matter of vital importance in emergencies.

1950  Coast Guard replaces lighthouse with a modern one  a short hexagonal tower placed at one end of the fog signal building.

1979  Station automated. New light erected on a steel skeletal tower next to the lighthouse. Old light, fog horn, and radiobeacon were discontinued. Buildings demolished in 1999.

For a larger map of Cape Sarichef Lighthouse, click the lighthouse in the above map.