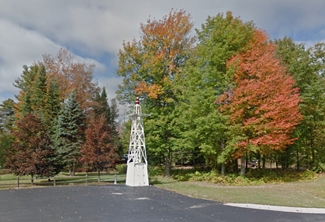 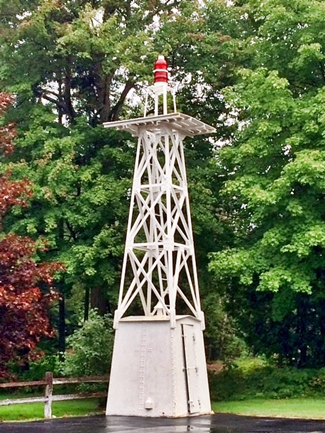 Fishing and lumber were the primary drivers of the local economy during the second half of the nineteenth century. Located on the southern shore of the river, fifteen miles east of its mouth, is the Lumbermans Monument, a fourteen-foot-tall bronze sculpture that features three men standing by a log: a timber cruiser holding a Bible, a sawyer with his saw slung over his shoulder, and a river rat resting his peavey on the ground. At one time, there were eight sawmills operating near the mouth of the river. After valuable stands of white pine were located by the timber cruisers, the sawyers would cut down the trees during the winter and haul them on sleds to the river. It was then the job of the river rats to see that the logs reached the sawmills, where they would be cut into boards. The granite base of the Lumbermans Monument is engraved with the following words: Erected to perpetuate the memory of the pioneer lumbermen of Michigan through whose labors was made possible the development of the prairie states.

River mouths often served as harbors on many of the Great Lakes, and the Lighthouse Board recognized the need for lights to mark them. On November 20, 1873, a light was established on the outer end of the north pier at the entrance to Au Sable River. Two other lights were later established on Lake Huron to guide mariners into rivers: one at Alpena River in 1875, and another at Cheboygan River in 1880. George H. Keating was hired as the first keeper of Au Sable Pierhead Lighthouse at an annual salary of $500. As no dwelling was provided for the keeper, Keating was required to provide his own lodging.

The square, wooden, open-frame tower at Au Sauble River was twelve feet square at its base and tapered to eight feet below its lantern room. The tower stood just over thirty-two feet tall from its base to the ventilator ball atop the lantern room, and a wooden ladder led from the pier up to the lantern room. A sixth-order lens was originally used to produce a fixed red light, but by 1884, a fifth-order Sautter, Lemonnier, & Cie. lens was in use.

A fire damaged the pierhead light on May 16, 1885, but the tower was quickly repaired. Tom Hendrickson replaced Keating as keeper of the light in 1883. In 1910, he complained to Inspector Oliver G. Brown that as he had no place to keep his boat he was forced to tie it up to a post on the bank of the river. Boys would frequently steal his oars and injure the boat. At this time, a boardwalk led down the pier and then an elevated walkway, with two flights of steps, lead from the outer pier to the towers enclosed upper portion.

On July 11, 1911, fierce winds whipped up flames that all but destroyed the settlements at the mouth of the river. A newspaper account from that day, entitled Fierce Rush of Flames Drives Many into Lake, described the scene:

Oscoda and Au Sable were wiped off the map this afternoon by fire.

Forest fires northwest of the towns were swept into the slab yards west of Au Sable by the fierce gale which was blowing, and in spite of everything that could be done the business section and most of the residences of Oscoda were burned.

Not a business is standing in Oscoda tonight. The two mills of the H.M. Louds Sons company were burned, together with about 3,000,000 feet of lumber piled on the lake shore.

During the evening the wind changed and swept the flames down into Au Sable, and it is expected that every building in that town will be burned.

Hundreds of people are homeless and have nothing except what they had on when they escaped. The fierce rush of flames drove hundreds into Lake Huron, and while it is impossible to ascertain whether any lives were lost, it is feared that many have perished.

Fanned by the fierce gale which was blowing at the time, the fire swept over the doomed cities with such rapidity that all the citizens could do was to get away with what few belongings they could snatch up in their mad haste. A relief train was sent from East Tawas by the D. & M. railway

Hundreds of the people driven from their homes by fire took refuge on board the freighter Kongo, which was lying at the docks when the fire broke out. The steamer took on board as many as possible

Five lives were lost in the fire, but contrary to some reports, the wooden pierhead tower survived, though its days were numbered. Keeper Tom Hendrickson was in charge of the pierhead light for thirty years and only left because a metal tower topped by an automated light was erected in place of the kerosene-burning light. The following description of this new tower appeared in the Annual Report of the Lake Carriers Association for 1912:

On December 10, the light on Au Sable pier head was moved to the new tower and the characteristic changed from a fixed to a flashing red light of about 130 candle power, 34 feet above the water, showing a flash every three seconds.

The new structure is a white pyramidal skeleton steel tower surmounting a white tank house on a square concrete base rising eight feet above the water and located on the north breakwater in front of the former frame tower, which has been removed. The illuminant has been changed from oil to acetylene.

Fifty-eight-year-old Keeper Hendrickson was not ready to retire and was transferred to Munising, where he was in charge of the range lights there for about a decade.

In 1940, Au Sable Pierhead Light was electrified and its characteristic was changed from flashing red to fixed red. The 1912 skeletal tower was removed from the north pier in 1957, and new towers were placed at the outer end of both the north and south piers at that time. The 1912 tower stood on the grounds of the Oscoda Yacht Club for many years until David Allen, owner of Great Lakes North Gallery, purchased the tower in 2013 for $1,500 and relocated it to his business. Another individual was bidding on the tower with plans to move it across the state, but Allen was determined that it remain in the area. As the tower was in poor condition when he acquired it, Allen hired a man who worked on freighters to paint it for $100.

In October 2016, the Oscoda Downton Development Authority voted unanimously to purchase the tower from Allen for $3,500. Oscoda Yacht Club was sold at a bankruptcy auction and demolished earlier in 2016 so it is no longer an available site for the lighthouse, so the township worked to find a place on the main road where the tower could be placed. The township moved the tower to their maintenance yard and then paid James Dellar $3,100 to sandblast, prime, and paint the tower in 2017.

The tower was placed at its new permanent home on October 15, 2018 just off Highway 23 in front of the Huron Shores Artisan Hall in downtown Oscoda. A dedication ceremony was help on November 7, 2018, complete with a marching band and a Coast Guard officer from Saginaw Bay.

The days of Au Sable River being used as a conduit for the lumber industry ended with the fire in 1911, but the river now sees other activity. Each summer the Au Sable River Canoe Marathon sees pairs of competitive canoers enter the river at 9 p.m. near Grayling and emerge the next day at Oscoda, after having paddled over 120 miles. For those wanting to see the river without expending so much energy, the paddlewheeler Au Sable River Queen offers leisurely two-hour trips on the river.

For a larger map of Au Sable Pierhead Lighthouse, click the lighthouse in the above map.

The tower is located along Highway 23 in Oscoda, between Michigan Avenue and River Road.