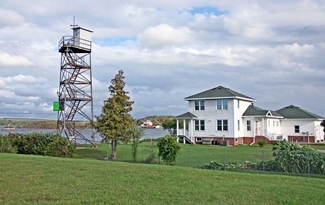 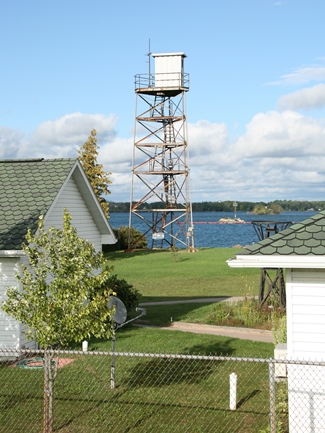 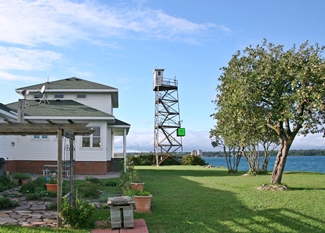 The first set of parallel locks at Sault Ste. Marie was completed in 1855 to bypass rapids on St. Marys River, which have a fall of twenty-one feet, and allow ships to sail between Lake Superior and Lake Huron. These locks had a length of 350 feet, and during the first season the locks were open, 100,000 tons passed through them. Five years later, the usage had grown to 400,000 tons. In 1875, it was 1,260,000 and in 1880 1,750,000 tons. By 1880, the iron ore from Lake Superior was providing one-third of the ore used in pig iron production in the United States. A new 515-foot-long lock, known as Weitzel Lock, was completed in 1881, and operation of the locks was transferred from the State of Michigan to the federal government that year. As traffic and boat sizes continued to increase, the need for a new lock to replace the 1855 locks was apparent. In 1887, a Waterways Ways convention was held at Sault Ste. Marie and endorsed the construction of a new lock and the improvement of Hay Lake Channel. The proceedings of the convention noted:

The Hay Lake improvement is urgent equally with the new lock and both should go on together. When the Hay Lake improvement is completed, under General Poes project, there will be a straight channel, carrying twenty feet of water the same as the new lock, from the head of Sugar Island and through the middle Neebish to a point of connection with the present channel just below, saving a distance of eleven miles between Lake Superior and Lake Huron. Navigation at night will then be practicable and the heavy losses incurred by our shipping, because day passages only of the river are now possible, will be avoided; that loss was estimated to be on the business of last year not less than $500,000.

Two miles below the locks, St. Marys River separates into two branches: one lies to the west of Sugar Island and expands into Hay Lake, while the other lies to the east of the island and forms Lake George. As the route through Lake George was the easiest to improve, it was dredged first, and became the primary route for transiting St. Marys River. Though this channel through Lake George followed the U.S-Canadian for much of its length, it was known as the American Channel.

In a report in January 1882, Lieutenant-Colonel Godfrey Weitzel estimated that a channel could be opened through Hay Lake that would then rejoin the American Channel on the west side of Neebish Island for $2,127,292. Congress provided $200,000 on August 2, 1882 for the work, and the following year some dredging was carried out along with a survey of the lower part of Hay Lake. Improvement of Hay Lake and the Neebish Channel to link the lake to the American Channel was carried out between 1883 and 1894, when the new route, which reduced the distance ships had to travel by eleven miles, was opened. An 800-foot-long lock named for Orlando M. Poe opened in 1896, replacing the original 1855 locks. The Poe Lock was expanded to a length of 1,200 feet and a width of 110 feet in 1968.

On August 18, 1894, Congress allocated $43,550 for lighting Hay Lake, and a series of navigational aids numbered from 1 to 27 were built along the waterway. Number 1 was Lower Hay Lake Channel Buoy, while Number 27 was North Entrance Light, also known as Little Rapids Cut Light. North Entrance Light No. 27 was built to mark the northern entrance to the new Hay Lake Channel, which entrance is known as Little Rapids Cut.

A thirty-five-foot-square crib was constructed of sawed timbers that were laid tight and then filled with stone to provide the foundation for North Entrance Light. The crib was placed in twenty feet of water and rose six-and-a-half feet above the river. The upper portion of the crib was used for a cellar and for oil storage, and atop the crib was built a twenty-four-and-a-half-foot-square dwelling. An octagonal lantern room surmounted the two-story dwellings hipped roof. A sleeve revolved around the lamp inside a fifth-order L. Sautter, Lemmonier & Co. Fresnel lens mounted atop a pedestal in the lantern room to produce a white light that was on for two-and-a-half-seconds and then off for two-and-a-half-seconds. The lighthouse was painted yellow with white trim and a red roof.

Two keepers were assigned to North Entrance Light in 1895: Sidney A. Knox, a head keeper who was paid an annual salary of $500, and John M. Sweet, an assistant who earned $400. The assistant keeper lived in the five-room dwelling atop the crib with his family, while the head keeper lived ashore at Mission Point, located five-eighths of a mile southeast of the crib.

Stone was removed from the upper portion of the crib to form an oil room that could be reached from a trap door in the decks crib, but when it was found that oil butts stored there were frozen into the ice in spring, a brick oil house was built on shore near the boathouse on Mission Point.

The keepers dwelling on Mission Point, adjacent to the landing for the ferry to Sugar Island, was sold into private hands in 2002. The light on the tall tower next to the dwelling appears on the Coast Guards Light List as Light 99. Historically, Light 99 was a post-lantern light known as Little Rapids Cut Upper West Light.

For a larger map of Little Rapids Cut (North Entrance) Lighthouse, click the lighthouse in the above map.

From Portage Avenue near the locks in Sault Ste. Marie, drive two miles east to the ferry landing for Sugar Island, where you will see the keeper's dwelling and light.