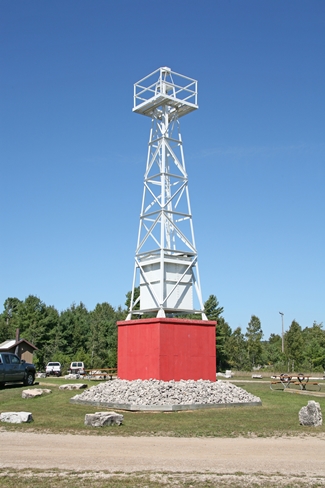 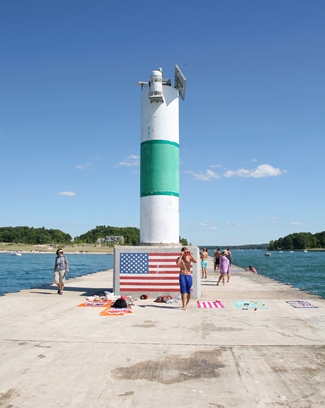 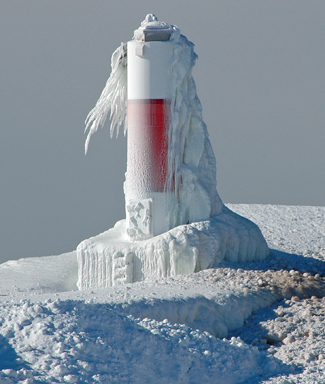 Portage Lake, located on the eastern shore of Lake Michigan between Ludington and Frankfort, was connected to Lake Michigan by Portage Creek, when European settlers first came to the area. Around 1845, Joseph Stronach began work on a mill at the outlet of Portage Lake to process the lumber obtained from the surrounding forests. After Joseph Stronach drowned in Lake Michigan in 1850, his nephew, James Stronach, ran the mill for a short while before it passed into other hands. Porter and Company began running the mill in 1867, and shortly thereafter homesteaders filed a suit to have the dam removed as it had raised the natural level of the lake, submerging acres of valuable farm land. After a trial, Circuit Judge J.G. Ramsdell issued an injunction in 1870 ordering the dam to be removed within seven months. When the defendants failed to remove the dam, the complainants purchased property a mile south of Portage Lake and set about digging a ditch to return the lake to its natural level. A dance was held on May 13, 1871 to celebrate the completion of the ditch, and at midnight the new channel was opened. The Manistee Times recorded the event:

The water ran through with great force, tearing out great trees and carrying them far into Lake Michigan. On Monday the tug Williams made the first entrance into Portage Lake. She was hailed by waving of hats, handkerchiefs and loud hurrahs and firing of guns, which compliment she fully acknowledge.

In just five hours, the water from Portage Lake had widened the four-foot-wide, hand-dug channel into one that was three hundred feet wide and over twenty feet deep. In conclusion, the article in the Manistee Times noted: With an appropriation for harbor improvements, Portage Lake will be one of the safest harbors on Lake Michigan.

The desired money was years in coming, but work on improvements finally began after an initial $10,000 was allocated on July 1, 1879. By the end of June 1880, a fifty-foot-wide channel had been made and additional funds were requested for piers to line the channel. During the summer of 1882, the north pier reached a length of 815 feet and the south pier 575 feet.

In its Annual Report of 1891, the Lighthouse Board described the completion of lights to mark the entrance to Portage Lake:

Portage Lake occupies a position in the dangerous bight between Point Betsey and Big Point Sable, and for several years has been under improvement by the United States as a harbor of refuge for the general commerce of the lake. The width of entrance, 380 feet, is exceeded by but one of the harbors, Grand Haven, on the east shore of the lake, and while the works still lack much of their projected development and the entrance depth is as yet by no means what it is designed to secure, the completion of the harbor will furnish a valuable shelter in case of need, and it has been shown that in its present condition the harbor would be of service if it were so marked by lights as to permit its use after dark. Plans and specifications were made therefore for the establishment of a gasoline pierhead fixed red light of the fourth order, and a fixed red tubular lantern pierhead range-light at this place. Construction was begun on March 16 and completed early in May. The lights were exhibited for the first time on the night of April 30, 1891. The lights stand near the outer end of the north pier, this being the only portion of either pier that would support them. The best water is now near the north pier, but it is probable that when the construction is completed the channel will occupy a more nearly central position, and inasmuch as the harbors on the east coast are in general lighted on the south side, the Portage Lake lights should be placed on the south pier for the sake of uniformity. The focal plane of the main light is 40 feet above the level of the lake, and it can be seen from 2 to 3 miles in clear weather. The structure is a square wooden tower painted white, surmounted by a black iron lantern with a brown parapet. The lower part of the tower is open framework, but the upper part is inclosed for a watchroom. A dwelling for the keeper should be erected on the south shore, as there are but few houses in the vicinity which could be used as quarters. The estimated cost of the building proposed is $3,500, and it is recommended that an appropriation of that amount be made for this purpose.

John Langland began his lighthouse keeping career as second assistant keeper at Ile Aux Galets Lighthouse in 1889. After just one year, he was promoted to first assistant keeper at Manistee in 1890 and then in 1891 he became head keeper at Portage Lake. It is unclear where Langland lived during his first years at Portage Lake, as the Lighthouse Board petitioned Congress annually for $3,500 to build a keepers dwelling through 1906, but it is likely that he rented housing near the piers.

In 1900, a 500-foot-long lifeline, consisting of twenty-two wrought-iron posts and five-eighths-inch galvanized rope, was extended shoreward from the pierhead light as a protection for Keeper Langland in going to and from the light.

After the piers at Portage Lake were extended, the post light and pierhead beacon were moved to the outer end of the north pier and 750 feet of elevated metal walkway were erected. The lights were activated in their new locations for the first time on October 26, 1901. A brick oil house was added to the station in 1913.

On November 8, 1905, the eighty-eight-foot, double-masted schooner Abbie, bound from Beaver Island to Milwaukee with a cargo of bark, ran aground just north of the piers at Portage Lake. A special train rushed the lifesaving crew from Manistee to the rescue, and a gasoline launch towed them to the wreck. One member of the four-man crew had managed to swim ashore, but the lifesaving crew saved the remaining three, who were crouched atop the vessels cabin, the only part of the schooner that wasnt submerged. The shipwrecked crew was taken to Keeper Langlands house, where they were given food and medical care. As the men only had four cents, Keeper Langland provided money for them to travel to Manistee.

On June 20, 1917, the front range light on the north pier was discontinued and the rear light was changed from oil to unwatched acetylene. The automated light produced a white flash every three seconds and was known as Portage Lake Pierhead Light. As a keeper was no longer required at Portage Lake, the elevated walkway was removed and Langland was transferred to Waukegan, Illinois as first assistant.

A white, steel, skeletal tower replaced the 1891 wooden pierhead tower at the entry to Portage Lake in 1930. The October 31, 1930 edition of Onekama Lake Breeze provided the following on the change: A government boat has been at the Harbor for the past few days while the crew has been erecting a new tower and installing a new automatic harbor light at the piers at the Channel. C. McCullen was in charge of the work. The new tower was placed on a concrete foundation and had a small building within its base to house the acetylene tanks that fueled the light atop the tower. This new light also had a characteristic of a white flash every three seconds and was serviced by the keepers at Manistee.

After a helicopter removed the skeletal tower from the north pier in July 1985, it was relocated to Voyagers Cove Marina in Manistee, where it stood until 1997 when the marina was razed. Portage Lake Association purchased the tower, which was being stored at Domres Construction near Norwalk, and by September 1997 the tower had been sandblasted and coated with rust retardant.

Finding a home for the salvaged tower proved problematic. Plans to place it midway along the renovated south pier at Portage Lake in 2001 fell apart after the Army Corp of Engineers insisted that Onekama Township would need liability insurance for its plans to light the piers. Portage Lake Association wanted to turn the tower and money in its lighthouse fund over to Onekama Village to have the tower erected in North Point Park, but when it was decided the structure didnt match the theme of the park, the tower and funds were given to Portage Lake Harbor Commission, who wanted to erect the tower at the Department of Natural Resources launch site on Portage Lake.

On July 23, 2010, the tower was moved from Domres Construction to Onekama Marine, where it was repaired and painted before being placed atop a prepared concrete base at the launch site on July 15, 2011. After additional funds had been raised, a bronze historical plaque was placed at the site and the tower was relit on July 5, 2015.

If you visit the 1930 tower at the launch site, continue west around Portage Lake to view the modern pierhead lights that now mark the entrance from Lake Michigan. The area just north of the piers is named Captain John Langland Park, in honor of the dedicated keeper who spent twenty-six years tending the light to help guide mariners into Portage Lake.

Located at the launch site on the north shore of Portage Lake, near the intersection of Lake Park Drive and West Fairway Street.
Latitude: 44.36934, Longitude: -86.24712

For a larger map of Portage Lake Lighthouse, click the lighthouse in the above map.

From Highway 22 in Onekama, continue west around Portage Lake on Portage Point Drive for 2.2, and then turn left onto Seymour Street. After a half mile, turn right onto Lake Park Drive and drive to the launch site on the lake, where you will find the 1930 tower.