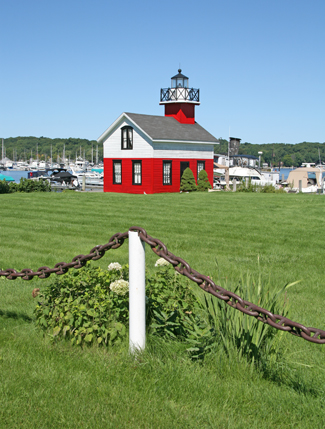 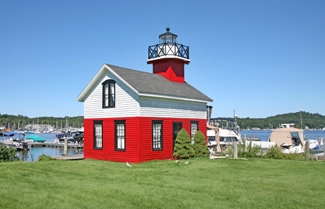 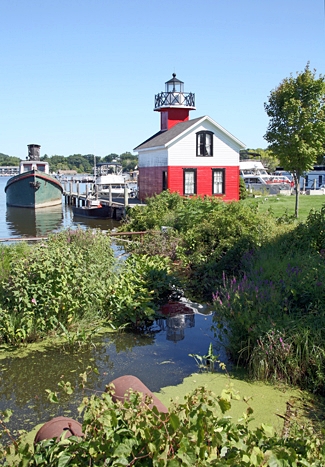 Kalamazoo River has a length of nearly 180 miles and runs through the cities of Battle Creek and Kalamazoo before emptying into Lake Michigan at Saugatuck. At the time of European contact, members of Potawatomi tribes inhabited the area around the river. Fur traders frequented the river during the late eighteenth century, and several small communities were established along the river in the early nineteen century. On March 3, 1837, Congress appropriated $5,000 for a lighthouse at the mouth of Kalamzaoo River, and later that year, after having been appointed by the Board of Navy Commissioners to examine and select sites for lighthouse, Lieutenant G.J. Pendergrast spent four months sailing between Buffalo and Chicago. Pendergrast provided the following information on Kalamazoo River as part of his report:

Kalamazoo river is 30 miles north of St. Josephs; this is, also, a very large stream, and may easily be improved so as to admit the largest sized vessels. There are several flourishing towns on this river. Of course, it is much resorted to, and I therefore reported in favor of a light-house at its mouth.

Trueman H. Lyon of Tecumseh, Michigan was appointed superintendent of lights in the area and charged with, among other things, selecting a site for the lighthouse at the mouth of Kalamazoo River. Village lots 10 through 18 were purchased for the lighthouse from Horace and Sarah Comstock for $250 on March 5, 1838, but when Lieutenant James T. Homans of the U.S. Navy visited the area on September 5, 1838, he found that no preparations for building the lighthouse had been made other than the placing of a pile of stones at the intended location.

Work on the lighthouse was carried out in 1839, and Stephen D. Nichols was appointed its first keeper on November 1, 1839. Keeper Nichols had moved to the mouth of Kalamazoo River in 1834 as one of the early settlers of the area and built a store, warehouse, and docks to cater to the settlers. In its first incarnation, Kalamzaoo Lighthouse consisted of a thirty-foot rubblestone tower that was capped with a lantern room in which an array of six lamps and fourteen-inch reflectors was used to produce a fixed light at a height of forty-two feet above Lake Michigan.

In 1850, Henry B. Miller, Superintendent and Inspector of Lights on Northwest Lakes, reported that the water at the mouth of the river had worn away the bank and had protection put up at a small cost to preserve the lighthouse site. A sixth-order Fresnel lens replaced the array of lamps and reflectors in 1856.

With the old lighthouse threatened by erosion, a new one was erected in 1859 on a sand dune at a greater distance from the river. This structure consisted of a two-story dwelling with a square tower perched atop its pitched roof. Similar lighthouses were also built that year at St. Joseph, Cheboygan, and Tail Point. The lighthouse was built atop a foundation made up of three ten-inch-square, hand-hewn timbers that were bolted to cast-iron pilings driven into the sand and encased in concrete.

Private enterprises attempted to improve the entrance to Kalamazoo River by constructing slab piers that confined the rivers current and created a channel with a depth of seven feet. In 1869, the federal government stepped in and extended the piers.

At the opening of navigation in 1876, the light from Kalamazoo Lighthouse was transferred to a new frame structure erected at the end of the south pier at the entrance to the river. Keeper Samuel Underwood continued to reside in the 1859 lighthouse, but had to row across the river multiple times a day to tend the light. In 1883, a cellar was constructed under part of the dwelling and a cistern was built and equipped with a pump. Two years later, the east side of the sand hill, atop which the lighthouse stood, was covered with logs to prevent the sand from drifting.

The steamer Charles McVea collided with the south pier in 1892, damaging the pier and pierhead tower. As a result, the light was transferred back to the 1859 lighthouse, where it was exhibited on the night of August 16, 1892. By this time, the light was being produced by a fifth-order Fresnel lens.

On May 23, 1894, a fixed red lantern light was established on the outer end of the south pier. This light was exhibited from the lakeward end of a 240-foot-long conduit that was used for running the lantern in and out from a small lamp house on the pier that could be accessed via an elevated walk.

A fifty-nine-foot-long landing pier was built at Kalamazoo Lighthouse in 1899.

In 1906, a new entrance to Kalamazoo River was opened roughly a mile to the north and lined with piers. This change created Oxbow Lagoon along with the need for a new light to mark the mouth of the river. A concrete post and platform were erected at the end of the new south pier in 1907, and a fixed red lens lantern was displayed from the post. This new pierhead light was known as Saugatuck Harbor North Entrance Light while the 1859 lighthouse remained in operation as Kalamazoo Light.

On October 6, 1914, Saugatuck North Pierhead Light was established at the outer end of the north pier at the entrance to Kalamzaoo River, and Kalamazoo Lighthouse was discontinued on the same date. Not long thereafter, the lantern room was removed from the 1859 lighthouse.

George H. Baker was the longest-serving keeper of Kalamazoo Lighthouse, arriving in 1878 and retiring in 1909 after more than three decades at the station. George H. Sheridan, who had earlier served as an assistant keeper at Chicago Harbor, Calumet, and Michigan City, succeeded Baker and was the only keeper at Kalamazoo to have served at another lighthouse.

George Sheridan spent the first years of his life at South Manitou Island Lighthouse, where his father Aaron was head keeper. On March 15, 1878, Aaron Sheridan, his wife Julia, ten-month-old son Robert, and Chris Ankerson were returning from the mainland when their sailboat capsized about a mile from the lighthouse. All aboard save Ankerson drowned. Katherine Hutzler was babysitting the Sheridans five other sons at the time of the accident and often told the story of how the boys, who were between the ages of three and twelve, ran up and down the beach weeping while searching for the bodies of their parents and baby brother. George was nine when his parents drowned, and he and his brothers were taken in by relatives.

George and his younger brother Alfred both followed in their fathers footsteps and became lighthouse keepers. While Alfreds career lasted less than a year, Georges spanned nearly two decades. Keeper George Sheridan would keep a watchful eye on the water surrounding his station and was instrumental in several rescues. In 1914, he rescued four men and three women and brought their gasoline launch Quindess to safety.

After Kalamazoo Lighthouse was discontinued in 1914, George Sheridan was appointed assistant depot keeper at St. Joseph, Michigan. Before beginning his new assignment, George was advised to seek treatment for melancholia and accordingly took a train to Chicago and then to Evanston, where he was admitted to Evanston Sanatorium, not far from Grosse Point Lighthouse, where his uncle Edwin J. Moore served as keeper. After treatment, George returned to his family at Saugatuck but then went back to Evanston in March 1915 for additional medical care.

A few days after arriving at Grosse Point Lighthouse on March 20, 1915, George failed to return from a walk, and his body was soon discovered hanging from a rafter in the stations boathouse. Upon hearing of the death, Lewis M. Stoddard, inspector of the twelfth district, wrote: Mr. Sheridan was considered one of the best and most trustworthy employees in the lighthouse service and this office deeply regrets his loss.

Frederick Fursman, co-founder of the Summer School of Painting (now Saugatucks Oxbow Summer School of Art), rented the decommissioned Kalamazoo Lighthouse from the government for ten dollars a year from about 1915 to 1935. Arthur F. Deam sublet the lighthouse from Fursman for a couple of years and then leased the lighthouse from the government before acquiring the property in 1937. Deam, a friend of Fursman, was a professor of architecture at the University of Illinois and then the University of Pennsylvania and later served as president of the board of directors of the Summer School of Painting.

The Deam family cherished their historic summer home near Kalamazoo River, as evidenced by their son Norm listing his home town as Saugatuck instead of Philadelphia when joining the Air Force. Each guest that entered the lighthouses rustic portals would have his height inscribed on a wall in the kitchen and then sign his name above the line indicating his height. The names of many celebrities graced the kitchen wall, but the marks that gave the Deams the most pleasure were those made each summer showing the increasing heights of their children.

On April 3, 1956, a tornado, which was part of forty-seven tornadoes spawned over a two-day period, touched down on the beach near Saugatuck and ravaged the 1859 lighthouse. This tornado cut a nearly fifty-nine-mile-long path through Michigan, destroying several homes, barns, and a mobile home park and killing seventeen people. Arthur Deam salvaged remnants of the lighthouse, including a few of the large beams and a pediment displaying the 1859 construction date, and incorporated them into a new lighthouse structure that he and his son Edward, associate dean of the College of Art and Architecture at the University of Illinois, designed and had erected in 1962 on the foundation of the old lighthouse.

Today, cylindrical structures are used at the rivers current entrance to display a red light from the south pierhead and a green light from the north pierhead. The remains of the wooden piers that marked the former entrance to the river can been seen along the shore of Lake Michigan. A replica of the 1859 Kalamazoo Lighthouse was built on the south shore of Kalamazoo Lake in 2002. While Kalamazoo Lighthouse was painted a buff color with white trimmings and had a black lantern room, the replica lighthouse is red and white.

For a larger map of Kalamazoo (Replica) Lighthouse, click the lighthouse in the above map.

From I-196 take Exit 36 and travel north on County Road A-2 toward Douglas/Saugatuck. After 1.9 miles, just before Kalamazoo River, turn left onto North Union Street from where you will see the replica lighthouse.