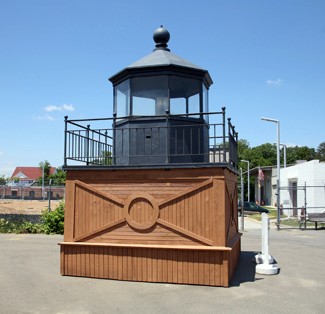 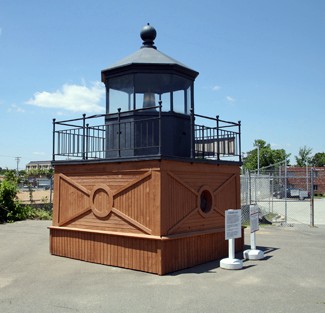 A lighthouse was built at Cove Point in 1828 to guide vessels along the western shore of Chesapeake Bay. At that time, the government had considered placing a light on Cedar Point, five miles south of Cove Point, but opted instead for Cove Point.

Sixty years later, in 1888, the Lighthouse Board requested funds for a lighthouse on Cedar Point and explained the need for the light:

The harbor at the mouth of Patuxent River is the best on the western side of Chesapeake Bay. Vessels about to enter this harbor from the south pass close to Cedar Point, where the water is deep near the shore. In thick weather sounding is no safeguard, as the change from deep to shoal water is abrupt. The establishment of a light and fog signal on Cedar Point would also be of much value to the general navigation of the bay, as most vessels pass near this point. It is estimated that a proper structure would cost $25,000.

The Lighthouse Board repeated its funding request annually until Congress finally appropriated $25,000 in 1893 for establishing a light and fog signal on or near Cedar Point. A one-and-a-half-acre tract of land near the point was acquired in 1894, and after borings were made to determine the character of the soil, plans and specifications for the lighthouse were drawn up. Contracts for providing the metalwork and for erecting the lighthouse were awarded in 1895, and the metalwork was delivered at the Lazaretto Depot near Baltimore the following spring. Work on erecting the lighthouse began on May 7, 1896, and by the end of June the concrete foundations for the structure were finished and the dwelling was partially framed. Built of brick and wood, the lighthouse consisted of a three-story dwelling with a square tower protruding from one corner of its pitched roof.

The station was finished by the contractor on September 20, 1896, and over the next month a ten-panel, fourth-order Fresnel lens was installed in the lantern room, and a 1,962-pound bell was mounted atop the three-story bell tower located near the lighthouse. The lantern rooms ventilator ball was situated fifty-one feet above the ground, and the bell tower rose to a height of thirty-five feet. Activated on October 31, 1896, the revolving lens produced a red flash every five seconds, while the fog bell was struck every thirty seconds during thick or foggy weather. A summer kitchen was located in the bottom story of the bell tower, and the station was also equipped with a brick oil house, a frame boathouse, and a small outhouse.

In 1914, the Arundel Corporation was given a permit to dredge for sand and gravel near Cedar Point, and shortly thereafter the bay was starting to threaten Cedar Point Lighthouse. A concrete sea wall was built in 1916 at a cost of $4,298 to protect the station, and three years later 1,000 tons of riprap were placed about the station to prevent the seawall from being undermined by sea action.

By the 1920s, Cedar Point Lighthouse stood on a small island, detached from the nearby peninsula, and in 1928, all of the lighthouse land save a 100-square-foot parcel was sold to the Arundel Corporation. A beacon was erected on the retained parcel to replace the lighthouse, and after this beacon was destroyed in a storm, a light was mounted on the old bell tower. A lighted buoy was placed offshore to mark the point in the mid-1950s, and the bell tower collapsed in 1957.

The Navy opened Naval Air Station Patuxent River on Cedar Point during World War II, and in 1958, the Navy acquired Cedar Point Lighthouse and the small lighthouse parcel. After the lighthouse was severely damaged by Hurricane David in 1979, the lantern room and its short tower were removed from Cedar Point Lighthouse in December 1981. In June 1983, the lantern room was placed on display atop a redbrick base at the Naval Air Test and Evaluation Museum. The heavily damaged lighthouse was dismantled in 1996, and pieces of the structure were given to Calvert Marine Museum in Solomons, where the sunburst pattern of wood slats featured in the lighthouses gabled roof ends can be seen. The lantern room was placed in storage in 2001, but was returned to public display at the Patuxent River Naval Air Museum in 2005, after the Navy Seabees built a wooden base for the lantern room.

For a larger map of Cedar Point Lighthouse, click the lighthouse in the above map.

The lantern room is owned by the Navy. Grounds open during museum hours.