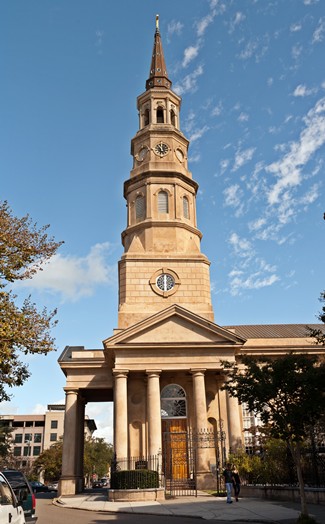 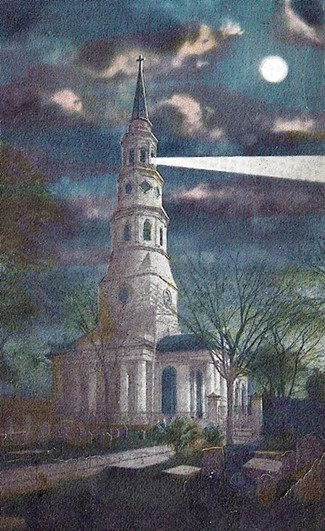 Named after General Thomas Sumter, a Revolutionary War hero, Fort Sumter was built atop a sandbar at the entrance to Charleston Harbor to protect the important seaport. Work on the five-sided, brick fort began in 1829, but the structure was still not finished on April 12, 1861, when the first shots of the Civil War were directed toward it. In December 1860, South Carolina became the first state to secede from the Union, and it felt the continued occupancy of Fort Sumter by Union forces was an affront to its independence. Besides housing guns to prevent hostile vessels from entering the harbor, Fort Sumter has also served as the site for various lights designed to help friendly vessels safely reach the harbor. In 1853, Captain D.P. Woodbury, Lighthouse Inspector for the Sixth District, requested $1,000 for a lens light of the sixth order, with the necessary fixtures, to be placed on top of the walls of Fort Sumpter [sic]. An octagonal brick tower, surmounted by a cylindrical lantern room, was built atop one of Fort Sumters circular stairwells, to create Fort Sumter Lighthouse, which was placed in operation on May 15, 1856. A fifth-order lens was used in the lantern room to produce a fixed white light at a height of fifty-seven feet around the surrounding water. Mariners could align Fort Sumter Light with Battery Beacon, a sixth-order light exhibited from an iron shaft on the eastern end of Charleston Battery, to cross the bar of the North Channel and sail toward the harbor.

William Holmes was hired as the first keeper of Fort Sumter Light at an annual salary of $400. Holmes died after roughly three years of service and was replaced in March 1859 by George Corlette, who died after less than a year on the job. James Kearney was placed in charge of the light on February 6, 1860 and served until the outbreak of the Civil War.

Fort Sumter was pummeled by Confederate artillery in April 1861 and then reduced to a pile of rubble by Union forces in September 1863 during an unsuccessful attempt to recapture the fort. The brick lighthouse was injured by the Confederate fire and then utterly destroyed by the Union guns. Following the war, a temporary frame structure was erected atop the ruins of Fort Sumter in 1865 to display the light from a lens lantern. The next year, an enclosed, frame tower, topped by a lantern room housing a fifth-order lens, was placed atop the fort. The tower stood twenty-five feet tall and exhibited its light at a height of fifty-one feet.

In 1872, the tower was relocated from the east face of Fort Sumter to the center of its southwest face due to improvements being made to the fort. The tower was moved to the northwest face a decade later, and a 1,500-pound fog bell with striking machinery was set up to complement the light.

In 1893, stone jetties were under construction to improve the harbor, and Swash Channel was deepened, making it the best entrance into Charleston Harbor. During the dredging operation, which included a straight cut across the bar, workers used the lighthouse on Fort Sumter and the steeple of St. Philips Church in Charleston as a range for making the channel. When the work was finished, Fort Sumter Light coupled with a light on St. Philips steeple was the natural choice for range lights to mark Swash Channel. The vestry of St. Philips Church was approached and gave its permission to place a light in its steep in exchange for a yearly rental of $300. Gas pipes were run from the city main to an argand gas-burner placed inside a reflector at a height of 140 feet in the steeple. An electric apparatus at the base of the steeple was used to activate the gas light via wires that ran up to the burner.

The vestry originally granted permission to use their steeple only through December 31, 1894, forcing the Lighthouse Board to develop plans to erect a skeletal tower on the waterfront in Charleston to hold a rear range light. Before the end of 1894, however, the board obtained permission from the vestry to occupy the steeple for two more years, and agreements were worked out after that allowing the continued operation of the light. In 1898, an electric burner replaced the gas burner, but it appears the gas light was soon back in operation, as the Lighthouse Board noted in 1901 that repairs were made to the electric apparatus for lighting the gas-burner in the locomotive headlight, which is used for lighting this beacon in this church tower.

On August 27, 1893, a major hurricane, which came to be known as the Sea Islands Hurricane, struck the coasts of Georgia, South Carolina, and North Carolina, killing more than 1,000 people. The storm surge washed over Fort Sumter, and the resulting damage was reported by the Lighthouse Board:

The keepers dwelling, on the berm of Fort Sumter, was carried away by the storm. The keeper and his family barely escaped with their lives. The force of the storm here overturned the 10-inch barbette guns mounted on the fort, and the coping stones of the parapet were washed away.

Keeper Thomas Britt and his family were trapped on the tiny island during the storm and were not rescued until a few days later. Keeper Britt later recounted the harrowing experience:

We were taken from the fort with the clothes on our backs. Look at me: here is a worn-out suit, and that is all I have to my name. But the worst of all was that we had only a half a bucket of water from Saturday noon until the time we were taken away. This had to do for eight of us, and when I got aboard the Pharos, I felt as if I could drink a whole bucket of water. The fury of the storm might be realized when it its known that two eight-inch Parrot rifles were overturned and buried in the sand. I never want to go through such a thing again. Just imagine life in a powder magazine for thirty-six hours; but we were all glad to be living.

A new dwelling was promptly built for Keeper Britt, who would remain at the light for several more years. The outbreak of the Spanish-American War prompted renewed interest in defending Charleston Harbor, and reconstruction of Fort Sumter began in earnest. As part of this work, a new concrete blockhouse-style installation named Battery Huger was built inside the forts brick walls. The work on the fortifications forced the removal of the lighthouse and fog-bell tower to the rear of the fort, about 300 feet from their former location.

By 1906, the range lights no longer marked the center of the shipping channel, and an iron tower was placed atop piles driven into the seabed 131 feet northeast of the fort and activated as a new front light on August 15, 1906. This light worked in conjunction with the steeple light until July 1915, when St. Philips Church Light was discontinued. At this time, a new Fort Sumter Range Front Light was established on a white, square, pyramidal, skeletal tower three-quarters-of-a-mile from the former front light, and Fort Sumter Range Rear Light was placed on the structure that had served as the former front light.

For a larger map of Fort Sumter Range Lighthouse, click the lighthouse in the above map.