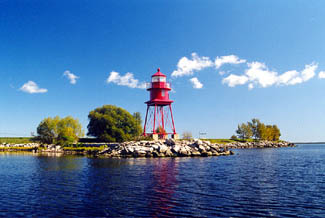 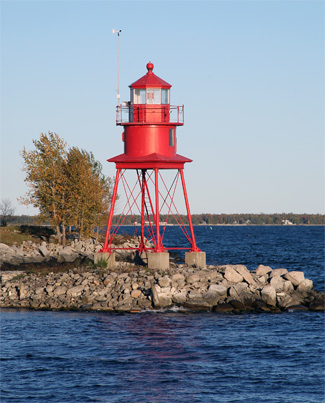 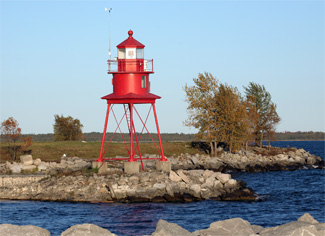 The City of Alpena straddles Thunder Bay River where it empties into the protected waters of Thunder Bay. The seventy-mile-long river with its three main branches drains a good portion of the surrounding country and was a natural conduit for the lumber industry. Alpena started out in the 1840s as a trading post, but after the first steam sawmill was built in 1859, lumber became the driving industry, with shingle mills producing more than ten million shingles annually. The township of Alpena was formed in 1858, and the City of Alpena was incorporated in 1871.

On March 2, 1867, Congress made $10,000 available for building a lighthouse on a proper site at Trowbridge Point, roughly a mile east of the mouth of Thunder Bay River. When the Lighthouse Board submitted an estimate for a lighthouse to guide mariners into Thunder Bay and mark the mouth of Thunder Bay River, it was believed the proper site was Trowbridge Point, but subsequent examination determined the best location would be right at the rivers mouth. At the request of the Lighthouse Board, Congress passed an act on July 20, 1868 allowing a change in the location of the lighthouse.

During 1868, the Alpena Harbor Improvement Company, acting under a charter granted by the State of Michigan in 1865, was at work building timber piers projecting into Thunder Bay in a prolongation of the banks of Thunder Bay River. As the best place for the lighthouse would be at the end of the piers, the Lighthouse Board decided to wait until the project was completed before any steps were taken toward building a lighthouse. The piers were finished in 1869, and while the Lighthouse Board announced that immediate steps would be taken to erect a lighthouse, no action was taken. One likely reason is that the piers were privately owned, and the Alpena Harbor Improvement Company was charging a toll on all vessels and steamboats, drawing over four feet of water, that entered the river.

On June 23, 1874, Congress provided $20,000 for a lighthouse at the mouth of Thunder Bay River provided that all tolls on vessels entering or leaving the river shall be abolished after the light-house is completed. The Lighthouse Board established a temporary light atop a cluster of piles on September 20, 1875, and it appears that around this time the government took control of the river entrance as an act passed on August 14, 1876 provided for the channel to be dredged to a depth of thirteen feet and a width of 200 feet.

Work on a permanent lighthouse began in 1877 with the placement of a forty-five-foot-square crib in line with the existing pier on the north side of the river. An open frame tower, which measured forty-four-and-a-half-feet from its base to the focal plane of its lantern room, was completed atop the crib in July. Starting on August 18, 1877, a fixed red light was exhibited from a sixth-order Fresnel installed in the lantern room of this white tower.

A city lot, measuring 66 by 132 feet and located roughly 1,500 feet from the lighthouse, was purchased in June 1877 for a keepers dwelling. Enoch G. Howard, who had been hired in 1875 to tend the temporary light and had previously worked as a boot and shoe maker, was the first keeper to take up residence in the six-room, frame dwelling. The dwelling was painted white, and a brown barn and white privy were located nearby.

On July 12, 1888, the lighthouse was destroyed in a fire that also claimed the sixth-order lens, lantern room, and all supplies that were stored in the tower. The woodwork of the crib and the bridge that led to the adjoining pier were also burned. The fire started at the H.R. Morse sawmill and claimed around two hundred houses in town along with three million feet of lumber on Gilchrists dock. As the dock collapsed, large burning logs fell into the water and set fire to the lighthouse as they drifted out into the bay. By great exertion, Keeper Howard was able to save his dwelling along with the oil and supplies that were stored there.

A temporary light was exhibited from a mast at a level of twenty-five feet above the lake while a new lighthouse and crib were being built. The second tower stood was eighteen feet square at its base and rose to a height of fifty feet. A lantern room, removed from the abandoned lighthouse at North Point in Milwaukee, was refurbished at the lighthouse depot and placed atop the new Alpena Lighthouse. A fourth-order lens, intended for the lighthouse at Two Harbors, Minnesota, was redirected temporarily to Alpena, where it was placed in operation on October 1, 1888. A sixth-order lens took the place of the fourth-order lens in April 1889.

Wooden stairs led from the crib to the two-story enclosed portion of the tower and then up into the lantern room. In 1890, a 1,500-pound fog bell was cast for use at Alpena and a striking mechanism was purchased and delivered to the depot at Detroit. The bell was attached to the east side of the tower and the associated machinery was installed in the enclosed portion of the lighthouse in time for the fog bell to be sounded for the first time on March 20, 1891. The keeper had to wind up the weight which powered the striking apparatus every two-and-a-half hours when the fog bell was in operation.

A brick oil house fitted with shelves was built thirty feet from the dwelling in 1897. In 1903, the frame bridge linking the crib on which the lighthouse stood to the shore was rebuilt.

Alpena received its third lighthouse in 1914, when a new concrete pier was built to support a black, rectangular, skeletal tower surmounted by a cylindrical watchroom with a diameter of twelve feet and an octagonal lantern. A temporary lens lantern light was exhibited during the construction of the pier and iron lighthouse. The new light, which was first exhibited on June 26, 1914, was produced by an electric incandescent lamp instead of a kerosene lamp. On April 22, 1918, the characteristic of the light was changed from fixed red to a white light that was alternately on for one second and off for one second.

An electric siren replaced the fog bell on June 28, 1902, and the siren was in turn replaced by a compressed air fog signal in 1932. The tower was painted red in 1950.

The fourth-order Fresnel lens, removed from the tower around 1987, is currently located at the Grand Traverse Lighthouse.

In June 2011, Alpena Lighthouse was declared excess to the needs of the United States Coast Guard and made available to eligible organizations under the provisions of the National Historic Lighthouse Preservation Act of 2000. Qualified entities were given sixty days to submit a letter of interest. In August 2013, it was announced that the lighthouse had been awarded to Michigan Lighthouse Conservancy, who also owns the lighthouses at Muskegon. Jeff Shook, president of the non-profit organization, estimates that it will take $60,000 to $80,000 to restore the lighthouse, which is almost certainly covered with led paint. The lighthouse now has an official website, where you can see a webcam view of the harbor.

For a larger map of Alpena Lighthouse, click the lighthouse in the above map.

Where Highway 23 makes a sharp turn in downtown Alpena, take Chisholm Street one block east, turn right on Harbor Drive, then left on Prentiss Street. At the end of Prentiss Street, you can park and take the paved walkway atop the breakwater to get a good view of Alpena Lighthouse.

The lighthouse is owned by Michigan Lighthouse Conservancy. Tower closed.