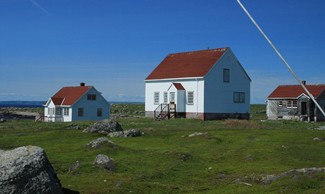 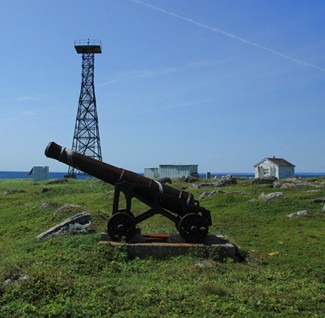 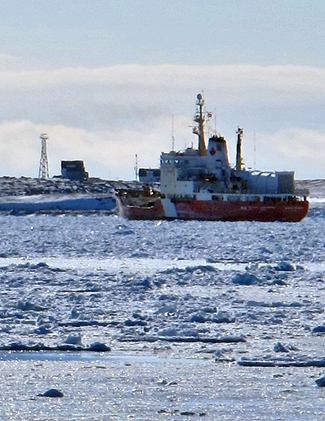 In 1534, French explorer Jacques Cartier landed on an small island in the Strait of Belle Isle and named it Isle de Ouaiseaulx (Island of Birds) on account of the Atlantic puffins and razor-billed auks observed there. The island was later named Greenly Island, but today the more appropriate name would once again be Island of Birds, as it is now part of Brador Bay Migratory Bird Sanctuary. In an 1860 report that provided information on potential lighthouse sites on the Gulf of St. Lawrence and Strait of Belle Isle, John Page, Chief Engineer of the Department of Public Works of the Providence of Canada, wrote the following on Greenly Island:

[It] is on the Labrador side of the entrance of the Gulf through the strait about 13 miles W.S.W. from Point Amour, the present light station, and lies fully one-half mile to the North of a line between the latter and Wood Island. It is low and unproductive and about 2/3 of a mile across, in either direction.

The point fixed upon in the event of a light being established there, is near the S.E. end of the island, on a plateau 50 feet over the level of the sea, where the rock is covered with sand to the depth of 3 feet,  it is about 650 feet west, and 500 feet north of high water lines, and 300 feet from it, in a northerly direction, the surface is fully 30 feet higher, but a light placed so much to the north, as to be on this high ground, would be obscured in an easterly direction by Wood Island.

The island consists wholly of red sandstone, of a close grained texture, lying in blocks of every size and shape, suited for building purposes. Salt water sand of a sharp angular grain is abundant on the spot, and there are numerous large springs of fresh water, on different parts of the island.

Parliament appropriated funds for a lighthouse on Greenly Island in 1875, and two years later, a contract for the work was awarded to James Mowat of Chatham, New Brunswick for the sum of $5,290. The lighthouse was built of wood, painted a fawn colour, and consisted of a seventy-foot-tall octagonal tower incorporated into one end of a rectangular, one-and-a-half-storey keepers dwelling. Louis Couillard de Beaumont was appointed first keeper at Greenly Island, and he placed the light in operation on August 13, 1878. In order to be distinguishable from other lights in the vicinity, the light on Greenly Island was given a unique red-and-white characteristic of half-a-minute of white light, half-a-minute of red light, half-a-minute of white light, and a one-and-a-half-minute eclipse. The lighting apparatus was equipped with nine lamps and completed one revolution every three minutes.

Keeper Beaumont received an annual salary of $400 and was also given an allowance of $200 to hire an assistant to help with the stations fog gun, which was fired every half-hour during fog and snowstorms. In 1882, a thirty-two-pound carronade replaced the smaller nine-pound carronade used as the fog gun on Greenly Island, and that same year, the color of the tower was changed from a fawn colour to white with a red lantern in order to match other towers in the district.

To better serve mariners during periods of limited visibility, a steam foghorn was placed in operation on Greenly Island at the opening of navigation in 1888. The fog alarm building stood 100 yards south of the lighthouse on the southwest part of the island, and its horn sounded a ten-second blast each minute as needed. In 1890, William P. Anderson, Chief Engineer of the Department of Marine, visited the island and recommended that the fog alarm building be relocated as its sound was obstructed to the east by higher land. It took several years, but this recommendation was finally carried out in 1896, when the steam foghorn was moved 900 feet to a point as close to the southern extremity of the island as waves would permit. To help the keepers reach the fog alarm during high winds and when the ground was covered in ice, a 900-foot-long handrail was run between the lighthouse and the fog alarm building.

Water to operate the steam fog signal was obtained from a small lake on the island, but as it could run dry during the summer, a large wooden tank and two iron ones were erected at the station to prevent any shortage of water. In 1905  1906, a modern diaphone fog alarm plant was installed in a new structure on the island.

On July 6, 1906, a sparkling second-order Fresnel lens, procured from Chance Brothers & Co. of Birmingham, England, was placed in operation atop the lighthouse. The lens had eight flash panels and revolved to produce a white flash every two-and-a-half seconds.

Charles Lindbergh made the first solo transatlantic flight in May 1927, flying west to east from Long Island, New York to Paris, France. This wasnt the first transatlantic flight though, as British aviators Alcock and Brown had flown from St. Johns Newfoundland to Ireland in June 1919. The first transatlantic flight from east to west, which is more difficult due to headwinds, wasnt accomplished until April 1928 when Captain Hermann Köhl, accompanied by James Fitzmaurice, a navigator, and Ehrenfried Günther Freiherr von Hünefeld, the owner of the airplane, left Ireland in the Bremen, a German Junkers W 33.

The Bremen was supposed to land at Mitchell Field in New York, but the plane began to leak oil during the flight, and the men decided to head northwest to the nearest land. While flying through a blizzard, the curtain of snow suddenly lifted revealing what appeared to be a ship of the Newfoundland sealing fleet frozen in the ice below them. As they flew lower, it became clear that it wasnt a ship but a lighthouse, and the men decided to set their plane down there. After thirty-six-and-a-half hours of flight, the Bremen returned to earth on a small pond near Greenly Island Lighthouse.

The surprise of the Bremens arrival almost paralyzed us, said Jacques Letemplier, keeper of the lighthouse. We did not know the flyers were crossing the Atlantic and even if we had, Greenly Island was the last spot in the world for an airplane to pick for a landing. The place does not have room enough for a good cock-fight but the aviators were glad to get their killock [anchor] down here.

The telegraph station at nearby Blanc Sablon was used to broadcast a report of the successful east-west transatlantic crossing, and the news soon spread throughout the world. At first, it was thought that the Bremen could be quickly repaired and flown on to New York, but when this proved not to be the case, the men were flown to the states where they were given a ticker-tape parade in New York City on April 30. Two days later, the men met with President Calvin Coolidge at the White House where they received the Distinguished Flying Cross, the first foreigners to ever be given the award.

The Bremen was badly damaged trying to take off from a short runway at Blanc Slabon, and later, it was transported by ship to Quebec City. From there, it was sent to Germany on September 17, 1928, but just a few months later, it sailed for New York on May 10, 1929. Henry Ford later acquired the Bremen and placed it on display at the Henry Ford Museum in Michigan. Still owned by the museum, the Bremen is currently on display at the terminal building at Bremen Airport in Germany.

On August 14, 1928, a monument was dedicated to the heroes of the first east-west transatlantic crossing. The inscription on the monument reads: On this island landed the Bremen, Friday April 13, 1928, after the first east-west non-stop flight, having left Ireland at dawn, Thursday April 12, 1928. Members of its crew were: Baron Ehrenfreid Guenther Von Huenefeld of Germany, Captain Hermann Koehl of Germany, and Major James C. Fitzmaurice of Ireland. Erected by Clarke Steamship Co. Ltd. of Montreal, Quebec in recognition of a very gallant feat.

Keeper Jacques Letemplier and his brother built the cairn for the monument using granite boulders gathered from the islands pond.

Greenly Island Lighthouse was destroyed by fire in 1947, necessitating the construction of new facilities that consisted of a very high-powered electric revolving optic mounted atop a steel lighthouse tower with dwellings and a powerhouse located nearby.

Another metal tower was erected on the island in 1983, when the station was automated, and its last keeper left. While the island is part of Brador Bay Migratory Bird Sanctuary, the stations buildings are owned by the municipality of Blanc-Sablon.

For a larger map of Île Greenly Lighthouse, click the lighthouse in the above map.

A distant view of the island and light can be seen from Loudres de Blanc Sablon, but a better view would come from the water.


A replica of the Bremen, the German Junkers monoplane that landed on Greenly Island in 1928 at the end of the first east-to-west transatlantic flight, can be seen at the airport in Blanc Sablon.