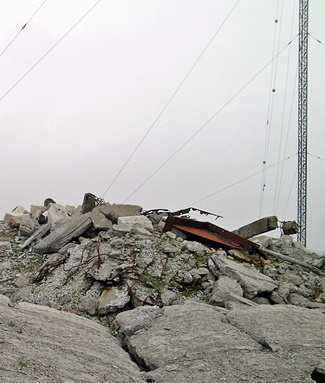 Anticosti Island, situated at the confluence of the St. Lawrence River and the Gulf of St. Lawrence, is 217 kilometres long and 48 kilometres wide at its widest spot. Though the island is larger than Prince Edward Island, its population numbers just a couple hundred inhabitants. Mariners can sail past the island by taking Jacques Cartier Strait, which separates the island from the Côte-Nord region of Quebec, or choosing Honguedo Strait, which runs between the south side of the island and the Gaspé Peninsula.

When Captain Henry Bayfield of the Royal Navy was asked in 1829 to recommend sites for lighthouses to improve navigation of the St. Lawrence, he remarked a light on the east end of Anticosti would be extremely valuable, as it would enable vessels bound up to pass to the northward of Anticosti, and thereby avoid the current constantly down the river on the South side of the island. Captain Bayfield felt the north channel offered more regular tides and better anchorage than the south channel, but it was the south channel that was first marked by lighthouses.

Anticosti Islands first lighthouse was established at Southwest Point on the islands southern shore in 1831, and that year a sum not exceeding £6,412 was appropriated for a lighthouse on Pointe Heath, the islands southeast point. Trinity House of Quebec engaged Pierre Chateauvert in April 1832 to build the tower by August 15, 1834 for £4,025. Mr. Brown, an able architect, was hired to superintend the construction, and he sailed to Anticosti Island in early June 1832, but owing to mismanagement of the workmen and issues in delivering materials, the tower stood only twenty-six feet tall when work for that first season was discontinued in early September.

A lantern and lighting apparatus for the lighthouse were ordered from England and shipped to Quebec in the spring of 1833. The fourth story of the tower was completed in July 1834, but when work stopped for the season on October 10, the arch and pedestal for the lantern room were still lacking. Two men were hired to watch over the incomplete lighthouse during the winter of 1834  1835, and an additional £677 was requested for completing the tower during the summer of 1835.

Pointe Heath Lighthouse was built of grey limestone, and its circular lower stories doubled as a living quarters for Barney Bradley, who served as its first keeper. The tower stood ninety feet tall, and tapered from a diameter of thirty-five feet at its base to twenty-six feet at the gallery that encircled the lantern room, which had a diameter of thirteen feet. In 1861 an array of seventeen lamps and reflectors was being used in the lantern room to produce a fixed white light at a focal plane of 110 feet above the gulf. Roughly 400 gallons of porpoise and seal oil were being consumed in the lighthouse each season when the station was converted to kerosene in 1865.

Charles Julyan replaced Thomas Roche as head keeper of Pointe Heath Lighthouse in 1854 and served in that capacity for nearly a decade before living conditions in the stone tower forced him to resign. In the fall of 1862, Keeper Julyan penned the following to his superior:

I have suffered so much from the severity of the climate during these last two years  especially in the spring when the cold damp Easterly winds are so prevalent that I fear I shall be under the necessity of resigning the charge of the Heath Point Light House in the course of another year or two  and therefore I am anxious to complete the necessary preparation for the removal of my family as soon as possible  which is the only object I have in view in now applying for leave of absence next season.

In case mariners became shipwrecked near Pointe Heath Lighthouse, a supply of fifteen barrels of flour, seven barrels of pork, and eight barrels of peas were kept in a depot on the point so the keepers provisions would not be exhausted. A dwelling house for shipwrecked mariners was built near the lighthouse in 1869. During the late summer and fall of 1873, five men from the Confredrique and seven men aboard the Alexina subsisted on the depots provisions after their vessels wrecked at Fox Bay. In addition, new settlers at Fox Bay ran out of supplies that winter and had to receive assistance from the supply depot at Pointe Heath.

Thomas Gagné, who served as keeper from 1868 to 1890, was furnished a horse to draw his fuel, water, and supplies, but in 1871, the inspector noted that the horse was baulky and would not work at ploughing. Keeper Gagné felt that if he had a horse that would plough he would be able to cultivate enough hay and vegetables at the station for his needs.

A fog gun, which was fired every thirty minutes, was established at Pointe Heath on October 3, 1881. On September 7, 1891, twenty-two-year-old Arthur Lemire, who had been serving as an assistant at the station for two years, loaded the fog gun at 4:30 p.m., and after it failed to go off after he pulled two friction tubes, he stepped out of the gun house to investigate. While Lemire was driving the charge further home, the gun went off, blowing him over the bank and onto the beach below, a distance of about fifteen feet. Lemires right hand, which held the rammer, was lacerated, and the adjoining forearm was broken and contused.

Keeper Gagné wired news of the accident to the Department of Marine and received separate replies from the Minister and his deputy  one saying the steamer La Canadienne had been dispatched to help and the other saying to send Lemire to Gaspé by schooner. As Lemire didnt seem to be too hurt, the keepers waited for the steamer to arrive, but when it hadnt arrived after three days, Lemire was placed aboard the schooner Annie McGie. The schooner arrived at Gaspé on the evening of September 11, but Lemire died the following morning. La Canadienne didnt arrive at Pointe Heath until the fifteenth.

When mariners complained of the long period between firings of the fog gun, cotton powder cartridges began to be fired every twenty minutes at the station in 1894. This new type of fog signal was exploded from a derrick mounted atop the gun shed and gave loud reports, sharper than those from pieces of ordnance. The time between firings of the fog signal was reduced to fifteen minutes on July 1, 1901, and after this date, when a vessels fog signal was heard in the vicinity, firings were made at intervals of every five minutes until the vessel passed the station.

To improve navigational aids in the area, a lightship was anchored eight miles southeast of Pointe Heath Lighthouse in July 1904. This vessel was a steel steamer built by Polson Iron Works of Toronto for $89,975, and it had three electric lanterns atop each of its two masts. Its hull was painted red with the word Anticosti stenciled on each of its sides in white, and a diaphone foghorn, operated by compressed air, gave a four-and-a-half-second blast each minute to assist mariners during periods of limited visibility.

During the 1907 navigation season, the Steel Concrete Company of Montreal added a reinforced concrete extension to Pointe Heath Lighthouse in preparation for the installation of a new lantern room and first-order, bivalve, Fresnel lens, manufactured by Barbier, Benard & Turenne of Paris. After the extension was completed, a heavy storm damaged the sheathing on the lower portion of the tower, which necessitated resheathing and repainting the tower. The tower was further strengthened at this time by fastening the concrete and stone portions of the tower together by iron hoops. The contract for heightening the tower was $6,095, while the additional work of sheathing and strengthening the tower cost $2,350.

The new lens was to be placed in operation during the 1907 season, but due to the lack of a way of transporting it to the island that year, the lens was not installed until 1908. The giant lens revolved to produce a brilliant flash every seven-and-a-half seconds atop the heightened tower, which now measured 133 feet from its base to the top of the ventilator on the lantern room.

A new detached dwelling was erected for the keeper in 1916. In 1927, a new steam fog whistle was installed in the lightship of Pointe Heath, and the fog signal on the point was discontinued. The lightship was withdrawn in 1932, and a radiobeacon was established on Pointe Heath to replace the one that had been operating from the lightship.

A square, skeletal tower was erected on Pointe Heath in 1965 to display the light, and the old stone and concrete lighthouse was subsequently demolished. Pointe Heath Light was automated in 1973 and then discontinued in 2002. The skeletal tower was removed in 2003, but a white aerobeacon on a 123-metre-tall communications tower continued to mark the point for some time.

For a larger map of Pointe Heath Lighthouse, click the lighthouse in the above map.

Pointe Heath is best seen from the water as the point is part of Pointe Heath Ecological Reserve.


Though life at Pointe Heath must have been isolated, Christophe and Joséphine Hubert and their family sure seem to be dressed in the latest styles.