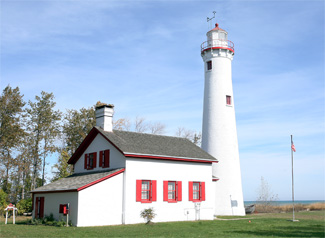 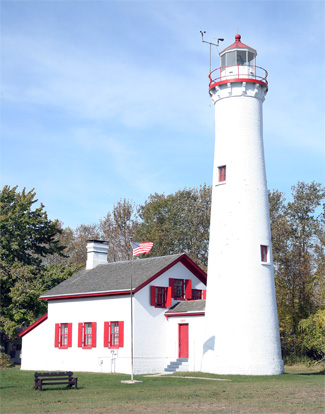 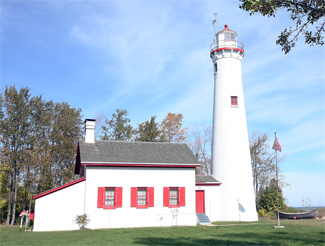 A lighthouse was built on Tawas Point, near the northern entrance of Saginaw Bay, in 1857, and one was erected on Thunder Bay Island in 1832, but these lights were unable to fully illuminate the roughly fifty-five-mile gap between them. In 1866, the Lighthouse Board proposed that a lighthouse be erected near the midpoint of this gap.

Sturgeon Point is about half way between Point au Sable, the north cape of Saginaw bay, and Thunder Bay Island light-house; is somewhat out of the track of the general commerce of the lake, but vessels frequently, from various causes, get out of the direct course, and a light-house at this point would enable them to take a new departure and shorten the long stretch across the mouth of Saginaw bay. To build a light-house at this place an appropriation of fifteen thousand dollars is recommended.

Congress appropriated the requested $15,000 on March 2, 1867, and efforts began to secure a title to the desired parcel on Sturgeon Point. Plans for the lighthouse were approved July 6, 1868, and after a deed for just over sixty acres on the point was formalized on September 22, 1868, work commenced the following spring. Excavation for the lighthouse was made at a location roughly 100 feet from the shoreline, and a limestone block foundation, which is seven-and-a-half feet high and extends four feet above the surface of the ground, was laid for a conical tower with attached keepers dwelling.

The circular brick tower gently tapers from a diameter of sixteen feet at its base to ten feet at the lantern room gallery, while its walls decrease from a thickness of four-and-a-half feet to eighteen inches over the same distance. The tower stands seventy-feet, nine inches tall, and its decagonal, cast-iron lantern room, which came from a lighthouse in Oswego, New York, is reached by a spiral stairway with three landings that winds up the tower. Four windows, one facing each of the cardinal points of a compass, provide light for the towers interior. A third-and-a-half-order, Henry-Lepaute Fresnel lens was mounted atop a cast-iron pedestal in the lantern room to produce a fixed white light that could be seen for up to fifteen miles.

An eleven-foot-long covered passageway connects the tower to the two-story, brick dwelling, which had eight rooms for the keeper and his family. An iron door was installed at the entrance to the tower from the passageway to prevent fire from spreading between the tower and dwelling, both of which were painted white.

The lighthouse was completed in early November 1870, and its light was scheduled to be exhibited that month. However, Perley Silverthorn, the first keeper, was late in arriving to the lighthouse, and it was decided to postpone the inaugural lighting until the opening of navigation the following spring.

Noah T. Farr replaced Silverthorn as keeper of the lighthouse and served for nearly three years before resigning. John Pasque took charge of the lighthouse in 1876, and the following year had a close brush with death as described in a local newspaper on September 14, 1877:

Last Wednesday, John Pasque, lightkeeper at Sturgeon Point, tried to shoot off his rifle, but the cartridge was no go. He took said cartridge from the gun, and employing the expeller endeavored to remove the cap from the shell, and just then there was a change in the appearance of things. The cartridge exploded in his hand; the ball considerably shattered several of his fingers, and, passing through his vest and shirt, struck one of his left ribs, producing a slight flesh wound. It was a miraculous escape of death for John, to say the least.

On August 28, 1880, the side-wheel steamer Marine City was making its way from Mackinaw to Detroit with 160 people on board, when it caught fire off Sturgeon Point. As smoke and flames were emanating from the upper deck near the steamers smokestack, passengers frantically gathered on either side of the main deck. The tugs Vulcan and Grayling were fortunately within sight and rushed to the aid of the burning steamer along with the Sturgeon Point lifesaving crew, under the direction of Keeper Silverthron, and Keeper Pasque. Thomas Hackett, captain of the Vulcan and responsible for saving most of the passengers, was born at Bois Blanc Lighthouse, where his father was lighthouse keeper. Twenty people, many of whom panicked and jumped from the burning steamer before help arrived, perished in the accident. The rudder salvaged from the wreckage of the Marine City is now on display at Sturgeon Point Lighthouse.

In 1885, five cribs were built and positioned radially along the shoreline, as the lake had crept to within forty feet of the tower and was coming nearer with every storm. Each wooden crib was eight feet wide, five feet deep, roughly sixty feet long, and was filled with stone and gravel. A fifty-six-foot-long breakwater was also constructed, using logs found on the shore, to prevent the stations stable from being swept into the lake. By the following year, the accretion of material between the cribs was considerable. Two additional cribs were put in place a few years later.

The towers Fresnel lens was somehow damaged in 1887. A news lens was installed in the tower, and the old lens was shipped to the general lighthouse depot on Staten Island for repair. Whether or not the original third-and-a-half-order, Henry-Lepaute lens was ever returned to the lighthouse, it is known that a lens of that description was in the lantern room in 1910 and remains there today.

A force-pump, with 150 feet or iron pipe linking it to the lake, was installed in 1890 to provide water for the dwelling. In 1893, a brick-lined circular iron oil house, with a capacity of seventy-two, five-gallon oil cans was built 100 feet south of the lighthouse. Also that year, a brick cistern was added beneath the dwellings living room, and the conductor pipes from the residence were redirected to feed the cistern. In 1910, a flowing well with a depth of 160 feet was providing excellent water to the keeper and his family.

On April 15, 1913, the characteristic of the light was changed from fixed white to a white flash every three seconds through the introduction of an automated acetylene lighting apparatus. Louis Cardy was hired as keeper of the lighthouse in 1882, when John Pasque left to become head keeper of the just completed Stannard Rock Lighthouse, and he served at Sturgeon Point for thirty-two years until his passing in November 1913 at the age of eighty-one. With Sturgeon Point Lighthouse now automated, a new keeper was not appointed. Rather, the coastguardsmen at the adjacent station were assigned to keep an eye on the light.

The lighthouse tender Amaranth was placing buoys to help mark a reef off Sturgeon Point when it went hard aground on May 31, 1913 in foggy conditions. The lifesaving crew from the point went out to assist the vessel, and a tug from Alpena was dispatched to help release the tender from the reef.

Sturgeon Point Lighthouse had fallen into serious disrepair by the time the Alcona Historical Society obtained a lease on the property in 1982. The stations buildings were restored as part of a three-year volunteer project, and they are now run as a maritime museum and historical site. Under the provisions of the National Historic Lighthouse Preservation Act of 2000, Sturgeon Point Lighthouse was awarded to the Michigan Department of Natural Resources in 2005, but the property is managed and interpreted by the Alcona Historical Society.

For a larger map of Sturgeon Point Lighthouse, click the lighthouse in the above map.

If you are coming from Alpena, turn left onto Alcona Road from Highway 23, and follow it for 1.1 miles to Lakeshore Lake. Follow Lakeshore Drive for 3.2 miles and turn left on Point Road. Sturgeon Point Lighthouse is about a mile down Point Road on the left hand side.

The keeper's house, which is now a maritime museum, and the tower are open to the public during the summer. For hours, click here. The grounds are open all year.

The lighthouse is owned by Michigan Department of Natural Resources and Alcona Historical Society. Grounds open, dwelling/tower open in season.