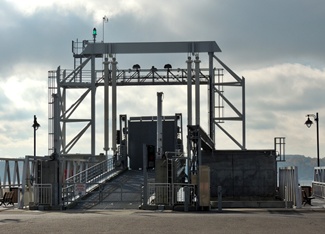 In 1828, a special committee, which was appointed by the House of Assembly of Lower Canada to determine if lighthouses should be established on the Pillars, the Islands of Belle Chase, Point Saint Laurent on Île-dOrléans, or other places below Quebec, asked Captain Bayfield of the Royal Navy his opinion on the matter, and he replied, It is perfectly ridiculous to establish a Light on Bellechasse Island, but a small Light on the end of Pointe Saint Laurent would be useful, as it would enable vessels to run through in the night between it and the Beaumont shoals. A lighthouse was established on Stone Pillar in 1843 and on Bellechasse Island in 1862, but it wasnt until 1864 that arrangements were made for the construction of a pier and lighthouse at Pointe Saint-Laurent. A detached pier, which measured 128 feet long, 34 feet wide, and towered 27 feet above the river, was nearly completed in the fall of 1865, but ice floes the following spring damaged the structure. Large fields of ice surrounded the pier, and at each tide, continuous and enormous pressure would be exerted against the pier. After the pier was strengthened, the pier and lighthouse were turned over to the Department of Marine in March 1869.

Pointe Saint Laurent Lighthouse was a square, wooden tower that stood forty feet tall and tapered from being sixteen-and-a-half-feet square at its base to twelve-feet square just below its iron lantern. Five mammoth flat-wick lamps and an equal number of eighteen-inch reflectors were used in the lantern room to produce a fixed white light. Joseph Chabot, the first keeper of the lighthouse, lived in the lighthouse for its first eleven seasons of operation before being superannuated and replaced by Edouard Chabot in 1880.

On May 12, 1890, a lens of a small size was installed in the lantern room, replacing the old catoptric lighting apparatus.

The government wharf at Saint-Laurent was lengthened seventy feet in 1902, and on the opening of navigation in 1903 the light that was previously shown from the square lighthouse was transferred to a lantern room of a freight shed that had been moved onto the extension. The freight shed was a rectangular, wooden dwelling that stood over the slip in the centre of the outer end of the wharf, and it was painted pink with a moss-green roof. The octagonal, metal lantern that housed the light was painted white with a green roof, and the light was exhibited at a height of thirty-three feet above high water mark.

During proceedings in February 1905, a member of the House of Commons asked, Is the government aware that one Joachim Godbout, a lighthouse-keeper, in the employ of the government at St. Laurent, Island of Orleans, took an active part in the last federal election, to the degree of insulting publicly in public meetings the opposition candidate and his friends? Raymond Prefontaine, the Minister of Marine and Fisheries replied that he was not aware of this charge and acknowledged that it was not the policy of the government to tolerate politicking by its employees. The charges may have been unfounded, as Keeper Godbout, who had just been appointed the previous year, remained in charge of Saint-Laurent Lighthouse until 1911.

In 1914, a two-section, steel, skeletal tower, equipped with an octagonal iron lantern and a fourth-order dioptric lens, was erected on the wharf to replace the light displayed from the freight shed.

Around 2011, a ferry dock was constructed at Saint-Laurent wharf to provide essential transportation and mobility needs in the event of an emergency on the island. As part of this work, the light at Saint-Laurent was moved from a square, skeletal tower to a short pole mounted atop the ferry dock.

For a larger map of Saint-Laurent Lighthouse, click the lighthouse in the above map.

From Chemin Royal (QC-138) at Saint-Laurent on the southern side of Île-d'Orléans, turn toward the river on Chemin du Quai and continue to the end, where you will see the light atop the landing.