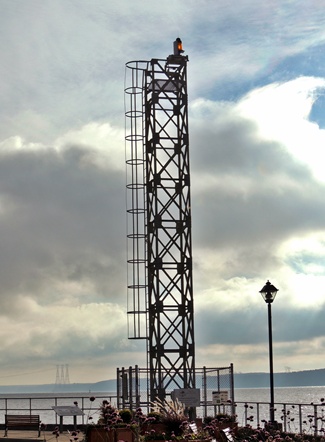 Sainte-Pétronille is situated on the southwest tip of Île de Orleans, facing Quebec City. In 1759, General James Wolfe set up his headquarters at Sainte-Pétronille so he could monitor Quebec City and the navigation channels that passed down either side of Île de Orleans. After Wolfes victory at the Battle of the Plains of Abraham, Île de Orleans became home to many well-to-do English colonists who were attracted by the islands renowned microclimate and romantic landscapes. North Americas first golf course, a three-hole affair, was built in 1868 at Sainte-Pétronille, which was linked to Quebec City by ferry. The community is named after Saint Petronilla, who was reportedly cured of palsy by Saint Peter before she was martyred at the end of the first century. In 1901, the Department of Marine noted that the long promised light at the west end of the island of Orleans had been established in the form of an occulting Pintsch gas light. The lighthouse, which consisted of a thirty-four-foot-tall, square, wooden tower, painted white with a red lantern, stood on the rocky La Pointe de LAnse du Fort, about 600 metres from Sainte-Pétronille Church.

Napoleon Ferland served as the first keeper of Sainte-Pétronille Lighthouse, earning an annual salary of $150.

In 1903, the colour of the light was changed from green to white, and in 1906, a fourth-order lens with an occulting screen operated by clockwork was installed in the lantern room. This lighting apparatus was manufactured by Chance Bros. & Co. of Birmingham, England, and it produced a light that was alternately visible for five seconds and then eclipsed for three.

Fire destroyed the original Sainte-Pétronille Lighthouse in 1934, and a replacement light was established on the nearby government wharf in the form of a pole light mounted atop a freight shed. This light had a focal plane of thirty-three feet and exhibited two flashes every seven seconds in this manner: two-second flash, half-second eclipse, two-second flash, two-and-a-half-second flash. In 1954, a forty-five-foot-tall, white, wooden pole topped by a red lantern was mounted on the outer end of the wharf to exhibit the light at a height of forty-nine feet.

When the wharf was demolished in 1983, the light was moved to a skeletal tower adjacent to the nearby hotel. This hotel, known originally as Château Bel-Air, then Manoir de lAnse, and finally Auberge La Goéliche, burned in 1996, but reopened in 1997 after being rebuilt.

For a larger map of Sainte-Pétronille Lighthouse, click the lighthouse in the above map.

From Chemin du Bout-de-l'Île (QC-368) in Sainte-Pétronille, turn toward the water on Rue du Quai and continue to the end where you will find the light.