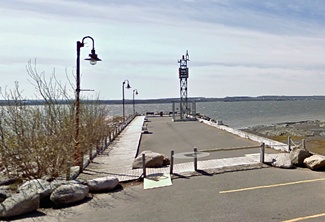 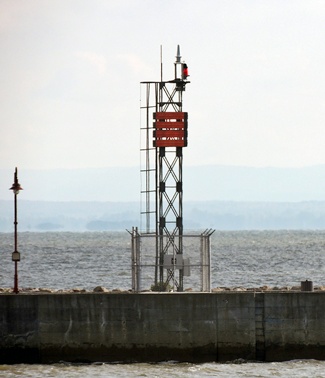 Saint-Jean-de-lÎle-dOrléans is situated on the southeast shore of Île dOrléans and at one time was known for being home to river pilots, who would guide vessels through the treacherous St. Lawrence navigation channel. The settlement, whose motto is the land and sea have shaped it, is also known for its agriculture with potatoes and strawberries being some of the principal crops.

A lighthouse was erected on the wharf at Saint-Jean in 1873 and placed in operation on May 1, 1874. The square, wooden tower stood twenty-three feet tall, cost $3,112, and displayed a white flash every thirty seconds from a revolving, catoptric lighting apparatus made up of two lamps set in twenty-one-inch reflectors. During its first year of operation, the tower was equipped with a lightning conductor and was raised four feet to protect it from ice floes. In the fall of 1875, storms caused significant damage to the wharf, jeopardizing the lighthouse and causing the Department of Marine to help repair the landing to protect the navigational aid.

Twenty-one-year-old Charles Langlois was appointed keeper of the light in 1875 at an annual salary of $300, and he looked after the light until 1896. The lighthouse doubled as a dwelling for the keeper, and an oil house was built nearby on the wharf in 1876.

On January 11, 1877, William Barbour, Inspecting Engineer for the Department of Marine at Quebec, reported on a visit to Saint-Jean Lighthouse to his superior: In conformity with your orders, I went down to St. Johns Light, took the revolving gear down, and sent it up to Mr. E Chanteloup, Montreal. This gear has never worked well, and will require to be thoroughly overhauled and put in good working order, so as to make one full revolution every minute, and a flash every thirty seconds. On March 5, 1877, Barbour returned to Saint-Jean to install and regulate the revolving gear, which was found to now function in first-class order.

In 1908, the light at Saint-Jean was moved to a square, wooden, lantern room built atop the new freight shed at the outer end of the recently extended wharf. In its new position, the light was thirty-four feet above high-water mark and was visible for eleven miles from all points of approach by water. This new lighthouse was described as a red, square, wooden, lantern on the brown, hip roof of a rectangular, yellow building.

A skeletal tower replaced the light atop the freight shed in 1969.

For a larger map of Saint-Jean-d'Orléans Lighthouse, click the lighthouse in the above map.

Take Chemin Royal (QC-368) to Saint-Jean-de-lÎle-dOrléans and then turn toward the water on Chemin du Quai to reach the light.