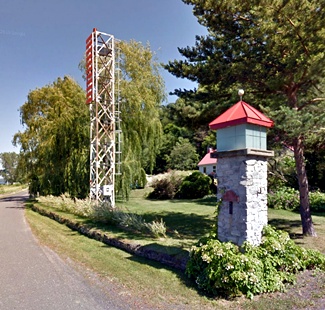 Sainte-Croix (Holy Cross) is located on the southern shore of the St. Lawrence, thirty-eight kilometres upstream from Quebec City and directly opposite the mouth of the Jacques Cartier River. On January 16, 1637, a seigneurie that included present day Sainte-Croix was awarded to the Ursuline Sisters, and on September 14, 1647, the Feast of the Exaltation of the Holy Cross, Father Jerome Lalemant changed the name of the seigneurie from Platon to Sainte-Croix. In 1842, a wooden tower was erected near the high water mark, a half-mile north of the church at Sainte-Croix, to assist mariners in keeping in the channel for some distance up and down the St. Lawrence River, and James Thurber was hired as its keeper. The following description of the lighthouse was given in 1878:

The government paid Mr. C. Durocher a yearly rent of six dollars for a strip of land adjoining the lighthouse according to an agreement dated September 24, 1863 in which Duroucher relinquished all claims to the lot upon which the lighthouse was erected.

On September 14, 1878, seventy-one-year-old Keeper James Thurber submitted his letter of resignation due to poor health:

I have the honour to inform you that I am forced to resign my position as lighthouse keeper in the Parish of Ste. Croix, in the County of Lotbiniere, which I have held ever since 1842. You would do me a great favour, and, I believe, would do me justice, by appointing in my stead my son, John Thurber, who has all the necessary qualifications for the position. I have always paid the percentage required by your Department to entitle me to superannuation, and I feel sure that my two requests, viz., my sons appointment and the granting of my pension will meet with no obstacle.

William Thurber was appointed keeper at an annual salary of $175 in place of his father in 1878, but for some reason James Thurber didnt receive a pension. His failure to receive a pension was still being debated in Parliament in 1891, when James would have been eighty-four. Its doubtful whether he ever did receive his pension, as he passed away in 1893.

During the spring of 1897, ice dislodged the lighthouse from its foundation, and Keeper Thurber was unable to live in the tower for several months. The lower storey was crushed in, and the braces and floors were strained and broken. On its northeast side, the tower was open its whole length, and the three big posts that were its main support were broken. Rooms were rented for the keeper while carpenters from Quebec made temporary repairs to the lighthouse.

In 1899, a pair of range lights were established at Sainte-Croix, one-and-a-quarter-mile east of Sainte-Croix Lighthouse, as an additional aid to mariners:

Range lights to mark the centre of the dredged cut through the Ste. Croix bar in the ship channel between Montreal and Quebec were established during the past season. Temporary lights were maintained during the erection of the tower, which were put in operation on October 4.

The front tower is 23 feet high from its base to the top of the ventilator, and shows a fixed white light elevated 186 feet above high water in and over a small arc on each side of the axis of the dredged cut through Ste. Croix bar. It also shows down stream on its north-eastern face. The illuminating apparatus is catoptric.

The back tower stands 1,400 feet S. E. ¼ E. from the front tower, is 54 feet in height from its base to top of the ventilator, and is painted white. From an elevation of 238 feet above low water mark it shows a fixed white light in the line of range, the illuminating apparatus being catoptric.

When the dredging of the bar is completed to the full width of 500 feet the range will be shifted to the centre of the finished cut.

These towers were erected by the department, under the supervision of Mr. C. Auger, at a cost of $1,667.62.

A. Frenette was hired as keeper of the front range light, while William D. Racette was employed to care for the rear range light. The Thurber family continued to look after the main light, with William serving until his death in 1901. Hermine Thurber took charge of the light upon her husbands death and served until 1906, when William A. Thurber was appointed keeper of the light.

In 1909, the main light was improved by the installation of a fourth-order lens in placed of the lamps and reflectors previously used. The illuminant for the new lamp was petroleum vapour, burned under an incandescent mantle.

For a larger map of Sainte-Croix Lighthouse, click the lighthouse in the above map.

From QC-132 in Sainte-Croix, turn north on Rue du Bateau and continue to the river where you will find Sainte-Croix Lighthouse.

The tower is owned by the Canadian Coast Guard. Grounds/tower closed.