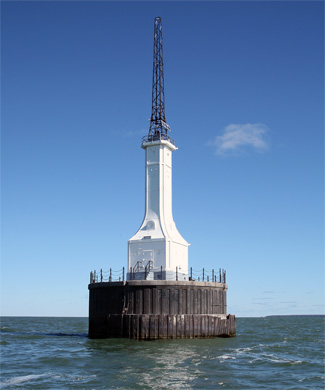 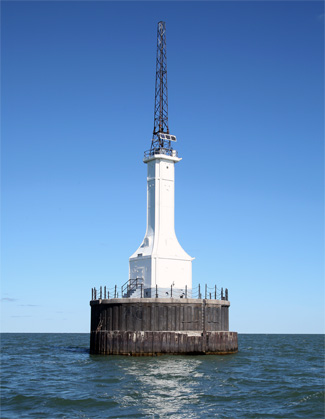 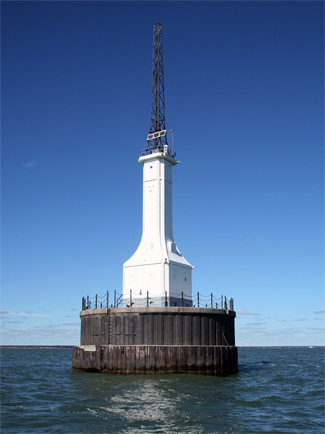 During the 1920s, Gravelly Point Shoal Gas and Bell Buoy was anchored in twenty-four feet of water near the end of the shoal and displayed an occulting red light to warn ships of the hidden threat. In 1928, the effectiveness of the buoy was improved by changing its illuminant to acetylene and by moving it to the extreme edge of the shoal. Still, this aid was considered insufficient when there was a revival of shipping in Saginaw Bay in 1930. During the 1929 season the net tonnage handled by vessels entering the Saginaw River was 16,714, but by the following year the tonnage had increased more than six fold to 1,110,471. The channels in the Saginaw River had been improved so that deep-draft vessels of full lake size were now able to navigate the river as far as the outskirts of Saginaw City.

In 1931, George R. Putnam , Commissioner of Lighthouses, revealed the following in his annual report:

Many requests have been received from shipping interests for the establishment of a lightship or a light station at the entrance to Saginaw Bay. In entering this bay from Lake Huron it is necessary to clear the shoals off Charity Island on the north, Charity Island west shoal to the eastward of the entering vessel, and Gravelly Point Shoal to the westward. The latter shoal projects well out off Lookout Point and is particularly a menace to vessels. The weather conditions in the locality are inclined to be hazy, and there are few distinguishing marks along the shore. Navigation, both in entering and leaving the bay, is difficult with the existing aids.

While the requests had been received for many years, the recent increase in marine traffic led Putnam to decide that immediate action was imperative. Putnam proposed that a first-class modern light and fog-signal station with radiobeacon be established to mark the entrance to the bay at a projected cost of $188,000.

In 1938, it was announced that the new permanent light structure would be built on Gravelly Shoal and that it would be funded by the Public Works Administration (PWA), an agency set up to the help the countrys economy recover following the Great Depression. The Lighthouse Service received $2,098,750 from the PWA for projects in twenty-eight states. Work on Gravelly Shoal Lighthouse began in 1938, and the structure was completed during the fall of 1941 at a cost of roughly $175,000. The modern navigational aid was placed in commission at the opening of navigation in 1942 and was controlled remotely from Tawas Lighthouse.

The following description of the lighthouse was including in the 1941 Annual Report of the Lake Carriers Association:

The Gravelly Shoal Light Station, at the entrance to Saginaw Bay, was built in 24 feet of water, and its remote control equipment bears considerable resemblance to Lake St. Clair station. Its control point is at Tawas City, approximately 18 miles away. This structure is built on the end of Gravelly Shoal. The foundation is a rock-filled cylindrical caisson constructed of interlocking steel sheet piling. This caisson is capped with a concrete deck, above which rises a 50 foot light tower.

The light tower, of the fully enclosed type, was built of steel plates, in sections. Each unit was prefabricated ashore, transported to the lighthouse site and placed in position. This method not only made for economy in construction, but provides a ready means for increasing the height of the tower should this become desirable at a later date. The lighting apparatus at the Saginaw Bay station consists of a 375 millimeter lens with an electric incandescent light. There is also a radiobeacon, of the marker class, having moderate but sufficient power, as its signals are only for use within Saginaw Bay.

The lighthouse constitutes an important improvement in the marking of Saginaw Bay Channel, for it stands on a shoal at a turning point in the channel, sufficiently far from shore to make navigation by bearings on objects upon the land of doubtful value.

The Art Deco tower design used at Gravelly Shoal had been employed earlier at Conneaut and Huron Harbor, Ohio, Indiana Harbor, Indiana, and Port Washington, Wisconsin. The steel tower was fabricated by Wickes Boiler Company of Saginaw for $24,000, while John C. Meager of Bay City was awarded the contract for constructing the foundation and installing the tower.

In May 2014, Gravelly Shoal Lighthouse, deemed excess by the Coast Guard, was made available under the guidelines of the National Historic Lighthouse Preservation Act to eligible entities defined as Federal Agencies, state and local agencies, non-profit corporations, educational agencies, or community development organizations, for education, park, recreation, cultural, or historic preservation purposes. When a qualified owner was not found, an online auction for the lighthouse was initiated on June 30, 2015. Four bidders participated in the auction, which ended on August 30 with a high bid of just $16,000. The government has the right to reject the winning bid if it feels the lighthouse is worth markedly more money, but the lighthouse is likely to be awarded to the highest bidder.

When the high bidder failed to close on the lighthouse, the General Services Administration offered the lighthouse to the second-highest bidder, who turned out to be Bill Collins. Collins already owned Manistique Lighthouse and Ile Aux Galets Lighthouse in Michigan and Liston Rear Range Lighthouse in Delaware, but he felt he was up to the task of rehabilitating another structure. Collins penchant for fixing things up runs deep - he owns two autobody shops in northeast Ohio and has a large collection of classic cars.

For a larger map of Gravelly Shoal Lighthouse, click the lighthouse in the above map.

The best place to view this light from the shore is at the tip of the peninsula six miles east of Au Grey. The ferry service to Charity Island provides the opportunity for a closer view of the tower.