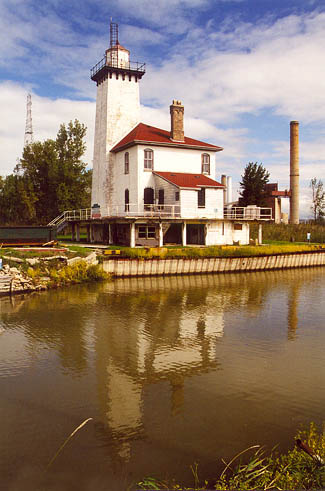 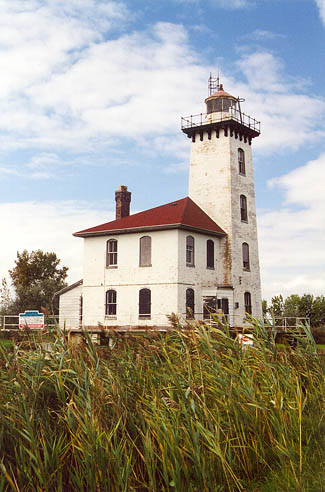 Expansive Saginaw Bay lies between Michigans thumb and the rest of the states Lower Peninsula. As Michigan was preparing to become a state, it adopted a constitution in 1835 that made it the duty of the state to encourage internal improvements such as roads and canals. One project that was contemplated at this time was linking Saginaw River, which flowed into Saginaw Bay, with Grand River, which flowed into Lake Michigan. In January 1835, Lucius Lyon presented a petition of sundry citizens of the Territory of Michigan, praying that an appropriation be made for the purpose of erecting a light-house at the confluence of the Saginaw river with Lake Huron, and improving the navigation of said river and its tributary streams. Congress approved $5,000 on March 3, 1837 for the lighthouse, but when Lieutenant James T. Homans visited the river the following year, he noted that no preparations had been made for it. Homans encouraged the project with the following words:

The commerce of this place is considerable, and increasing; the lumber trade alone will soon be of important value, and well worthy of this guide to its location. Saganaw city is twenty miles up the river of the same name; the citizens of which town look forward to great increase in their prosperity when the canal, now being made, is completed, connecting the waters of Saganaw river with those of Grand river, on lake Michigan; by which internal navigation a lengthy voyage on the lakes is obviated.

Work on the Northern Canal, designed to link Saginaw Bay and Lake Michigan, began in 1838 but was abandoned the following year when the newly formed State of Michigan failed to provide the necessary funding. Even without the canal, marking the river was still deemed important, and in 1839, President Martin Van Buren had the government purchase forty acres of land at the mouth of the river from the Chippewa Indians.

A sixty-two-foot, circular, stone tower, which tapered from a diameter of fourteen feet, ten inches at its base to eight feet at its lantern, was completed in 1841 by Levi Johnson. Flanking the tower was a one-and-a-half-story dwelling, which measured thirty-four by twenty feet and had two rooms on its first floor and two bedrooms in the upper story. Seven lamps, set in fourteen-inch reflectors, were used in the lantern room to produce a fixed white light that was visible for up to fifteen miles. A sixth-order lens replaced the array of lamps in 1856.

The first keeper of the lighthouse was Harvey Williams, who built the first two steam sawmills on Saginaw River but subsequently lost his fortune on land speculation. Keeper Williams served for just two years before moving on to other ventures in 1843.

When Henry B. Miller, Superintendent and Inspector of Lights on the northwest lakes, visited the lighthouse in July 1850, he was informed by Keeper William Pomeroy that the original contract for the lighthouse called for a kitchen attached to the dwelling. Inspector Pomeroy recommended that a woodshed be built for $20, a new boat be provided for $35, and that the tramway leading across a swamp from the river to the lighthouse be repaired for $100, but he left the decision of whether a kitchen should be built at a cost of $175 to Stephen Pleasonton, Fifth Auditor of the Treasury. Records show that a fifteen by nineteen kitchen had been added to the dwelling by 1858.

Peter Brown was appointed keeper of Saginaw Bay Lighthouse in 1866. Keeper Brown was reportedly a cripple and much of the work of tending the light fell upon his fifteen-year-old son Dewitt and his wife Julia. In 1866, a project was proposed for dredging a twelve-foot-deep channel through the bar off the rivers mouth. This work was undertaken in October 1867 by the Army Corps of Engineers and resulted in a channel that was 6,800 feet long and 195 feet wide.

In 1869, the Lighthouse Board recommended that range lights be built to show the way into the river, as the present light only shows its whereabouts. The Board proposed two plans: to build two new substantial towers at a cost of $60,000 and dispense with the current lighthouse, or retain the lighthouse and erect small towers at a cost of $12,000 to serve the range. Congress appropriated $12,000 for the range lights on July 15, 1870, and the county surveyor of Bay County was asked to survey the required sites. When the owner of the needed swampland asked $2,500 for the sites, the Lighthouse Board asked the governor of Michigan to set up a commission to condemn the property under state laws. This plan backfired as the commission determined $17,496.84 was fair and just compensation! At this point, the Board decided to abandon the project, and the unused funds were returned to the treasury.

The Lighthouse Board noted in 1873 and 1874 that the rubblestone keepers dwelling was old and dilapidated and requested $8,000 for a new one. On March 3, 1875, Congress provided $23,000 for the erection of range lights to guide into the cut through the outer bar at the mouth of the Saginaw River, and for the construction of a new dwelling. Congress also authorized the Lighthouse Board to lease the necessary land for the lights if needed. The Board noted later in 1875 that no agreement could be worked out for the land due to the impossibility of concluding any reasonable bargain with the owners, but there must have been a breakthrough as work on the range lights began in May 1876.

A square, pyramidal tower, with a height of thirty-four feet, was built atop a square, timber crib at the western side of the rivers entrance to serve as the front light. The upper portion of the wooden tower was enclosed and topped by an octagonal lantern from which a sixth-order Fresnel lens exhibited a fixed red light. The rear light, a fixed white light located 2,310 feet upstream, was exhibited from a square, pyramidal tower built into one corner of a two-story dwelling.

Due to the swampy nature of the land, timber piles had to be driven deep into the ground to support a pier foundation for the rear structure. The fifty-three-foot tower and dwelling were both built with yellow brick, and the towers spiral staircase served as the only means for traveling between the floors of the dwelling.

Keeper Peter Brown passed away in 1873 before the range lights were built, but his family remained at the station as Julia, his wife, was placed in charge of the light. On September 15, 1876 the old light was discontinued, and Julia exhibited the lights of the new range. No longer needed, the old tower and dwelling were demolished.

Julia served as head keeper until 1877, when George Way, whom Julia had married in 1875, was placed in charge of the light. Julia was made first assistant keeper and served in this role until the position was abolished in October 1882. The position was reinstated the following spring but was filled by Leonidus Charlton. Keeper Way passed away in November 1883, and sixty-seven-year old Julia left the station, which had been her home for seventeen years.

In 1891, the characteristic of the rear light was changed from fixed white to fixed red, and the front tower was painted red instead of white. The color of the range towers was changed to white in 1898, and a portion of the lighthouse reservation that was no longer needed was sold at auction for $1,500. A 625-foot-long plank walk was built to link the two range lights in 1896.

By 1901, a keepers dwelling had been built for the assistant near the front light as that year the dwellings western wall was taken down and rebuilt. Also in 1901, all soft and defective bricks in the rear tower were replaced, and the entire structure was stuccoed with a half-inch-thick layer of Portland cement.

In 1915, a black, pyramidal, skeletal, steel tower, with a focal plane of thirty-nine feet and a white slatted daymark, replaced the existing front light. The timber cribwork for the front light was replaced by concrete at the same time, and electric lights were installed in both the front and rear towers.

William A. Burke was appointed head keeper of the range lights in 1900, and his service at the station would span more than three decades, far longer than any other keeper at the range lights. Burke began his lightkeeping career as third assistant keeper at Spectacle Reef in 1894, and after working his way up to second assistant there, he was appointed head keeper of Frying Pan Island Lighthouse in 1896.

During his service at Saginaw River Range, Keeper Burke was recognized for towing a disabled sailboat to safety in 1917, for rescuing stranded motorboats in 1918 and 1919, and for using the stations boat in 1925 to free a steam tug that had gone ashore near the range lights.

After the Coast Guard assumed control of the countrys lighthouses in 1939, the rear range light was home to coastguardsmen until a new station was built in Essexville in 1981. The light in the rear tower was deactivated in 1963 when a new channel was dredged requiring a new set of range lights to mark it.

The rear tower and attached dwelling were sold into private hands after the Coast Guard left in 1981, and then Dow Chemical, which owned a large swath of adjoining land, purchased the lighthouse and surrounding reservation in 1989. The company boarded up the lighthouses windows and doors to keep vandals and animals at bay and paid for a study to determine the cost of a thorough restoration.

In 1999, members of Saginaw River Marine Historical Society approached Dow Chemical and worked out an agreement that would allow them to restore the abandoned lighthouse to its 1950s appearance. When the group first visited the lighthouse, it found that windows were broken out, walls were falling down, and the floors were covered in plaster and lath. Undaunted, the volunteers set about replacing the dwellings roof, replacing broken windows, and removing all the lath and plaster so any underlying structural issues could be addressed.

Access to the lighthouse is restricted, but the Marine Society has been able to open the structure up for tours during tall ship celebrations held in Bay City during the summer of 2006, 2010, 2013, and 2016.

The dwelling that was situated near the front range light was demolished in 2018 after it had deteriorated beyond repair.

The lighthouse is located just north of Bay City on the western bank of the Saginaw River near where it empties into the bay.
Latitude: 43.63553, Longitude: -83.85056

For a larger map of Saginaw River Rear Range Lighthouse, click the lighthouse in the above map.

Saginaw River Marine Historical Society is working towards the restoration of the structure, and the lighthouse and surrounding area currently only accessible to members of the society during scheduled work sessions. The Fresnel lens used in the lighthouse is on display at the Coast Guard station in Bay City.