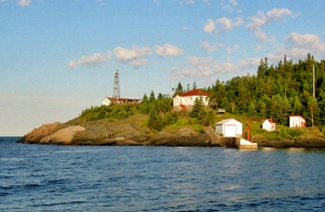 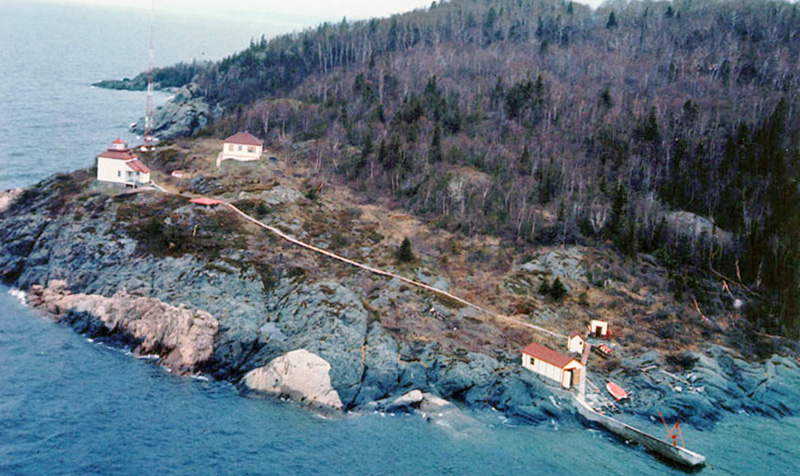 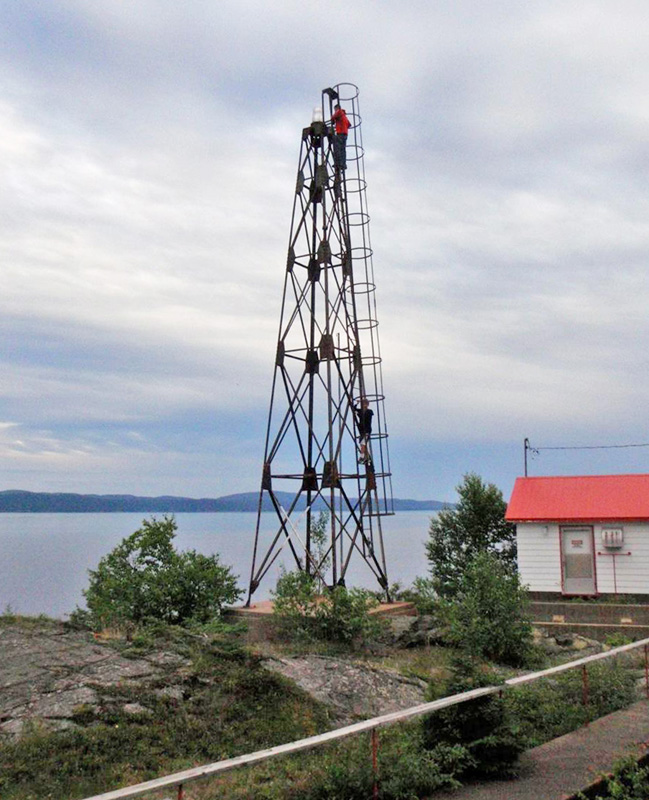 In the 1890s, Francis Hector Clergue, a flamboyant American industrialist, began efforts to capitalize on the discovery of high-quality iron ore near the present-day town of Wawa. After purchasing the claims, Clergue developed Helen Iron Mine, named after his sister, and built a railway from the mine to Michipicoten Harbour, situated sixteen kilometres away in the northeast corner of Lake Superior. The ore docks Clergue had built at Michipicoten Harbour were huge, featuring a 229-metre-long approach trestle, a 84-metre-long ore dock, and a 183-metre-long pier.

In July 1900, the inaugural railcars transported ore from Helen Mine to Michipicoten Harbour, where it was loaded onto freighters and transported to blast furnaces in Midland, Ontario. Most of the early ore was shipped to American steel mills until Celruge established a blast-furnace operation at Sault Ste. Marie in 1902. While ore was the primary industry in the area, it wasnt the only one. Gold had been found in quartz veins in the areas igneous rock, prompting the establishment of several gold mines. The lumber industry also took off, and pulpwood was floated down the Michipicoten River to Lake Superior from where tugs towed it to mills in Sault Ste. Marie.

A peninsula known as Little Gros Cap protects Michipicoten Harbour from the full fury of Lake Superior, and in 1902, the Department of Marine established a lighthouse on Perkwakwia Point, the southeast tip of the peninsula, to mark Michipicoten Harbour. A temporary light, shown from a seventh-order lantern mounted on a stand at a height of fifty-feet above the lake, was placed in operation at the opening of navigation in 1902 until the formal lighthouse was finished. The following description of Michipicoten Harbour Lighthouse appeared in the Annual Report of the Department of Marine for 1902:

A lighthouse, built on the southeast extremity of Little Gros Cap, entrance to Michipicoten harbour, was put in operation in August, 1902, replacing a temporary lens lantern light maintained since the opening of navigation.

The lighthouse is a square wooden building, surmounted by a square wooden lantern rising from the middle of the cottage roof. The building and lantern are painted white. The roof of the building is red. The lighthouse is 31 feet high from its base to the top of the ventilator on the lantern, and is located on the summit of Little Gros Cap, on land 46 feet above the level of the lake, and 120 feet back from the waters edge.

The light is a fixed white light, elevated 70 feet above the water level of the lake; it should be visible 14 miles from all points of approach by water, but is not visible from the wharves in the harbour. The illuminating apparatus is dioptric of the seventh order. The lighthouse was built by Mr. J. Candlish Kennedy, of Owen Sound, whose contract price was $2,570. Tenders for this work were invited in 1901, but the lowest tender received, $4,857, was so much above my estimate, that the work was postponed and new tenders invited.

Raymond Spears set off in a rowboat during the summer of 1912 on an excursion that would take him to all of the Great Lakes. Spears stopped at several lighthouses and gave the following account of a visit to Michipicoten Harbour Lighthouse, where he met William T. Richardson, its first keeper:

I rounded Little Gros Cap and rounded in at the boathouse of the light there. The house was built on rocks, but I watched my chance and ran in, leaped out and hauled the skiff up on the smooth rocks, and went up to the lighthouse to see William Richardson, the keeper, who has for more than twenty years lived along that shore, and who has a harbor, Richardsons, named after him. Hunter, trapper, fisherman, boat builder, he has lived the life of an outdoor man and probably understands the shore from Otter Island to the Soo better than any other man. His wife, a girl and a relative were at the light, but he was not there, having crossed to Gargantua in a fish tug.

I remained here two nights, and on the second night Richardson showed up about 9 oclock, almost starved, for he hadnt had anything to eat but rabbits, partridges and trout for two days, except that they had flour on the boat and made flapjacks without baking powder.

I had thought to find here [at Michipicoten Harbour] a large settlement, but there was only a store, a few houses, a steamboat landing, and the end of a railroad that led to a mine twelve miles back, where several hundred men are employed. This road has just been connected with a road that runs north from the Soo, clear up to the main transcontinental line, but the country will never be much less of a wilderness than it is now. Perhaps opening of mines and pulp cutting jobs will cause the thinning out of the game, but that will be all.

Keeper Richardson died at the age of sixty-three on February 6, 1915 and was buried in the Bethune cemetery near the Michipicoten River. William D. Reid took charge of the light in 1915 and served as keeper for seven seasons until meeting a tragic death while returning to the station in the spring of 1922.

On April 18, 1922, the C.G.S. Lambton sailed out into Lake Superior from Sault Ste. Marie amid ice floes to deliver keepers to their stations. After offloading Keeper Miron and his supplies at Gargantua Harbour, the Lambton set sail for another station but went down on the nineteenth taking with it William Reid, keeper of Michipicoten Harbour Lighthouse, George Penfold, keeper of Caribou Island Lighthouse, and his assistant, and John Douglas, keeper of Ile Parisienne Island, and his assistant, along with a crew of sixteen. Fifty-nine-year-old Keeper Reid left behind a wife and three children.

In 1930, the fixed white light of Michipicoten Harbour Lighthouse was changed to a white flash every thirty seconds, and in 1943, a diaphone fog alarm was established at the station in lieu of a hand-operated foghorn that had been provided to the keeper in 1912. In 1946, a radiobeacon was installed at the station and synchronized with the fog alarm for distance finding.

In 1967, a 12.7-metre-tall skeletal tower replaced the original wooden lighthouse. Besides this skeletal tower, a keepers dwelling, boathouse, and helicopter landing pad are still found on Perkwakwia Point. The characteristic of the light is a white flash every ten seconds.

Helen Mine shut down in 1918, due to low profits, but it returned to operation in 1937 after new techniques allowed the ore to be processed with a far greater profit margin. During the period the mine wasnt operating, Michipicoten Harbour was used primarily for receiving coal shipments that were distributed to coal stops along the Canadian Pacific Railway (CPR) and the Canadian National Railway (CN). By 1950, all the ore was transported from Helen Mine exclusively by rail, and in the 1960s, the CPR and CN replaced their coal locomotives with diesel locomotives, eliminating the need for coal deliveries at Michipicoten Harbour. In 2009, Superior Aggregates Company received permission to start mining aggregate just north of the harbour. The global recession postponed the opening of the mine, but if it is eventually opened, the harbour facilities, which have sat largely unused for several decades, will likely be refurbished.

For a larger map of Michipicoten Harbour Lighthouse, click the lighthouse in the above map.

The lighthouse is best seen by boat. Lake Superior Adventures has a lodge on Michipicoten Bay and offers excursions that may pass Michipicoten Harbour Lighthouse.