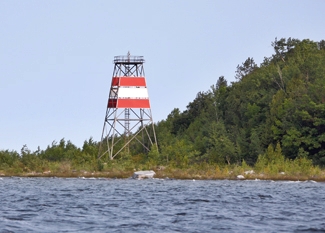 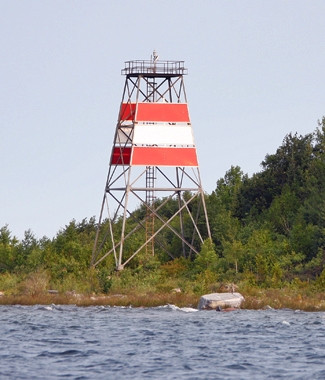 Five-kilometre-long and two-kilometre-wide Giants Tomb Island lies just off the entrance to Severn Sound and its communities of Penetanguishene, Midland, Victoria Harbour, and Port McNicoll. The islands domed middle section gives it a unique profile and lead to the Huron legend that the island is the site of the tomb of Kitchikewana. According to Huron tradition, when Kitchikewana learned that the woman he wanted to marry was engaged to another man, he scooped up a gigantic ball of earth, his fingers creating the five harbours in Severn Sound, and tossed the material out in Georgian Bay. As the dirt and rock scattered, the 30,000 islands of Georgian Bay were formed. Exhausted by this feat, Kitchikewana lay down on Giants Tomb Island for a rest and died on the spot. The Hurons warned that the island was to be avoided at all times, especially at night, otherwise the giants death-like slumber would be disturbed and the consequences would be considerable.

The lighthouse on Giants Tomb Island, in the Georgian Bay, which was in course of construction when the last annual report was prepared, has been completed, and was put in operation on the opening of navigation last spring. The light is fixed white, elevated 40 feet above the level of the bay, and should be visible 11 miles from all points of approach by water.

The illuminating apparatus is dioptric of the 7th order. The lighthouse stands on the boulder and gravel beach at the southern extremity of the island, close to the water. It consists of a small wooden tower with dwelling attached painted white, the tower surmounted by an iron lantern painted red.

The height of the building from its base to the vane on the lantern is 37 feet.

The total expenditure in connection with the establishment of this light has been $2,177.35.

Alfred H. Griffith replaced Little as keeper in 1898 and served on the island for the next twenty-six years. During this period, the fixed white dioptric light was replaced on July 27, 1914 by a flashing white catoptric light with the following signature: flash, three-and-a-half-second eclipse, flash, eleven-and-a-half-second eclipse. For half the time of revolution, or seven-and-a-half seconds, the light was totally eclipsed, while for the other half, a light of 450 candlepower was visible, through which the stronger flashes of 25,000 candlepower was shown. The illuminant used in the new lighting apparatus was petroleum vapor burned under an incandescent mantle.

On November 1, 1916, Keeper Griffith was given a megaphone and a hand-operated foghorn, which he was required to sound in response to the signals of steamers in the area.

In November 1920, the loss of Keeper Griffiths beloved companion was carried in several newspapers, including The Norwalk Hour in Connecticut.

Midland, Ont., Nov. 18  While waves and wind sang a requiem, Alfred Griffith sat for three days and nights in a lonely vigil beside the corpse of his wife, who died in the light house on the bleak shores of Giants Tomb, which they had kept for 22 years.

Mrs. Griffith died Friday night in her husbands arms, in the midst of one of the worst storms that had ever raged along the coast. The storm continued for three days, making it impossible for him to reach the mainland in a small boat. He never left her side save to minister to the light.

When the storm abated Monday night he was able to signal to those on shore and help soon reached him. He buried his wife in the little cemetery here yesterday.

Today, Griffith returned to his beloved light, the only tried and true friend remaining to him.

Joseph Martin, a veteran of World War I, was hired as keeper of Giants Tomb Island Lighthouse in 1924, and he would serve until the light was made unwatched in 1936. Exina Martin, Josephs wife, was reportedly terrified of the water, but raised three children on the island for over a decade. One day when she was scrubbing clothes in the boathouse, she felt her foot become entangled in a rope. As she kicked her foot to free it, she looked down to discover that the rope was actually a snake. Screaming hysterically, Exina stormed up to the lighthouse and announced, Im not staying here another night, I am not staying here!

Keeper Martin had his own experience with a snake when he went out to collect eggs from the chicken coop. After lighting a match, he was dumbstruck to see a six-foot-long fox snake curled up in a hens nest. The snake had swallowed every egg in the coop along with a white doorknob that was used to encourage the hens to lay. The latter was evident by a large bulge in the snake.

After being changed to an unwatched flashing light in 1936, Giants Tomb Island Lighthouse remained in service until 1969, when it was replaced by a skeletal tower with a white rectangular daymark that displayed a light at a height of fifty-one feet.

For a larger map of Giants Tomb Island Lighthouse, click the lighthouse in the above map.