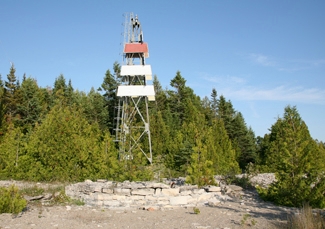 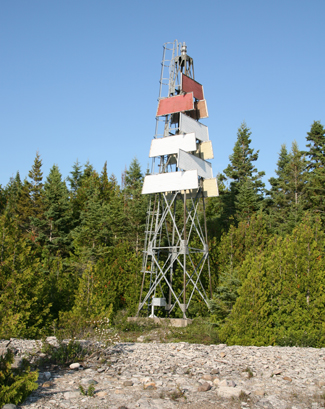 Situated on a picturesque bay on the southern shore of Manitoulin Island, Providence Bay is known for having the best sand beach on the island. It wasnt the sandy beach that attracted the first European settlers to the bay, which was named by Captain Henry Bayfield during his survey of Lake Huron around 1820, but rather the stands of untouched timber. In November 1870, Thomas Garland, Ralph W. Mutchmor, and John R. McNiven formed the Providence Bay Milling Company and established a lumber bill on the Mindemoya River, which links Midenmoya Lake to Lake Huron. By 1885, Providence Bay boasted twenty houses, a hotel, a general store, and two churches. On October 31, 1903, the Department of Marine and Fisheries awarded a $1,237 contract for constructing a lighthouse at Providence Bay, and the following year the department announced the completion of the structure:

A light established at Providence bay, on the south-shore of Manitoulin island, lake Huron, was put in operation on the 27th July, 1904.

The lighthouse stands on the extremity of Providence point, the headland on the east side of the mouth of the bay.

It is an octagonal wooden tower, with sloping sides, painted white, surmounted by an octagonal iron lantern, painted red. It is 42 feet high from its base to the top of the ventilator on the lantern.

The light shown is a fixed white light, elevated 43 feet above the level of the lake. It should be visible 11 miles from all points of approach by water. The illuminating apparatus is dioptric of the seventh order.

The light was erected under contract by M r. J. Candlish Kennedy, of Owen Sound.

When Thomas E. Ellis died in 1937, after having kept the lighthouse for twenty-five years, there was intense competition for his position as the community was still recovering from the Depression. The Liberals handed the keys of the lighthouse to Milton Buie, a staunch supporter of the party who had a large family and was unemployed, but many in Providence Bay felt the job should be given to the most qualified person. With pressure mounting, the Liberals acquiesced and agreed to give the position to whomever scored highest on a qualifying examination.

Alonzo Buck, a Conservative and a veteran of the Great War who already had a small pension, had the highest score among the five who took the exam, and he made the new keeper. When Buck called at the Buie residence to pick up the keys to the lighthouse, he was greeted by Mrs. Buie who berated him for taking food directly out of the mouths of the children.

As the town remained deeply divided over the matter, politicians worked out a deal where Alonzo Buck was offered an increase to his existing pension if he would agree to let Buie take over as keeper. The agreement was finalized in 1938, and Milton Buie went on to serve as keeper of Providence Bay Lighthouse for over a decade.

Providence Bay Lighthouse was automated in 1953, and just over twenty years later, on October 14, 1973, the old wooden lighthouse burned to the ground. According to some, the lighthouse was struck by lightning, but others claim the fire was set intentionally. A metal tower marks Providence Bay today, just a few steps from the foundation of the 1904 lighthouse.

For a larger map of Providence Bay Lighthouse, click the lighthouse in the above map.

At Providence Bay, continue east around the bay until the road ends at a boat ramp and small harbour. You can park here and then walk along the shore for roughly one kilometre to reach the modern tower.