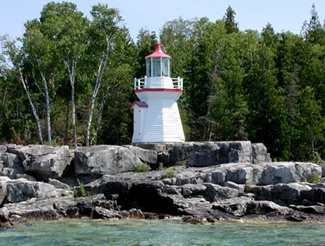 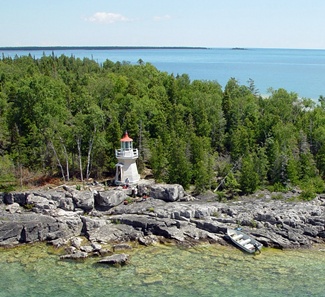 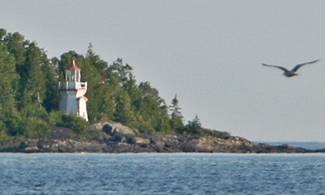 In 1866, Robert A. Lyon and Associates of Toronto were granted a timber license for twenty-two square miles on Manitoulin Island and mill privileges on the Manitou River, which empties into Michaels Bay on the islands south shore. Located on a horseshoe-shaped inlet, just five kilometres west of South Baymouth, the settlement at Michaels Bay started out with just twenty men, but quickly grew to a population of over sixty, and by 1870, more than two million board feet of lumber were being milled on the bay. In its heyday, Michaels Bay was a significant settlement, boasting two stores, a hotel, multiple taverns, a bakery, and a blacksmith shop. Robert A. Lyon was definitely in charge of the town as its streets were named after his children.

To help ships safely reach the mill at Michaels Bay, Robert A. Lyon agreed to build a lighthouse if the government would pay half the expense. The lighthouse was built during 1869 but not activated until October 21, 1870, when it began showing a fixed white light from a mammoth circular-burner lamp without any reflecting apparatus. Michaels Bay Lighthouse was the first light to mark the southern shore of Manitoulin Island and the islands second, after the set of range lights established at Little Current in 1866. R.A. Lyon & Company maintained the light until 1875, when the company transferred the lighthouse to the Department of Marine.

The following description of the lighthouse appeared in the Department of Marines annual report for 1876:

This light was kept by the Mill Company, who employed a man by the name of J. W. Chisholm to attend to it, but the charge has now been assumed by the Government. It is a fixed white catoptric light, containing one mammoth flat-wick lamp and two convex 30-inch reflectors. The glass is 17 x 21 inches. The [octagonal] lantern is made of iron four and a half feet in diameter, and has a wooden floor, which is neither painted nor covered with metal. The tower is 22 feet high, and is only middling well kept. A new lamp has been ordered from Collingwood.

A crude keepers dwelling was associated with the square, wooden lighthouse, and in 1878, the Superintendent of Lights noted that this residence required extensive plastering, as its seams were very open after the green timber used to build it shrank. At this time, Keeper Chisolm had a family of four living with him.

After being denied permission to increase the extent of its cutting rights, the debt-ridden Robert A. Lyon & Company transferred its license to the Toronto Lumber Company in 1878. Production levels were still good at this point, with 20,000 shingles and 3,500 board feet of lumber being produced each day. A road was also built between Michaels Bay and Manitowaning, making the settlement more accessible.

The Toronto Lumber Company was sold to the newly incorporated Michaels Bay Timber Company in 1882, and once again, Robert A. Lyon was back in charge of the milling operation. Lyon had been serving as a member of the provincial parliament since 1878. He resigned in 1884 after complaints of electoral irregularities during the previous election, but he was elected again in 1885, after the government divided his riding.

The Timber Company survived for six years before declaring bankruptcy in October 1888, having exhausted its supply of timber and suffering from a substantial debt load. With many of his constituents affected by unpaid debts and the closure of his company, Lyon was defeated in the general election of 1890 and soon left for Sault Ste. Marie.

At the close of the 1898 navigation season, the Department of Marine discontinued the light at Michaels Bay as the traffic there had fallen off and a set of range lights had been established at South Baymouth, where there was a better harbour.

For some reason, the light at Michaels Bay was re-established on June 1, 1900, but then permanently discontinued in 1907. Most of the buildings at Michaels Bay were destroyed by a series of brush fires between 1910 and 1914, creating Manitoulin Islands only ghost town. Being situated on Michaels Point, about a mile from the town, the lighthouse survived the fires and remained standing until it collapsed in 1947 after decades of neglect.

Michaels Bay Lighthouse would have been all but forgotten had it not been for Ron Anstice and his neighbor Ron Hierons. Anstices father purchased five lots near the lighthouse property on Michaels Bay in 1937, and Ron remembered exploring the old town site and seeing the lighthouse before its demise. Anstice and Hierons, a former contractor, hatched the idea to rebuild the lighthouse to help keep a record of the old community alive.

Using a metal detector, a portion of the lantern rooms original framework was discovered that indicated it was octagonal in form. Other evidence led the men to believe the tower was octagonal as well, and over the next several months a lighthouse slowly took shape on Anstices farm. Eight vertical sections were bolted together to form the tower, and the farmers cut, shaped, and soldered together the tin roof for the lantern room. When complete, the lighthouse was disassembled and transported to Michaels Bay, where it was put back together in the fall of 2005. Cedar siding, cut and milled on the Anstice farm, was then applied to the exterior of the lighthouse, and the following July, the lighthouse was given a coat of white paint.

A solar-powered light was activated inside the towers lantern room on July 18, 2006, but it is directed only toward the mainland so as to not confuse mariners. A bronze plaque at the base of the lighthouse pays tribute to the keepers who cared for the original lighthouse.

For a larger map of Michael's Bay Lighthouse, click the lighthouse in the above map.