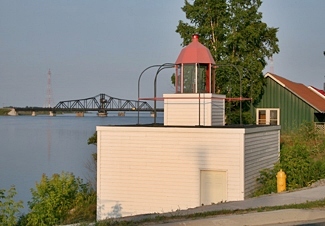 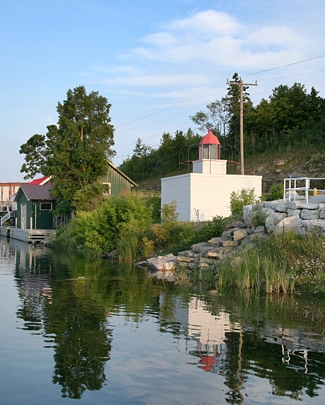 Lake Hurons North Channel lies between the Canadian mainland and a string of islands that includes, from east to west, Manitoulin Island, Cockburn Island, Drummond Island, and St. Joseph Island. The North Channels narrowest point is a 150-metre-wide passageway that runs between the community of Little Current on the northernmost point of Manitoulin Island and Goat Island. Known earlier as Shaftesbury, Little Current received its present name due to the swift currents that flow through this important passageway near the junction of the North Channel and Georgian Bay.

Donald McKenzie was hired as the first keeper of the range lights, and a good description of the ranges two square nearly identical towers was provided in the following 1878 inspection report:

There are two towers of the same size, viz: 22 feet high above the water, and are for the purpose of guiding vessels into the harbour by both channels. They each show a fixed white catoptric light from iron lantern, 6 feet square, containing two No. 1 base burner lamps in each. The glass of the lanterns are of two sizes, viz. 21 1/2 x 13, and 17 1/2 x 21 1/2 inches.

Donald McKenzie is keeper, he has a family of nine children.

The lighthouse on the main land requires new sills, the old ones are rotten, they are 12 feet long. The dwelling house requires replastering, an estimate to be sent.

A little insight into Keeper Donald McKenzies family can be had by noting that the 1877 annual report indicated he had a family of six children and the report for the following year says he had a family of nine children. One might be lead to conclude that the keepers wife must have had triplets, but what likely happened was just a fluctuation in the number of children and stepchildren from Keeper McKenzies three marriages that were living with him at the time. Census records indicate that he raised at least fourteen children.

Born in England in 1822, Donald McKenzie moved from Chicago to Owen Sound while still a young man and ran a fishing and trading business there for a number of years. From Owen Sound, he moved to Wikwemikong on Manitoulin Island and eventually settled in Little Current around 1862. At that time, Little Current had just one frame house, two white families, and several log huts inhabited by First Nations. Shortly after arriving in Little Current, McKenzie was appointed constable, followed by lighthouse keeper in 1866.

Donald McKenzie passed away in 1897 from consumption, and his obituary noted that during his thirty-one years as keeper of the range lights, he performed his duties faithfully and never a complaint was made against him. Donald McKenzie, Jr. took charge of the range lights after the death of his father. Two years later, Donald, Jr. married, but he too succumbed to consumption, dying in June 1901 just a month after his first child was born.

David Boyter was the next keeper of the range lights, and he witnessed many changes during his twelve years of service. Immediately after the opening of navigation in 1903, the south light was changed from fixed white to fixed red, so it could be readily distinguished from lights in the village. A lamp inside a seventh-order lens produced the new red light instead of the lamp and reflector that were previously used.

After a new channel with a depth of twenty-two feet was dredged off Spider Island, a new set of range lights had to be established in Little Current in 1907. The new front light was shown at an elevation of twenty-five feet from an anchor lens-lantern on B.H. Turners warehouse, while the new rear light was exhibited at an elevation of thirty-one feet from an anchor lens lantern on the Simms Brothers warehouse. While the old south range light was discontinued, the range light on Spider Island was retained and renamed Spider Island Lighthouse. The new range, known like its predecessor as Little Current Range, led along the axis of the deepest water abreast Spider Island Lighthouse to the wharves in Little Current or to the turn in front of the village. The front range light was also visible to the east to help guide vessels approaching from that direction. By 1910, the rear range light was being exhibited from a pole, and by 1919 both the front and back lights were pole lights.

Land access to Manitoulin Island was made possible after the Little Current Swing Bridge, which spans the passageway between Goat Island and Little Current, was completed in 1913. Traffic across the bridge was limited to trains until 1946, when modifications were made to allow automobiles. These days, the one-lane bridge, which stopped being used for trains in the 1980s, is in the closed position except for the first fifteen minutes of each daylight hour during the spring, summer, and fall, when it opens for marine traffic.

Little Current Rear Range Light was discontinued in 1937, and in 1946, the square, wooden lighthouse on Spider Island, which dated from 1866, was replaced by a skeletal tower.

In 2012, a replica of the Little Current South Lighthouse was constructed along the waterfront in town, complete with a birdcage lantern room.

For a larger map of Little Current Lighthouse, click the lighthouse in the above map.

The lighthouse is owned by the Town of Little Current. Grounds open, tower closed.