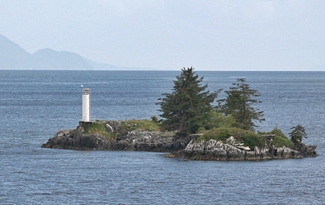 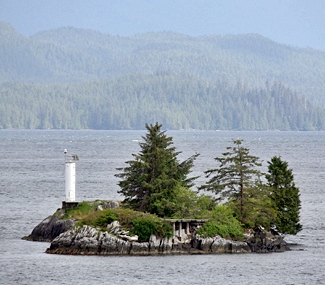 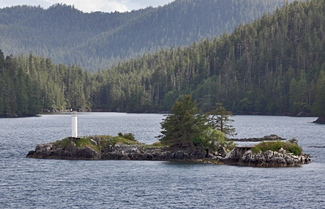 In 1896, the British Columbia Board of Trade called for a lighthouse on Pointer Island to help mark the Inside Passage for prospectors headed north for the Alaska Gold Rush. Situated at the junction of Fitzhugh Sound and Lama Passage, Pointer Island was named because it indicates the point at which a critical, nearly ninety-degree turn is needed.

Around the first of August 1899, the Quadra steamed north from Victoria with construction material and a work crew for erecting a lighthouse on Pointer Island. The project was completed in just over three months, and the Department of Marine announced the establishment of a new light:

A lighthouse erected on Pointer Island, Fitzhugh Sound, east entrance to Lama passage, was put in operation on November 15, 1899. The lighthouse stands on the south-east end of the small island south of the entrance. It is a white square wooden building with a red roof, surmounted by a red, square, wooden lantern, and is 30 feet high.

The light is fixed white, elevated 42 feet above high water, and visible 12 miles. The illuminating apparatus is dioptric of the 7th order. The building was erected by days work by the department, under the foremanship of Mr. D. M. Fraser of Vancouver.

James Codville arrived in Vancouver in 1887 with his wife Fanny and five-year-old son Ben, and three years later he began working for the Department of Marine and Fisheries as a guardian on the Skeena and Nass Rivers in northern British Columbia. Hearing that King Island, located just across Fitzhugh Sound from Pointer Island, would be selected as the western terminus of the new Grand Trunk Pacific Railroad, Codville sunk his life savings into a tract of land on the island in 1894. When the railroad chose present day Prince Rupert as its terminus, Codville and his nearly penniless family were stuck on a remote, lightly populated section of the coast. After an aborted attempt to start a lumber mill, Codville settled for a time at Namu and then took a job in 1899 helping construct the lighthouse at Pointer Island.

With an intimate knowledge of the area, Codville was well qualified to be the lights keeper, and the department hired him to fill that role at an annual salary of $360. One would think that a regular paycheck and government-supplied housing would have been a step up for the Codvilles, but when Captain John T. Walbran of the Quadra stopped to deliver supplies in 1900, he learned that wasnt the case.

I saw Mr. Codville, he tells me he cannot stay as the salary he receives does not provide them with food sufficient to sustain health, and really I must say a more weak looking and famished family I never came across  I was so sorry for them that I gave them a few provisions. Mrs. Codville cried and said better to return to King Island and live in the charity of our neighbours than be famished and keeping a government lighthouse. The old man is trying to earn a penny or two by writing stories suitable for periodicals but I understand to present his labours have not been successful. To look at him he doesnt seem to want very much more in the world  he is so frail and thin.

Even though Keeper Codville didnt see a pay increase until 1909, when his salary was raised to $465, the family managed to survive on the tiny, one-and-a-half-acre island. Codville remained in charge of the light until his passing in 1917 at the age of eighty-three. Ben Codville, aged thirty-four, became keeper on his fathers death, and soon thereafter his anxious mother, who had become blind, decided it was time to find Ben a spouse. When Captain William Oliver of the mission boat Udal made his next call, Fanny Oliver handed him Bens photograph and asked him to see if some young women in Vancouver might be interested in paying him a visit.

Captain Oliver contacted the Salvation Army and was referred to their home for girls, where the matron thought that Annie, whose fiancé had run off and married another woman, might be a match. On what was the ultimate blind date, Annie agreed to sail north and meet Ben. Captain Oliver arranged for a member of his congregation at a cannery to meet Annies steamer, row her over to Pointer Island, and, if things didnt work out, retrieve her. Retrieval wasnt necessary, and during his next voyage, Captain Oliver stopped at Pointer Island and married Ben and Annie.

Bens twenty-nine years as keeper spanned World War II, and during this conflict, Annie was a staunch war-worker, knitting the second highest number of socks for soldiers of the British Empire. After his retirement in 1946, Ben Codville received the Imperial Service Medal, an honor held at the time by only thirty other Canadians. When asked why he and his wife decided to retire to Prince Rupert, Ben simply explained that that was where the department had offered to take them.

Jean Ness Findlay, a painter and reporter, visited Pointer Island in 1942, and when a remark was made about ice cream, Jean offered to bring some to the Codvilles on a return trip. No, thanks all the same, replied Ben. Ive done without it for 23 years and I dont want to get a taste for it now. One can only imagine all the other things the Codvilles discovered they had done without when they arrived in Prince Rupert: telephones, cars, paved roads, restaurants, crowds,

Heavy seas destroyed nearby Egg Island Lighthouse in November 1948, and when a new concrete lighthouse was built there the following year, the department also decided to build a similar one for Pointer Island, along with a fog alarm building. This boxy replacement was also a combined tower and dwelling, but built of concrete instead of wood.

Prior to 1949, the keepers at Pointer Island sounded a hand horn in response to a steamers whistle, but now the keepers and their families had to learn to live with a diaphone fog alarm that gave a three-second blast every twenty seconds during thick weather. The characteristic of the light was also changed in 1949 from fixed white, which could be confused for a ships light, to a light that was alternately on for four seconds and off for four seconds.

Lyle and Velma Bigelow grew up in one of the Mormon settlements in southern Alberta but left for British Columbia when Lyles poor health forced them to look for a job that would allow him more rest. With their adopted French Canadian daughter and Irish twin daughters, the Bigelows spent eighteen months at Green Island Lighthouse and three months at Langara Point Lighthouse before moving to Pointer Island Lighthouse in 1959.

The Bigelows didnt believe they would have any biological children, but they were blessed with two miracles when Velma gave birth at Bella Bella to a boy in 1960 and a girl in 1963. A sixth child was added in 1967, when the family adopted a First Nation daughter from Bella Bella.

Velma taught her children at the lighthouse by correspondence, but as they got older, some of them would live with families in Bella Coola or another town to attend public school. Each year, the family would take a multi-week vacation to visit family and to give the children a chance to see how the world lived.

Even on isolated Pointer Island, holidays were much anticipated by the Bigelow children. At Halloween, they would dress up and knock on every door in the lighthouse, pretending each door was a different house. One year, when an assistant keeper with four children was on the island, a costume contest was held, and the winner was Amy Bigelow, dressed up like a lighthouse. Each December, Santa Claus brought gifts by helicopter, rather than sleigh, and one of the plentiful pine trees on a nearby island was cut down, hauled back to the lighthouse, and decorated.

In 1964, a separate dwelling, known as the big house, was built on Pointer Island to provide room for a second keeper. Three years later, the concrete lighthouse was replaced by a new dwelling, and a skeletal tower was erected for the light.

Poor health brought Lyle Bigelow to lighthouse life, and ironically, it also took him away from it. After Keeper Bigelow experienced recurring mini-strokes, doctors ordered him back to civilization. When we had to leave, recalled Velma, it was the saddest time of my life. I thought my life was over. In 1982, one year before his retirement, Lyle Bigelow was awarded a plaque for twenty-five years of service on the lights.

Pointer Island Lighthouse was de-staffed in March 1989. Shortly thereafter, all of the stations buildings were demolished, and a cylindrical column was erected to display an automated light.

While nothing remains on Pointer Island to remind people that several families spent a good portion of their existence on the rocky islet helping mark a crucial turning point on the Inside Passage, the Codville name is firmly attached to neighbouring King Island. Directly east of Pointer Island is the narrow entrance to Codville Lagoon Marine Provincial Park, which offers scenic, all-weather anchorage. Perhaps one day, an informational sign will explain the familys connection with both King Island and tiny Pointer Island.

For a larger map of Pointer Island Lighthouse, click the lighthouse in the above map.

Pointer Island Lighthouse is best seen from the water and is visible from the ferries that serve the Discovery Coast and Inside Passage from Port Hardy.