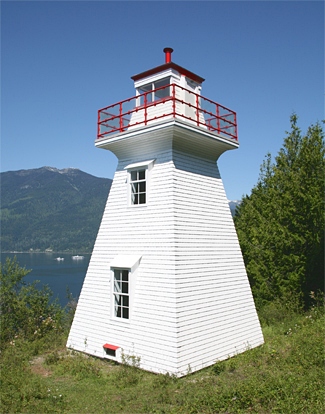 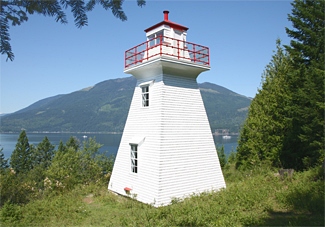 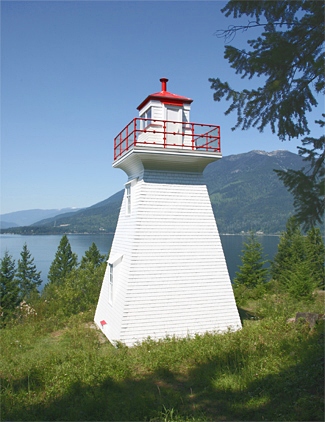 Kootenay Lake is a long, narrow, and deep fjord-like lake, located between the Selkirk and Purcell mountain ranges in eastern British Columbia. With a length of 104 kilometres and a width of three to five kilometres, the lake is one of the largest in the province.

In the 1890s, sternwheelers plied the waters of Kootenay Lake, delivering prospectors and supplies to isolated mining camps and settlements along its shores and also linking the Crowsnest Railways Kootenay Landing, a terminal at the southern end of the lake, to one near Nelson. A remnant of this era can be visited in Kaslo, where the S.S. Moyie, the worlds oldest intact passenger sternwheeler, can be visited. The Moyie began service on the Nelson-Kootenay Landing Route on December 7, 1898 and filled this role until 1906, when the larger S.S. Kuskanook took over.

To guide the growing vessel traffic on Kootenay Lake, a lighthouse was built on Pilot Peninsula, situated on the east shore of the lake, opposite the entrance to the lakes western arm. The main body of Kootenay Lake runs north-south, but a significant arm leads west from the center of the lake and feeds Kootenay River, which merges downstream with the mighty Columbia River. Pilot Bay is a small, protected harbor just east of Pilot Peninsula and was so named because pilots of vessels often used it as a place of refuge during storms.

The following excerpt from the Department of Marines annual report for 1905 describes Pilot Bay Lighthouse:

A lighthouse was established on Pilot point, on the east shore of Kootenay lake, and was put in operation on January 1, 1905. The lighthouse tower stands on the highest point, near the north end of the peninsula formed by Pilot bay, formerly popularly known as Cape Horn but re-named Pilot point by the Geographic Board of Canada. It is a wooden building, square in plan, with sloping sides, surmounted by a square, wooden lantern, the whole painted white. It is 37 feet high from its base to the ventilator on the lantern. The light is a fixed white dioptric light, of the seventh order, elevated 130 feet above the level of the lake, and visible 17 miles from all points of approach by water. This work was done by contract by D. C. MacGregor, of Kaslo, the contract price being $800.

In addition to Pilot Bay Lighthouse, minor lights were also established on Kootenay Lake at Kootenay Landing, Kaslo, and Procter. The light at Procter marked the southern side of the entrance to Kootenay Lakes western arm, where the towns of Balfour, Procter, and Nelson are found

With the extension of the rail line along the western shore of Kootenay Lake in 1931, Canadian Pacific Railway retired its fleet of steamships save the S.S. Moyie, which continued to operate on the lake until 1957. Upon her retirement, the Moyie was sold to the City of Kaslo for $1 and beached on the citys waterfront for use as a historical site.

The light at Pilot Bay was originally produced by an oil lamp and was maintained by keepers that lived nearby. O. McElroy served as the first keeper of the light, followed by Eugene Montreuil, who served through at least 1921.

In 1920, the Department of Marine issued an official Notice to Mariners announcing changes made at Pilot Bay Lighthouse: The light station established by the Government of Canada at Pilot Bay will in future show an occulting (on-off) white acetylene light instead of a white fixed oil lamp and will be unwatched.

Local contractors cared for the light after it no longer had a full-time keeper. One such person was Charlie Miller. Acetylene cylinders were dropped off at Pilot Bay beach, and Charlie hauled them up to the lighthouse site using a stone boat and his patient old white horse.

In the 1960s, the lighthouse was vandalized, having its plate glass windows shot out and its door burst in. A foreman was hired to repair the lighthouse during the fall of 1967, and he submitted the following letter to his boss explaining why a womans name appeared on the invoice for transporting materials to the site.

While employed by your department as foreman to repair Pilot Bay Lighthouse, I had to employ a horse to yard the material half a mile up to the site. The horses name is Honey. This may seem like so much trivia but its the quickest way to explain the situation. Honey arrived on the job and in due course was hitched to a stone boat with a load of shingles piled there-on but Honey wasnt having any of it. Honey kicked up her heel, bit at the would-be driver, and then sat down. So I went and dug Honeys boss out whose name is Topsy. She got out in front and said Come on Honey. Up the hill went Honey and that is how I come to have one old widow on the payroll.

Tugawar Enterprises Ltd. of Kalso repaired and refurbished the lighthouse in 1985 at a cost of $10,990. Solar panels were installed on the lighthouse in 1989 to power the lights characteristic of a one-second flash every twelve seconds. Pilot Bay Lighthouse was decommissioned on June 30, 1993 and donated to the Province of British Columbia two years later. The historic structure is now part of Pilot Bay Provincial Marine Park and is maintained through a cooperative agreement between BC Parks and volunteers from the Friends of West Kootenay Parks.

In 2003, two years before the lighthouses centennial, The Traditional Timber Framing Company placed two windows back in the south face of the lighthouse, restoring the towers original appearance. The lighthouses shake shingle siding was replaced in 2005, and a safer railing was installed on the lantern room gallery.

Visitors to Pilot Bay Lighthouse today are treated to not only a well maintained lighthouse but spectacular views of all three arms of Kootenay Lake.

For a larger map of Pilot Bay Lighthouse, click the lighthouse in the above map.

From the ferry landing at Kootenay Bay, turn south on Pilot Bay Road and drive 4.7 km (3 miles) to its end. Roughly 150 metres before the turnaround at the end of the road, you will find a trail on the west side of the road that leads about 300 metres uphill to Pilot Bay Lighthouse. The door to the lighthouse is open and visitors can climb to the top and enjoy spectacular views from the lantern room gallery.

The lighthouse is owned by BC Parks and managed by Friends of West Kootenay Parks. Grounds/tower open.


By taking what is billed as the world's longest free ferry ride, visitors can cross Kootenay Lake from Balfour to Kootenay Bay and then take a short drive to reach the trail to Pilot Bay Lighthouse. I highly recommend picking up a copy of "The History of Pilot Bay Lighthouse" from Gill & Gift at the Balfour ferry landing. The book gives a complete history of the lighthouse and proceeds are used to help maintain the lighthouse.