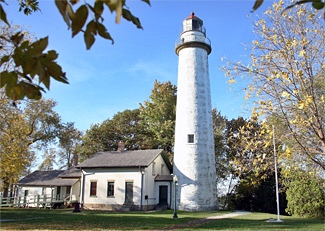 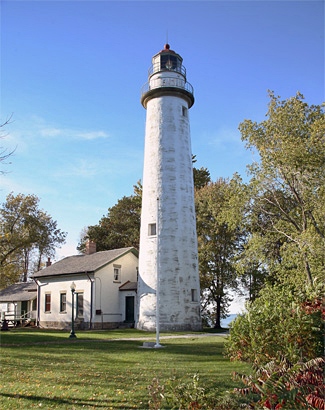 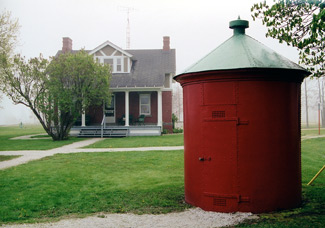 The extreme northeast tip of Michigans thumb is named Pointe aux Barques, French for Point of the Little Ships. This rocky cape marks the transition between Lake Huron and Saginaw Bay, and was a critical point for mariners. In 1838, James T. Homans, a lieutenant in the U.S. Navy, sailed the western Great Lakes, inspecting existing lighthouses and proposing sites for new ones. I chose the most westerly of the two points, known to lake navigators as Point-aux-Barques, near the entrance to Saganaw [sic] bay, for the light there, noted Homans, because it is sooner seen by vessels approaching from the northward and westward, by which it will be most used, also, as being near a shoal, dangerous to the navigation of its vicinity. There is stone in considerable quantity near this location, which can be used in constructing the buildings. The land, I presume, belongs to Government, or can be had for a moderate price, there being no settlements within several miles, and the soil very barren.

Congress appropriated $5,000 for a lighthouse on Pointe aux Barques on July 7, 1838, but this money seems to have been used to construct a beacon at the mouth of Saginaw River, and it wasnt until March 3, 1847 that another $5,000 was made available for a lighthouse on Pointe aux Barques. During 1847, a sixty-five-foot tower was constructed and equipped with nine lamps set in fourteen-inch reflectors to produce a fixed white light. Peter L. Shook was appointed first keeper of the lighthouse on March 3, 1848 and likely placed the light in operation at the opening of navigation that year. On March 31, 1849, Keeper Shook was sailing to Port Huron, when the boat capsized and he and three others aboard drowned. Peter Shook was forty years old at the time of his passing and left his wife Catherine and eight children.

Catherine Shook was appointed keeper in her husbands stead, becoming the first female lighthouse keeper in Michigan. Shortly after the death of Keeper Shook, a fire broke out in the keepers dwelling between the ceiling and roof above the kitchen. Henry B. Miller, Superintendent and Inspector of Lights for the northwest lakes, blamed the fire on a faulty chimney and sent the following report to his superior. The circumstances of this fire is the more to be regrettable as the husband of the keeper but lately found a watery grave in Lake Huron, and this affliction on this account falls with a double severity upon the widow who was lately appointed in his place. By this catastrophe, the widow not only lost a considerable portion of her furniture, but was badly burned in her attempt to keep the fire from the main building. They have erected temporarily a small shanty, which is very uncomfortable and unhealthy. I therefore hope that no time will be lost in having the dwelling rebuilt. After another visit to the lighthouse on July 2, 1850, Henry B. Miller reported: Everything in passable order. Conduct of keeper good.

Although Catherine was performing her duty well, the strain of keeping a light and caring for her children may have been too much as she resigned her position on March 19, 1851. Catherine passed away nine years later and was buried next to her husband in Oakwood Cemetery in New Baltimore, Michigan.

A new lighthouse, linked to a dwelling by a covered passageway, was built at Pointe aux Barques in 1857 by Alanson Sweet, Luzene Ransom, and Morgan Shinn, who were awarded contracts to rebuild several stations in Michigan around this time. The new tower, built of yellow brick, stood seventy-nine feet tall and had a focal plane of eighty-eight feet above the surrounding water. Its decagonal lantern room housed a third-order lens that, with the opening of navigation in the spring of 1858, exhibited a fixed white light varied every two minutes by a flash. The one-and-a-half-story keepers dwelling, also built using yellow brick, measured twenty-seven by twenty-nine feet with an attached twelve-by-fifteen-foot kitchen.

In 1867, the third-order Fresnel lens from Pointe aux Barques was exchanged for the fixed, third-order lens in use at Fort Gratiot Lighthouse. Due to the number of lights exhibited at the railway depot and other buildings near Fort Gratiot Lighthouse, the Lighthouse Board felt it needed a flashing characteristic to make it more visible to mariners. A third-order Henry-Lepaute Fresnel lens was installed in Pointe Aux Barques Lighthouse in 1873 to give the light a characteristic of a white flash every ten seconds.

A nineteen-foot-deep well was blasted and drilled through bedrock in 1884 to provide water for the station. A new frame woodshed was added in 1891, and the following year a circular iron oil house was erected. In 1898, the dwellings porch was enclosed for use as a storm house, and a new fence was built around the dwelling.

An act approved by Congress on February 26, 1907 authorized the construction of a second keepers dwelling at Pointe aux Barques at a cost not to exceed $6,500. Pointe aux Barques Lighthouse had just one keeper, until an assistant keeper was added to the station in 1859. Work on the dwelling, which is identical to one at Munising, began in May 1908 and was completed three months later.

Peter L. Richards served longer than any other keeper at Pointe aux Barques, being appointed first assistant keeper in 1895 and retiring as head keeper in June 1939. Keeper Richards and his wife Irene raised three sons and a daughter at the station. Leland Richards, the second-oldest child, recalls that on Sundays the family always went to church and playing ball or checkers on that day was not allowed. According to Leland, his father would spend a good portion of Sundays giving tours to people from places like Flint, Port Huron, and Detroit. Keeper Richards would escort each group up and down the tower and ended up carrying more than one person down.

One day Keeper Richards went to town and told his three sons to hoe the garden while he was away. The boys would each hoe a row and then strip and jump in the lake. This was repeated eighteen times that afternoon, but the boys never told their dad until years later as the lake was strictly off limits. On more than one occasion while the boys were asleep, Keeper Richards would push off a raft they had made and let an offshore wind carry it away.

The Great Lakes Storm of 1913 washed numerous boats ashore and sank eight ships on Lake Huron, killing 199 people. Winds reached 90 mph and stirred up mountainous thirty-five-foot waves. During the tempest, which was the worst one Leland ever experienced, Keeper Richards would ascend the tower frequently to check on the light, and at one point, he noticed the light had started to dim. The vibration of the tower in the storm was apparently causing the wick to drop, so Keeper Richards tied the wick up with a piece of string and didnt have any more trouble with the light.

On June 28, 1914, the lights illuminant was changed from oil to incandescent oil vapor, increasing the intensity of the light to 38,000 candlepower. The light was electrified in 1932, further increasing its intensity to 120,000 candlepower. Light Lists published by the U.S. Coast Guard indicate that Pointe Aux Barques was made unwatched in 1941.

Daniel McDonald, who reportedly retired in 1955 as caretaker of the lighthouse, recalled his time at the station. We sat through lonely vigils in the tower of the lighthouse, keeping a constant lookout for changing weather conditions and ships which might come too close. We were ready for anything  a ship which might run aground, a freighter needing to bring a sick seaman ashore, or a swamped fishing boat which needed help.

The property surrounding the lighthouse was sold to Huron County in 1958 for use as a park, and in June 2003, the lighthouse itself was transferred from the Bureau of Land Management to Huron County. In 2002, a small group of volunteers gathered to clean up the lighthouse so it would be more presentable for visitors. As a result of this gathering, Pointe aux Barques Lighthouse Society was formed to restore and interpret the site. With assistance from the society, a new cedar roof and historically accurate brick chimneys were added to the old keepers dwelling in 2005. The dwellings interior plasterwork has been repaired and painted, and a climate control system has been installed allowing exhibits to remain in place throughout the year.

The Henry-Lepaute third-order Fresnel lens was removed from Pointe Aux Barques Lighthouse in 1969, when a modern optic was installed in the tower. The lens was donated to the City of Harbor Beach the following year and eventually placed on display in the citys Grice House Museum. In 1987, the city, believing that the Coast Guard would not want it to have two lenses, loaned the Point Aux Barques lens to Huron City Museums and retained just the fourth-order Fresnel lens associated with Harbor Beach Lighthouse.

In 2009, a Coast Guard curator responsible for historical assets learned that Huron City Museums was in possession of the third-order lens and attempted to execute a loan agreement with the museum. As part of the documentation required for the loan, the Coast Guard requested a picture of the lens, proof of insurance, and a condition report, but failed to receive a response from the museum.

On October 11, 2012, a formal complaint, stating that Huron City Museum is not properly conserving, protecting, or securing the lens, was filed in U.S. District Court in Bay City, Michigan by the federal government. The Coast Guard requires that its lenses be displayed in museum settings with security, environmental controls, and ultraviolet protection. As the museums lifesaving station that houses the lens had no air conditioning, alarm, or fire-suppression system, the government asked the court to order the museum to return the lens to the Coast Guard at the museums expense.

U.S. District Court Judge Thomas L. Ludington approved a settlement on May 31, 2013 that allowed the Coast Guard to take possession of the lens. Wasting no time, the Coast Guard retrieved the lens the following day and took it to Harbor Beach Coast Guard Station where it was cleaned and restored before being returned to Point aux Barques Lighthouse later that summer.

In 2019, Pointe aux Barques Lighthouse Society began restoration of the assistant keepers dwelling, which had been being used as the seasonal residence of the Lighthouse County Park in recent years. After the two-bedroom dwelling was restored, the society launch an Assistant Lighthouse Keeper Program that allows two to four adults to stay in the dwelling for a week for a nominal fee. These resident keepers served as docents for visitors and help with maintaining the facilities and operating the gift store.

For a larger map of Pointe Aux Barques Lighthouse, click the lighthouse in the above map.

From Highway 25 between Port Hope and Port Austin, turn toward Lake Huron on Lighthouse Road and follow it to lighthouse park. Pointe Aux Barques Lighthouse is located in the northeast corner of the park.

A museum in the keeper's dwelling, which covers the lighthouse and the Thumb Underwater Bottomland Preserve, is open daily, 10 a.m. to 7 p.m., from Memorial Day weekend to mid-October. The tower is only open on select dates.

After being granted permission to restore the assistant keeper's dwelling in 2019, Pointe aux Barques Lighthouse Society launched an Assistant Lighthouse Keeper Program that allows two to four adults to stay on site for a week an served as docents.


Near Pointe aux Barques Lighthouse is a memorial for Lt. Michael Young, who was was killed during a routine training mission over Lake Huron on November 30, 1991. His aircraft, an A-7 Corsair II, became disabled, causing Young to eject. The Corsair impacted in a wooded area near Port Hope, but Young, swept by 50 mph winds, landed in the frigid 38-degree waters of Lake Huron. Rescue attempts failed due to treacherous weather conditions, and his body was never recovered.