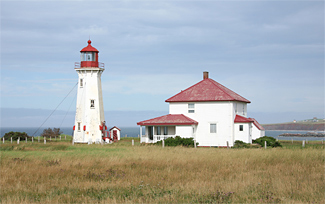 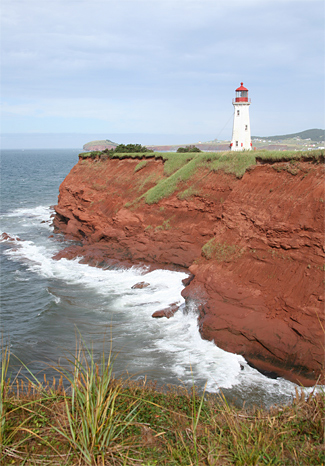 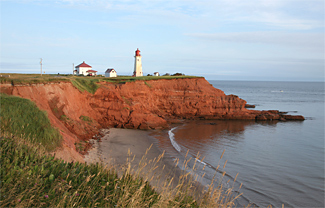 Located in the Gulf of St. Lawrence, more than eighty kilometres from the nearest landmass, the Îles de la Madeleine, if undetected, were a treacherous area for mariners. Between 1855 and 1880, over 200 vessels shipwrecked on the islands. Île du Havre-Aubert (Amherst Island) is the largest and southernmost island in the Îles de la Madeleine. A lighthouse was established on Rocher aux Oiseaux (Bird Rock), the northernmost island in the archipelago, in 1870, and Amherst Island was a natural choice for the islands second light.

Carrol and Sinclair were awarded a $4,600 contract to construct the fifty-four-foot, wooden lighthouse on Amherst Island, while E. Chanteloup was paid $1,155 for its lantern room and $772.34 for its lighting apparatus. The revolving light atop the hexagonal tower originally had two faces, each equipped with two lamps set in twenty-inch reflectors, and due to the lofty bluff on which the lighthouse stood, the light had a focal plane of 107 feet. Though other lights had higher focal planes, Amherst Island Lighthouse is the tallest one every built in the islands.

William Cormier activated the light for the first time on June 30, 1871, and mariners were notified they could identify the lighthouse by its alternate red and white flashes, spaced thirty seconds apart. The total cost for the lighthouse came to $6,828.01, and Keeper Cormier received an annual salary of $300 for minding the light.

In addition to the lighthouse, which was painted white with a red roof, the station also had a keepers dwelling, painted in the same manner, and a red oil shed. The light burned between 400 and 500 gallons of oil a year.

Four wire stays with screw swivels were sent to the island in 1874 to help steady the lighthouse.

During an inspection in 1878, two lamps and reflectors were found in very bad order. Keeper Cormier explained that the lamps had taken fire and burned the reflectors. In 1889, mammoth flat-wick lamps replaced the circular-wick lamps that had been used in the lantern room.

William P. Anderson, an engineer in the Marine Department, and William H. Smith, Chairman of the Board of Examiners of Masters and Mates, visited the Îles de la Madeleine in 1890 and wrote the following.

We have been impressed by the ill-chosen position of all the lights on these Islands. The lighthouse on Amherst Island is on the south point, which is comparatively low, whereas the south-west point is a high bold cape and more prominent which now interrupts the light to the westward, although it can be seen over a small arc to the northward of the high point through a gap in the hills. The light, if kept on Amherst Island at all, should have been placed on the summit of the south-west point. Theoretically the best place for this light would have been on Dead Man's Isle, but this site is so difficult of access that unless for a first class light, it would not be worthwhile to incur the expense of building and maintaining a light there. We question whether the traffic in this vicinity has been and is sufficient to justify such an expenditure.

Despite the deficiency pointed out in 1890, the lighthouse has remained on the southernmost point of Amherst Island. A new keepers dwelling was built at the station in 1951, and the original dwelling was demolished the following year.

Edmond Boudreau, the last keeper of the light, made a couple of interesting improvements to simplify his job. He reportedly cut a hole in the ceiling of the first floor of the lighthouse so the weight that revolved the lens could fall another twelve feet and allow him to get an extra hour of sleep between windings. With the help of his brother, who was an electrician, Boudreau wired up the lighthouse so it could be activated from his bedroom.

As part of "Journées de la culture," the lighthouse on Île du Havre-Aubert was opened to the public on September 26, 27, and 28, 2003 through the efforts of the Corporation for the Preservation of Architectural Heritage of Île du Havre-Aubert and Centre Nautique lIstorlet. Former lighthouse keepers and their families were on hand to help narrate the event, which it was hoped would generate interest in the acquisition of the lighthouse by the municipality of Îles-de-la-Madeleine. More than 600 visitors took advantage of the opportunity to climb to the top of the oldest standing lighthouse in the archipelago and enjoy the view out over the Gulf of St. Lawrence.

The lighthouse was recognized in 2006 as a historic monument by the municipality of Îles-de-la-Madeleine and was nominated to become a heritage lighthouse in 2012. The result of the nomination, which will allow the lighthouse to be transferred from the Department of Fisheries and Oceans to a local organization, will be announced by June 2015. Île du Havre-Aubert Lighthouse was deactivated in December 2011, so hopefully the transfer can occur before the property suffers from neglect. As the keeper's dwelling has been sold into private hands, access to the property is not allowed.

For a larger map of Île du Havre-Aubert (Amherst Island) Lighthouse, click the lighthouse in the above map.