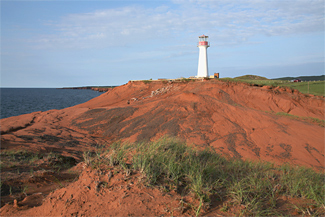 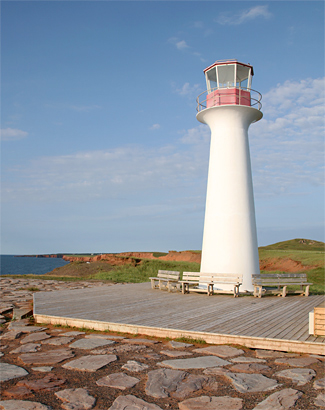 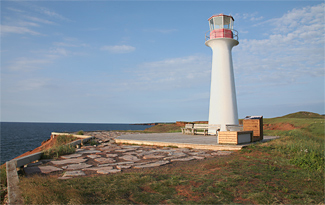 Fourteen miles (twenty-two km) southwest of Point Hérissée on the western shore of Cap-aux-Meules (Grindstone Island), Le Corps Mort (Dead Mans Island) rises from the sea. This large grey rock, devoid of vegetation, resembles a human corpse with its arms folded upon its chest. In 1798, Issac Coffin was granted the Îles de la Madeleine, and while the feudal domination under Sir Coffin and Captain John Townsend Coffin, his nephew, was not pleasant for the Madelinots, it is a humorous thought that a man by the name of Coffin owned Dead Mans Island.

Legend among sailors told of a ghost-ship, manned by a ghastly crew and piloted by a shadowy steersman, which would depart after midnight from the island to ply the rocky shores of Labrador looking for shipwrecks. The ship would convey the souls of the deceased mariners to Dead Mans Island, always returning before dawn.

In September 1804, Irish poet Thomas Moore, while passing the island heard the legend, and penned a poem which concludes with:


Oh! hurry thee on-oh! hurry thee on,
Thou terrible bark, ere the night be gone,
Nor let morning look on so foul a sight
As would blanch forever her rosy light!

The eerie ship didnt need to travel as far as Labrador to find souls lost to the sea. Over 700 shipwrecks have been recorded near the Îles de la Madeleine, with several on frequently fog-enshrouded Dead Mans Island itself.

Étang du Nord Lighthouse was established on Point Hérissée in 1874, to warn mariners of Dead Mans Island and mark the western shore of the Magdalen Islands. The original lighthouse was a square wooden building, twenty-eight feet high, with an attached keepers dwelling. First exhibited on April 20, 1874 under the care of Timothy OBrien, the lighting apparatus was equipped with three twenty-inch reflectors and circular burner lamps in each of its two faces and revolved every three minutes, producing white flashes at a focal plane of 200 feet that could be seen for twenty miles. The total cost of the lighthouse was $5,641.57.

Also located at the station was a steam fog whistle that was put into operation on November 10, 1874, with instructions for the keeper to sound it in fogs and snow storms. The fog alarm produced two eight-second blasts in a minute, with an interval of twenty-two seconds between each blast. The cost of the fog alarm equipment and a structure to house it came to $6,351.69.

The fog alarm was dismantled in 1890 after it was determined that hills on both sides of it completely shut out the sound from seaward. By the time vessels could hear it, they were dangerously close to the outlying reefs. William P. Anderson, an engineer in the Marine Department, and William H. Smith, Chairman of the Board of Examiners of Masters and Mates, also concluded that the location of the light was not optimal, but it remained in place.

In 1898, one of the circular lamps in the lantern room overheated, starting a fire that slightly damaged the lighthouse. A new dwelling was built during 1912  1913 and topped by a new lantern room outfitted with a double-flashing catoptric light.

The current lighthouse was put in place in 1987. Made of fiberglass, the tapered circular tower with an octagonal metal lantern employs a dioptric light to send forth a light that can be seen for eighteen miles (24 km). Its current signature is a white flash every six seconds.

On November 22, 1988, two massive sections of the Duke of Connaught dry dock, which were being towed from Montréal to Sydney, Nova Scotia, broke loose during a winter gale and washed ashore at Étang-du-Nord. The forward section, now rusted into the same red as the nearby cliffs, is evidence that the otherworldly ship from Dead Mans Island is not yet finished with its work.

For a larger map of Cap-aux-Meules (Étang-du-Nord) Lighthouse, click the lighthouse in the above map.

The Fresnel lens from Cap-aux_Meules Lighthouse is on display at Basin Head Fisheries Museum on Prince Edward Island.


Grindstone Lighthouse is a very popular place to watch sunsets. Plan to arrive at least an hour early so you have ample time to enjoy the views of the striking red cliffs in the area as they are illuminated by the orange glow of the setting sun.