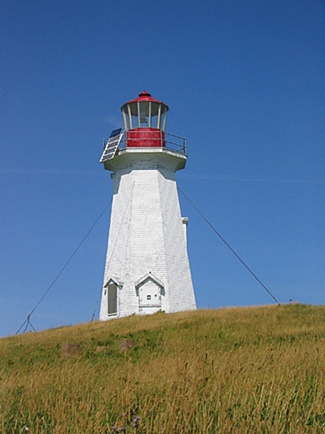 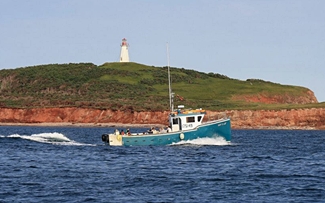 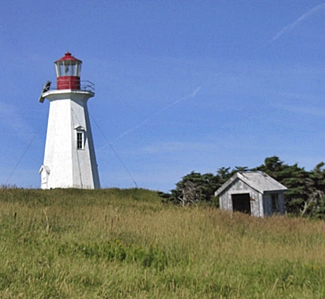 In June 1534, after exploring the rocky shores of Newfoundland, Jacques Cartier came upon Île Brion and entered into his log the first written report regarding the island. This island is very sandy, with good anchorages and passages between the islands, six to seven fathoms. It has the best soil that weve seen, for twenty acres of this soil is worth more than all Newfoundland. This island is full of beautiful trees, prairies, fields of wild wheat, and flowering pea plants as beautiful as Ive ever seen in Brittany, and they seem to have been planted by a ploughmans hand. After erecting his second of many crosses on his journey, Cartier named the island Ille de Bryon after his principle expeditionary patron Philippe de Chabot, Seigneur de Brion and Admiral of France. His crew found abundant wildlife, including bears and foxes, and noted for the first time, walruses, which they described as, great beasts that basked upon the shore, with two great teeth in their mouths like elephants.

Not everyone who found themselves on Île Brion considered it a piece of paradise. At least fifty-six shipwrecks have occurred there. Hydrographic surveyor Admiral Henry Wolsey Bayfield, wrote of the island:

Bryon Island . . . is rather more than 4 miles long . . . There are three reefs off Bryon Island. One off its east end extends near three-quarters of a mile to the north-eastward; another off the west end extends 1 1/2 miles to the westward, and the third, off the sandy S.W. point, 1 1/3 miles to the southward. The soundings extend . . . far off Bryon Island to seaward in every direction . . . but very great caution is requisite in approaching the reefs, for they are very steep, especially that which extends to the southwest.

The first permanent residents of the island were Spencer and William Turner, who were buried on Île Brion after their boat shipwrecked on December 4, 1847. Their gravesite grew to be a tiny cemetery linked to a small community eking out an isolated existence on the edge of nowhere.

Île Brions first permanent house was built in 1851 by the Dingwell family, who occupied the island for nearly a century, with William Dingwell (1854-1907) operating a general store, a lobster cannery, and sea hunting expeditions. The islands population peaked at fifty in 1878.

In 1903, the Minister of Marines and Fisheries of Canada purchased 0.8 hectares on the westerly end of the island from William Dingwell for the establishment of a lighthouse to help guide vessels traveling between the Gulf of St. Lawrence, Miramichi River and Chaleur Bay.

Constructed at a cost of $5,497 by Mr. E. F. Munro of Westville, Nova Scotia, the lighthouse, which stands 755 feet from the extreme west point of the island, is an octagonal, wooden building, with sloping sides, painted white. The original polygonal red lantern was cast iron, but an aluminum lantern replaced it in 1969.

The tower, standing 14.9 metres (49 feet) high, first exhibited its light at the beginning of the navigational season of 1905 using a catoptric system, with a focal plane of 126 feet and range of nineteen miles. The lighting apparatus completed a revolution once every minute, showing three flashes with intervals of fifteen seconds between their points of greatest brilliancy, followed by thirty seconds of darkness. Within the next year, the signature was changed to a revolving red and white light, with one red flash and two white flashes every two minutes, the flashes attaining their greatest brilliancy every forty seconds.

The catoptric system was replaced in September 1906 by a third-order Fresnel, which gave four bright flashes at intervals of five seconds followed by an eclipse of fifteen seconds. Automated in 1967, the light currently has a signature of a white flash every three seconds.

Also at the station were a lightkeepers dwelling, built in 1904, and a barn, built in 1938. Surprisingly, keepers at Île Brion Lighthouse stayed more than just a couple of years. Procule Chervier, the first keeper, was in charge of the light from 1905 to 1908, and Edward Richard, his successor, served until 1927. A newspaper reporter noted in 1932 that Keeper Edward F. Keatings daughter had only been off the island once, and her knowledge of movies, motorcars, and railways was limited to what she had read in books. A noted on Keeper Keatings employee record mentions that he was granted a monthly pension of $11.49 in 1941 for a 16% disability - the loss of sight in one eye due to an accident while discharging his duties on December 29, 1937. Keeper Keating remained on the island for two more years before having to resign due to ill health. Most traces of human life at the lighthouse vanished in 1972, when all of the stations buildings except the light tower were demolished.

With the departure of the Dingwell family in the 1940s, the keepers were left alone on the island. After the close of the navigational season, the keepers and their families would move to Grindstone Island until the shipping lanes reopened in April.

When the lighthouse was automated in 1967, the keepers left for good. Île Brion was purchased by a Texaco subsidiary, SAREP, in 1970 for oil exploration. After no oil was found, the Government of Canada purchased the island and established an ecological reserve of 650 hectares in 1984.

Cartiers paradise now looks much as it did 500 years ago. The lighthouse, declared a historic monument in 2006, still stands atop a sandstone cliff surrounded by over 140 species of birds.

For a larger map of Île Brion Lighthouse, click the lighthouse in the above map.

Five-hour zodiac excursions to Île Brion are offered by Excursions en mer. These trips only go when the sea is very calm, and since it can be quite windy on the Magdalen Islands, trips may happen only once or twice a week. It is best to call Excursions en mer a day or two before you arrive on the islands and have them put your name on a list.