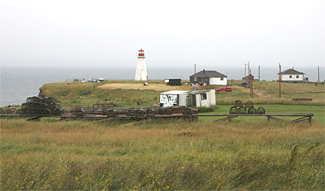 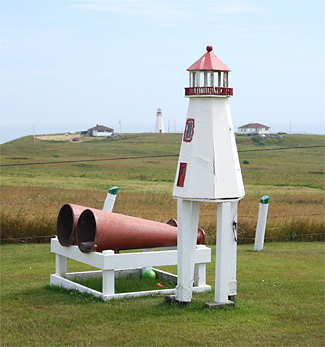 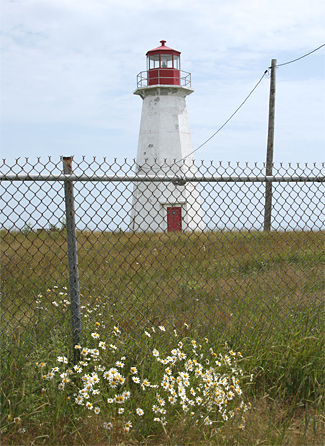 Pentagon-shaped Entry Island is the first island seen by visitors approaching the Magdalen Islands by ferry, and its treeless profile is easily recognized due to Big Hill, whose summit is the highest point in the archipelago. Entry Island also has a couple of other distinguishing characteristics: it is the only inhabited island in the archipelago not linked to another island, and its inhabitants, primarily descendants of Scottish settlers, speak English. A lighthouse consisting of a square, wooden tower attached to a attached keepers dwelling was built on the southeast side of Entry Island in 1873 at a cost of $5,818. The twenty-eight-foot tower displayed a fixed red light using an illuminating apparatus with six circular burner lamps and reflectors on the lower tier of an iron frame and three mammoth flat-wick lamps and reflectors on the upper tier. James Cassidy, who earned an annual salary of $250, activated the light for the first time on April 20, 1874. Thanks to the lofty bluff on which the lighthouse stood, the light had a focal plane of ninety feet, allowing it to be seen for up to twelve miles.

The following account of a visit to Entry Island Lighthouse in 1883 was recorded by S.G.W. Benjamin in The cruise of the Alice May:

We first went to the light-house. It is kept by Mr. James Cassidy, a very civil and intelligent man, who has been there since the light was first erected. He invited us into his house, which adjoins the tower. Mrs. Cassidy also received us with refined affability. Books and magazines were abundant on the tables, and there was a true home-like aspect to everything about the house which seemed very attractive, and was almost unexpected in that solitary spot. Mrs. Cassidy lamented the lack of educational advantages at Entry Island, and said she had been obliged to send her children to Nova Scotia for a schooling. She seemed to occupy an unusually lonely position, because the house is a mile from any other, and the Cassidys are entirely unrelated to the other residents at Entry.

Wiliam P. Anderson an engineer in the Marine Department, and William H. Smith, Chairman of the Board of Examiners of Masters and Mates, visited the Magdalen Islands in 1890 and included the following in their report:

We have been impressed by the ill-chosen position of all the lights on these Islands. That on Entry Island is on a low point on the south shore, and is cut off on all bearing from north-east to south-east by higher points to the eastward. If it had been placed on one of the loftier capes, 1/2 mile farther eastward, it would have shown over the whole arc it now illuminates, and in addition, would have been seen more to the eastward and also to the northward in the direction of the Bird Rocks, which would have been an important advantage. If at any time it should become necessary to rebuild this lighthouse, or if the dispute with Mr. Dixon respecting the right of way should end in any serious trouble, we would recommend its removal.

It wasnt long before the relocation of the light recommended by Anderson and Smith was carried out, as the 1905 Annual Report of the Department of Marine noted a new lighthouse had been built on Entry Island.

The light heretofore maintained on the south side of Entry island in the Magdalen islands group was discontinued and the lighthouse torn down and replaced by a new lighthouse erected on the summit of a steep hill on the south side of the island towards its east end, about 3/4 mile from the site of the old lighthouse. The lighthouse stands on ground 250 feet above high water mark, and is an octagonal, wooden building, with sloping sides, painted white, surmounted by an octagonal iron lantern painted red. The height from its base to the ventilator on the lantern is 32 feet.

The light shown is a fixed white light, elevated 277 feet above high water mark. and visible 16 miles, over an arc of 270 degrees.

A new dwelling was built at the same time to replace the old one formerly attached to the tower.

In 1908, the new fixed white light was changed to a fourth-order occulting light, produced by burning petroleum vapour under and incandescent mantle and visible for four seconds followed by a six-second eclipse. With erosion threatening the 1905 lighthouse, the lantern room was moved from the tower to the apex of the keepers dwelling in 1910 and was placed atop a new twelve-foot concrete base the following year atop a hill farther inland. A fog alarm was completed on the point where the lighthouse stands today in 1923, and went into service in July of that year.

In 1927, a new, square, wooden lighthouse, topped by lantern room, was built near the fog signal building, and the light atop the hill was discontinued. This new lighthouse had a kitchen, dining room and sitting room on the main floor, and four bedrooms on the second level.

Daniel K. McLean, keeper of the lighthouse in the 1930s, was asked if he was bothered by the fog alarm. His response: The only time I heard the siren was once when it wasnt sounding. One foggy night, when McLean was sleeping and his assistant was standing watch, the foghorn missed a blast, and McLean immediately woke up with a start. At one point during Keeper McLean's service, the lighthouse was home to his wife, eight children, and two assistants.

The present Entry Island Lighthouse, an octagonal, concrete tower that stands forty-eight feet tall, was built in 1969. The two former keeper's dwellings, which have been moved just off the lighthouse property were built in 1965 and 1967. The 1905 dwelling has been relocated but remained standing in 2013. The 1927 lighthouse was sold in 1982 to Ruben Aitkens, who tore it down and used the lumber to build a house on the island. The metal horns used in the fog signal can be seen on the lawn of the McLean home, near the community church. John McLean served as keeper of the light until 1988, when it was automated.

As you stand near the current lighthouse and look north, you get this view, in which you can see the sites of the former lighthouses and the 1905 dwelling. You can hike to the top of Wash Hill and see the foundation of the 1910 lighthouse.

For a larger map of Île d'Entrée (Entry Island) Lighthouse, click the lighthouse in the above map.

Once on the island, go south on Chemin Lighthouse for 600 metres, then left on Chemin Main. After a kilometre, turn right onto Chemin Mountain and continue 300 metres to the lighthouse.


The most famous resident of Entry Island is not a person but a horse. You can visit the grave of Farmer the horse while on the island and learn the role the lighthouse played in his incredible tale: "Farmer was a horse that lived on Entry Island and his owner was Richard McLean. Farmer loved Entry Island and had an exceptional sense of smell. One winter in 1923, some of the local farmers harnessed up their horses and traveled across the ice-bridge that formed between Entry Island and Amherst in the wintertime. Sometime during that night, Farmer was sold to a man named Curtis Quinn who lived in Grosse Ile. Farmer grew very lonely and wanted only to be back on Entry Island. One day in June someone forgot to close the gate and Farmer escaped. He galloped to the ocean and tried to smell Entry Island. He followed the shoreline for four days, all the way back to Amherst and then finally, he could smell home. Farmer started into the water, terrified, and began to swim home. He followed the familiar smells and the sound of the lighthouse foghorn until he finally reached Entry Island. Farmer was home and there he stayed for the rest of his life."

The story of Farmer the horse can be found in the children's book A Horse Called Farmer.