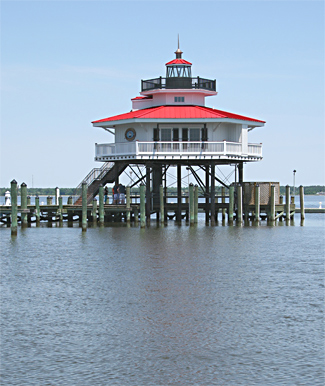 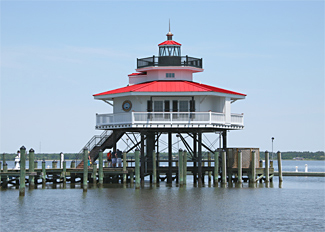 The Choptank River, the largest on the Delmarva Peninsula, empties into the Chesapeake Bay between the southern end of Tilghman Island and Cook Point. The Choptank were a tribe of Native Americans, and the name is thought to mean a stream that separates.

In January 1870, lightship LV-25 was stationed at the junction of the Tred Avon and Choptank Rivers. This was the northernmost station in Chesapeake Bay for a lightship and also one of the shortest lived. The 1871 Annual Report of the Lighthouse Board provides details on the Choptank Lighthouse, which replaced the lightship.

It is designed, under the general law, to replace the Light-vessel at this place, which serves to mark the entrance to the Choptank River, by an iron screw pile Light-house, similar in construction to those at York Spit and Wolf Trap, on the Chesapeake Bay, omitting four of the fender piles. The Light-house will stand in eleven feet water, mean tide, on a bar at the mouth of the river, distant about one and a half mile in a southwest direction from Benonis Point, and marking three channels. After due public notice a contract was made in March with the lowest bidder, for the construction of this Light-house. The iron-work has been prepared and the superstructure framed. It is expected that this Light-house will be completed by the last of October, and enable the Light-vessel to be permanently withdrawn.

The lighthouse was not completed until December 1871, due to the hard nature of the river bottom and the contractors lack of experience. When finished, the lighthouse consisted of a hexagonal, frame building, surmounted by a lantern and supported by a foundation of six screwpiles. An additional four piles were fender piles that served as icebreakers. The piles were painted red, the lighthouse white, and a fixed white light was exhibited from the lantern room using a sixth-order Fresnel lens. In April 1881, a fifth-order lens replaced the sixth-order lens to increase the range of the light. The station was also equipped with a fog bell that was struck by machinery once every ten seconds during periods of reduced visibility.

When heavy ice floes in 1881 damaged three of the four pile fenders set up to protect the lighthouse, the keeper, concerned for his safety, abandoned the station. After an inspection revealed that the foundation piles under the lighthouse were not significantly damaged, the keeper was asked to resign for having acted in panic. The lighthouse wasnt so lucky in January 1918, when mountainous ice floes with a height of thirty feet built up around the structure and forced it off its pile foundation. The keeper was able to remove the valuable lens, but the structure was a total loss.

Rather than build a new lighthouse, the Lighthouse Service opted to move the Cherrystone Bar Lighthouse, which had been serving near Cape Charles City, Virginia since 1859, roughly 100 miles up the bay to Choptank River. On December 15, 1919, Cherrystone Bar Lighthouse was placed on a lighter and towed to Cape Charles City, and an automated light and bell, reportedly the first to be used in the country, took its place.

On April 1, the former Cherrystone Lighthouse was towed up the bay to its new home. Keeper Walter S. Hudgins, who had all of his personal belongings in the structure, continued to live in the lighthouse after it was discontinued and even made the trip up the bay in it. After the lighthouse was shifted from the scow to its new foundation, the light at Choptank River was re-established on June 9, 1921. A fifth-order, Henry-Lepaute lens was employed in the lantern room to produce a fixed white light, with red sectors showing between 187° and 199°, and 316 ° and 345°. A 750-pound bell, manufactured in 1858, continued the stations fog signature of a single stroke every ten seconds.

The lighthouse had four rooms and contained three cisterns, two cypress and one iron, to store water collected from the roof. Harold Messick was the last keeper of Choptank River Lighthouse, which was dismantled in 1964 and replaced by an automated light mounted on the screwpile foundation. Harolds son Jack fondly remembered stays at the lighthouse during the summer when he would hunt for crabs in the riprap near the lighthouse, play with the stations dog Chop (short for Choptank), and listen to the Dixieland music and laughter as steamboat excursions would pass by. Jack recalled that during the hot and humid summers, the keepers didnt wear their uniforms unless a Coast Guard captain was expected for an inspection. No one wore anything but underwear, Jack says.

The Choptank River Lighthouse Society was formed by local residents to construct a replica of the screwpile lighthouse to welcome boaters to Cambridges marina. Architect Randall Kipp, who had developed plans for the Stingray Point Lighthouse replica in Deltaville, Virginia, was hired to do the same for a Choptank replica, using drawings from the National Archives. The society set a goal of raising $600,000 for the project, and this was achieved with 66% coming from the private sector and 33% from the public sector, including a $230,000 bond bill.

Salisbury-based GGI builders was selected as the contractor for the lighthouse. Construction was launched in August 2011, when the first of seven seventy-foot piles was driven into the riverbed. The foundation was completed in late October, and work on the cottage started in early February 2012.

The replica lighthouse was officially dedicated during a ceremony held on September 22, 2012. People gathered at Long Wharf Park and in boats on the water to witness the official lighting of the lighthouse at dusk. Half of the lighthouse is occupied by the dockmaster of the Cambridge Municipal Yacht Basin, while the rest serves as a mini-museum. Exhibits include panels on the history of the lighthouse and Dorchesters maritime heritage. A beautiful wooden spiral staircase, built around a central support pole, winds up the tower to the watchroom.

In May 2015, the lighthouse kicked off the opening of its third season by celebrating the addition of a fog bell and striker, a fifth-order Fresnel lens, and a twenty-two-foot launch named Miss Polly, which is suspended from davits. Construction of the launch was funded by the Pauline F. and W. David Robbins Charitable Foundation and the Heart of Chesapeake Country Heritage Area, while the lens and fog bell are on loan from the Coast Guard.

For a larger map of Choptank River (Replica) Lighthouse, click the lighthouse in the above map.

From the southern end of the bridge over the Choptank River in Cambridge, go west on Maryland Avenue, which will become Market Street. After crossing a bridge, turn right onto Academy Street and then right onto High Street. Continue to the end of High Street where you will find Long Wharf Park and the replica of Choptank River Lighthouse.

Choptank River Lighthouse is open daily for free, self-guided tours, from 9 a.m. to 6 p.m., May through October. During the off-season, call (410) 330-8016 to make an appointment for seeing the interior of the lighthouse. For the latest news on the lighthouse, check out its facebook page.

The lighthouse is owned by the City of Cambridge. Grounds/tower open.