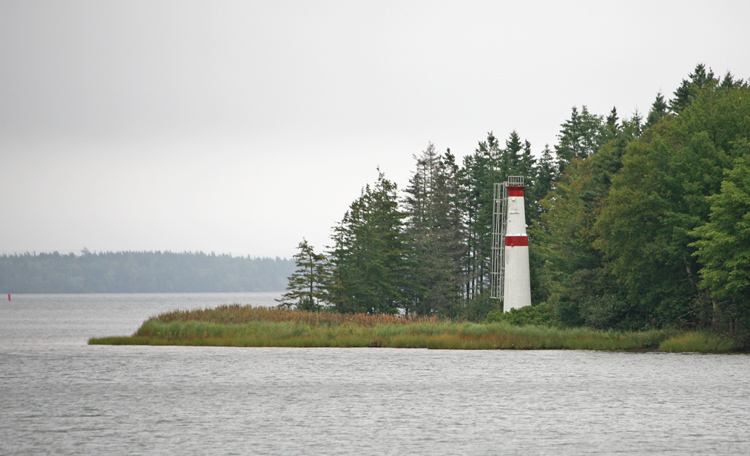 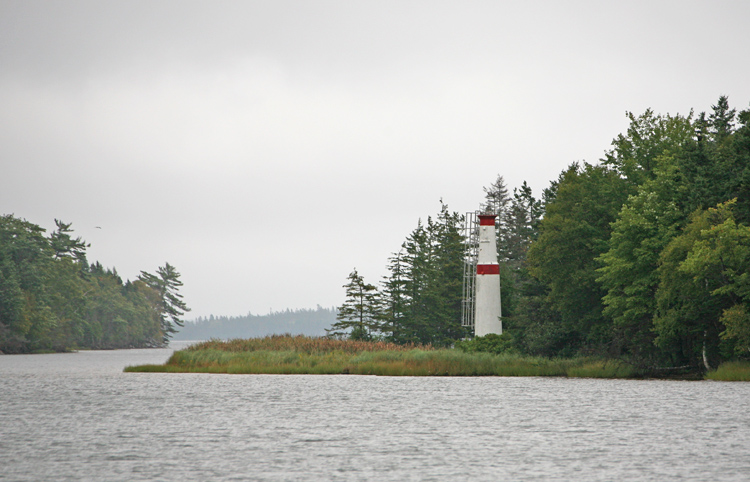 In 1880, the Department of Marine announced the completion of a lighthouse at Little Narrows:

A lighthouse has also been erected at Little Narrows, in the Bras dOr Lake, Cape Breton. The building is a square wooden tower painted white, thirty-five feet high from base to vane. It is built on a foundation of hemlock posts. The contract was awarded to Mr. Neil McKenzie for $390.

The lantern is of iron, 5 ¼ feet in diameter, having six sides, three sides glazed with plate glass, 30 x 30 x 3/8 inch, and the other three sides blank. It is provided with two large flat-wick lamps, 18-inch reflectors, and one lamp of same kind without a reflector.

The light will be fixed white, elevated 40 feet above high water, and should be seen for a distance of eight miles. It will be put in operation on the opening of navigation in the spring of 1881.

By Order in Council of 29th October, 1880, Mr. John Ferguson, of South Side Little Narrows, has been appointed keeper at a salary of $120 per annum, to date from time light is put in operation.

In 1924, a sixth-order Fresnel lens and a duplex lamp replaced the lamps and reflectors previously used in the lantern room. A new lighthouse tower was erected at Little Narrows in 1950, and not long after this, the light was converted to battery operation and de-staffed.

By 1980, the tower at Little Narrows had started to lean as the foundation posts were rotting away. Rather than make extensive repairs, a temporary light was displayed from a mast starting in October 1980 and continuing until a white fibreglass tower was erected on the point two months later. This tower, like several others deployed in Nova Scotia, had two red bands, one near its middle and one close to the top.

For a larger map of Little Narrows Lighthouse, click the lighthouse in the above map.

The lighthouse site can be viewed from the Little Narrows Ferry.

The lighthouse is no longer standing.