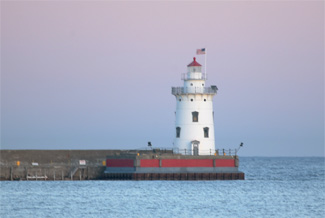 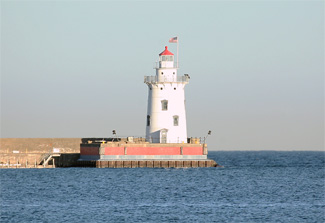 After careful consideration by a board of officers from the Corps of Engineers, Sand Beach was selected in 1872 as the site for an artificial harbor to provide refuge for mariners caught in a storm in the southern portion of Lake Huron. Construction commenced in 1873 on a project that provided for a breakwater of stone-filled cribwork to shelter an area of some 650 acres. When completed in 1885 at a cost of $975,000, the breakwater provided the only safe refuge on the western coast of Lake Huron between Tawas Bay and the St. Clair River, a distance of 115 miles. The breakwater commenced near the shore, three-quarters of a mile north of the dock at Sand Beach, and ran roughly east for 500 yards, followed by a 100-yard gap for the harbors northern entrance and another 100-yard segment of breakwater. From this point, the breakwater angled southeast for 1,320 yards, before turning due south for another 100 yards. A gap of 200 yards was left for the harbors eastern entrance, and the breakwater then continued south for another 633 yards.

A pierhead light was placed in operation on October 25, 1875 at the angle of the breakwater to mark the structure until the project was complete and additional lights could be built. This first light consisted of a square, open-frame tower surmounted by an octagonal lantern room. A fourth-order lens was used to produce a fixed white light at a focal plane of thirty-five feet.

Anticipating the completion of the breakwater, the Lighthouse Board entered into a contract for duplicate steam fog signals, and these were delivered in October 1883. Construction of the foundation crib for the primary light to mark the harbors eastern entrance began on May 19, 1884, and was completed just over a month later on June 25. This wooden crib was positioned on the northern side of the entrance behind the breakwater in twenty-eight feet of water. After the crib was filled with stone and planked over, the building of the superstructure was deferred until the next season.

Work at the site resumed in May 1885. First, a concrete pier, forty feet wide and sixty feet long, was built atop the wooden crib. This concrete foundation rose ten feet above the lake and contained a circular cellar with a depth of seven feet and a diameter of sixteen feet for the lighthouse and a second cellar for the fog signal building. Atop the foundation was erected a circular, cast-iron tower that rose to a height of forty-four feet, four inches. The lower three stories of the three-quarters-of-an-inch-thick, cast-iron tower were lined with brick and lighted by rectangular windows, while the fourth-story, watchroom and lantern room were lined with wood and illuminated by porthole windows. The tower gently tapers from a diameter of twenty-two feet at its base, to eighteen feet at the parapet.

The lighthouses daymark was originally a brown tower with a black lantern room, and the characteristic of the light was fixed white varied every ninety seconds by a red flash. Two panels with ruby screens revolved around the outside of a fixed, fourth-order lens to produce the red flashes. The revolutions were controlled by a Stevens clockwork mechanism, powered by a weight that passed through the floor of the lantern room and down a fifteen-foot-long drop tube.

The steam fog signals were housed in a building situated three feet north of the tower. The building measured twenty-two by twenty-nine feet, and its framed roof and walls were lined, inside and out, by iron and filled with lime and sawdust. The ten-inch steam whistle sounded a five-second blast every thirty seconds during periods of reduced visibility. The fog signal was typically in use for about 175 hours each year, consuming around fifteen tons of coal, but in 1886, the steam whistles were in operation for 636 hours.

The main light commenced operation on October 1, 1885, and the fog signal followed suit a week later. To fully mark the harbor entrances, iron, skeletal tripods topped by fixed red lights were established on the south side of the east entrance and the west side of the north entrance on October 1, 1885. The open framework tower erected in 1875 was relocated to the east side of the northern entrance on September 15, 1885, and its lens was changed from fourth to fifth order on October 1, 1885. On the opening of navigation in the spring of 1886, the characteristic of the main light was changed to alternate red and white flashes, spaced by five seconds, through the substitution of a Barbier & Fenestre fourth-order lens.

A powerful gale of December 4 and 5, 1885 broke in the east doors of the fog-signal house and one of the east windows of the lighthouse, and washed away the bridge that lead from the lighthouse pier to the breakwater. The damage was repaired in June 1886.

In 1899, the town of Sand Beach, justifiably proud of their commodious harbor, changed its name to Harbor Beach, and the cast-iron lighthouse was subsequently been known as Harbor Beach Lighthouse.

Thomas M. Wallace was appointed head keeper of the frame tower in January 1876 with Willis P. Graves as his assistant. As no dwelling was provided, the keepers had to find their own accommodations and row out to tend the light. Loren J. Trescott took charge of the light in 1878, and spent the next forty years at the station before retiring on January 1, 1919 at the age of seventy-four. Trescott arrived in Sand Beach with his parents at the age of twelve, and three years later he started his career on the lakes by becoming a cabin boy on the schooner Forest Queen. After sailing for ten years, Trescott joined the Lifesaving Service in 1869 and served at a station on Lake Superior before returning to Sand Beach to become a lighthouse keeper.

A newspaper advertisement claimed that in April 1891 Mabel, the four-year-old daughter of Loren and Jennie Trescott, contracted the measles followed by a dreadful cough that reduced her to a mere handful of bones. Doctors at Sand Beach and Detroit were unable to help her, but, after the youngster was given two-and-a-half bottles of Dr. Kings New Discovery, she was completely cured. A mixture of morphine and chloroform, Doctor Kings New Discovery was so well established by 1893, that it was a major retailer at the Chicago Worlds Fair, but its claims were later found to be baseless, and the concoction actually harmful.

Alva Trescott served as assistant keeper to his younger brother Loren from 1885 until 1910. On July 28, 1910, Alva was working on the roof of his barn, when he was stricken with a paralytic stroke and fell about twenty feet to the ground. Alva survived the fall but died a few weeks later at the age of sixty-seven.

On April 12, 1900, the color of the tower was changed from brown to white, and later that year the wooden hand railing surrounding the lantern room was replaced by one of wrought iron. The illuminant used in the main light was changed from oil to incandescent oil vapor on June 30, 1914, increasing the intensity of the flashes roughly six fold. The fog signal was changed to a compressed air diaphone on July 15, 1919 at a cost of $8,382.

The keepers at Harbor Beach Lighthouse always kept a watchful eye on the surrounding waters and helped in the rescue of several people. In May 1927, Harold C. Fraser saved three people from drowning near the lighthouse, and on August 28, 1935, Keeper Otto Both and Lawrence E. Lane, his assistant, went to the assistance of three men who were clinging to the bottom of their overturned sailboat.

In 1934, a cable was run from shore to provide commercial power to the lighthouse and fog signal, and a radiobeacon was established at the station. The last Coast Guard crew left the lighthouse in 1967, the same year the fog signal building was removed. The towers Fresnel lens was removed in 1986 and placed on display at the Grice House Museum in Harbor Beach.

A celebration that included a chicken BBQ, live music, and maritime speakers was held in Harbor Beach on July 31, 2010 to recognize the long-awaited transfer. That day also marked the debut of public tours of Harbor Beach Lighthouse.

The energetic preservation society has replaced windows and hardwood floors in the lighthouse, acquired a landing dock to facilitate tours, restored the towers bronze portholes, and installed solar-powered LED lights to illuminate the exterior of the lighthouse. In 2015, a replica fourth-order Fresnel lens, crafted by Artworks Florida, was installed in the lantern room in time for the 130th anniversary of the original lighting of the lighthouse. This video shows Dan Spinella of Artworks Florida installing the replica Fresnel lens atop the lighthouse on July 7, 2015, and this video shows the lens being manufactured. The restored lighthouse serves as a symbol of Harbor Beach and attracts visitors from far and wide for its annual tours.

For a larger map of Harbor Beach Lighthouse, click the lighthouse in the above map.

The fourth-order Fresnel lens from the lighthouse is located in Grice Museum, which is open from Memorial Day through Labor Day.

The lighthouse is owned by the City of Harbor Beach. Grounds/tower open during tours.