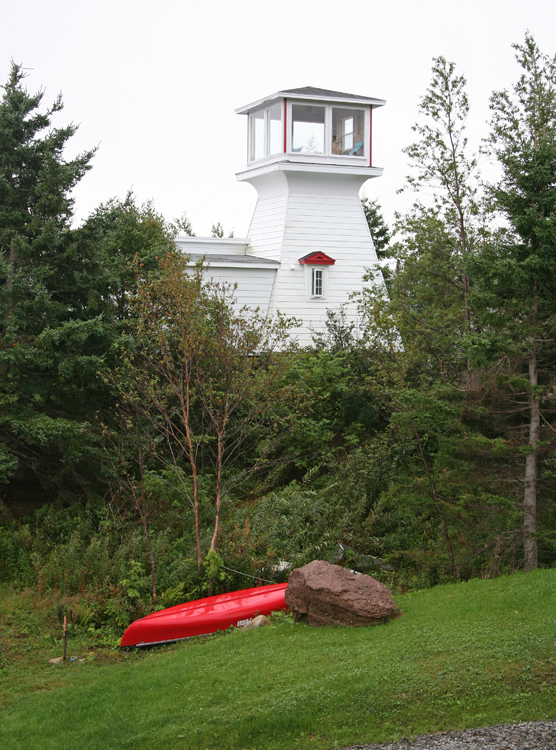 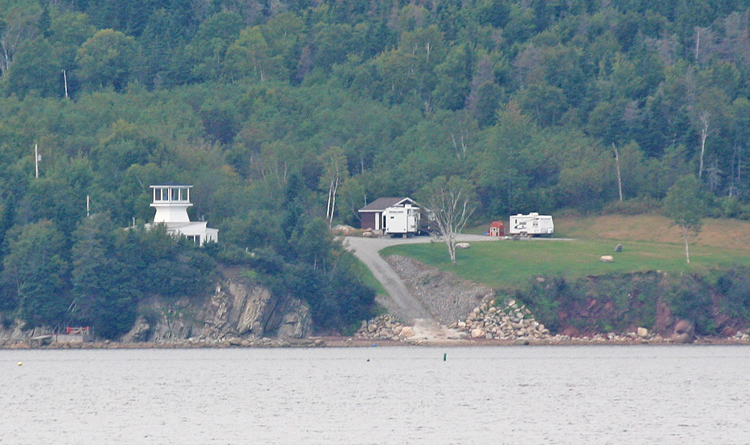 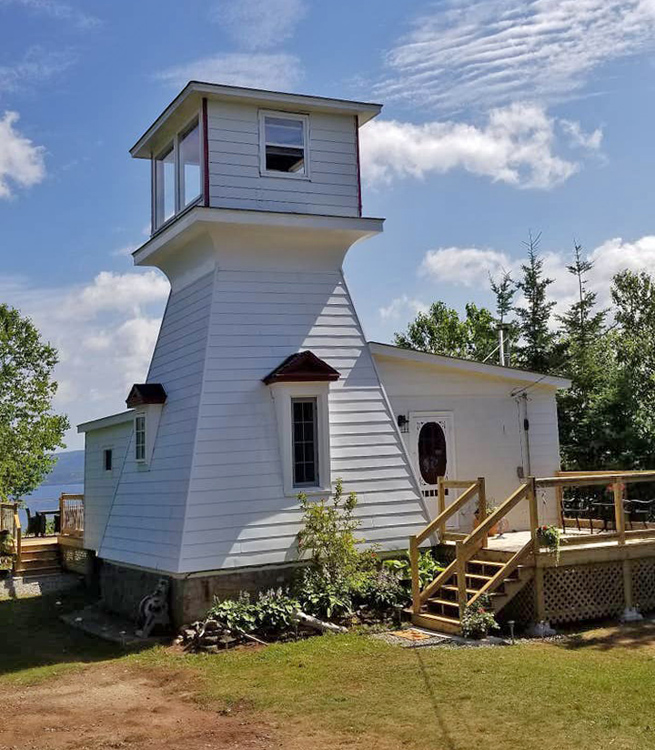 On the northern coast of Cape Breton Island, Cape Dauphin forms the tip of the peninsula that divides St. Anns Bay to the north from Great Bras dOr Channel to the south. Englishtown Ferry runs across the mouth of St. Anns Bay, which is just 124 metres wide thanks to a lengthy sandspit that nearly blocks the entrance to the bay. A light was placed atop the ferry house in 1871 to help mariners locate the bays entrance, and then a second lighthouse was finished in 1906 on Munroe Point, a prominent dividing point well within the bay. The Department of Marine published the following information on the recently completed Munroe Point Lighthouse in 1907:

A lighthouse was established on the southeast extremity of this point. The tower stands on land about 40 feet above high-water mark. It is a square wooden building, with sloping sides, surmounted by a square wooden lantern, the whole painted white. The tower is 32 feet high from its base to the top of the ventilator on the lantern. The light is fixed red dioptric of the seventh order, elevated 67 feet above high-water mark, and visible 9 miles from all points of approach by water. This work was done by contract by Mr. P. L. Macfarlane, of Baddeck, the contract price being $710.

Malcolm Buchanan served as the first keeper of the lighthouse at an annual salary of $150. Fishing vessels and vessels associated with logging in North River, just west of Munroe Point, frequented St. Anns Bay in former times, but now tourism is the dominant driver of the local economy. Munroe Point Lighthouse was automated in 1952 and then deactivated in the 1960s.

French settlers were attracted to St. Anns Bay as far back as 1629, and French Jesuit fathers established a mission to the natives called Ste. Anne. By 1641, the mission was abandoned, and all the French settlers eventually left. In 1820, a band of Scotts let by Norman McLeod, a Presbyterian minister, established a community on St. Anns Bay. McLeod had originally settled in Pictou in 1817, but in 1820 he decided to move to Ohio with his followers. En route, they encountered a storm that forced them to go ashore at St. Anns Bay, and they opted to establish a community there. Part of their settlement on St. Anns Bay included Munroe (Munro) Point, so named after the three Munro brothers who built a home on the point.

After a potato blight struck in 1847-48, McLeod and his followers decided to search for a more fertile place to settle. One of McLeods sons had recently travelled to Australia and sent glowing letters of his life there. In 1850-51, the settlers built two boats, and in October 1851, they set sail for Australia. After finding Adelaide not to their liking, due to the greed and violence that accompanied the gold rush there, McLeod and his followers left for New Zealand in 1853. The group established a permanent home at Waipu, just north of Auckland, and McLeod passed away there in 1866.

In 2001, Gordon and Ingrid Boutilier, owners of the lighthouse, decided to rent it for out for weekly stays to cover the cost of upkeep and erosion control along the shore. Previous owners had built an addition onto the side of the lighthouse and replaced the lantern room with a larger room.

The lighthouse changed hands in 2018, when Rosella and John purchased it from the Speiss family. After the new owners performed some major renovations and built a larger deck, the lighthouse was made available for overnight stays through Airbnb late that summer.

For a larger map of Munroe Point Lighthouse, click the lighthouse in the above map.

Munroe Point Lighthouse is best viewed from the water, although a distant view is possible from NS-312 across St. Ann's Bay near Giant MacAskill Museum.

Since 2018, Munroe Point Lighthouse has been available for overnight stays through Airbnb.